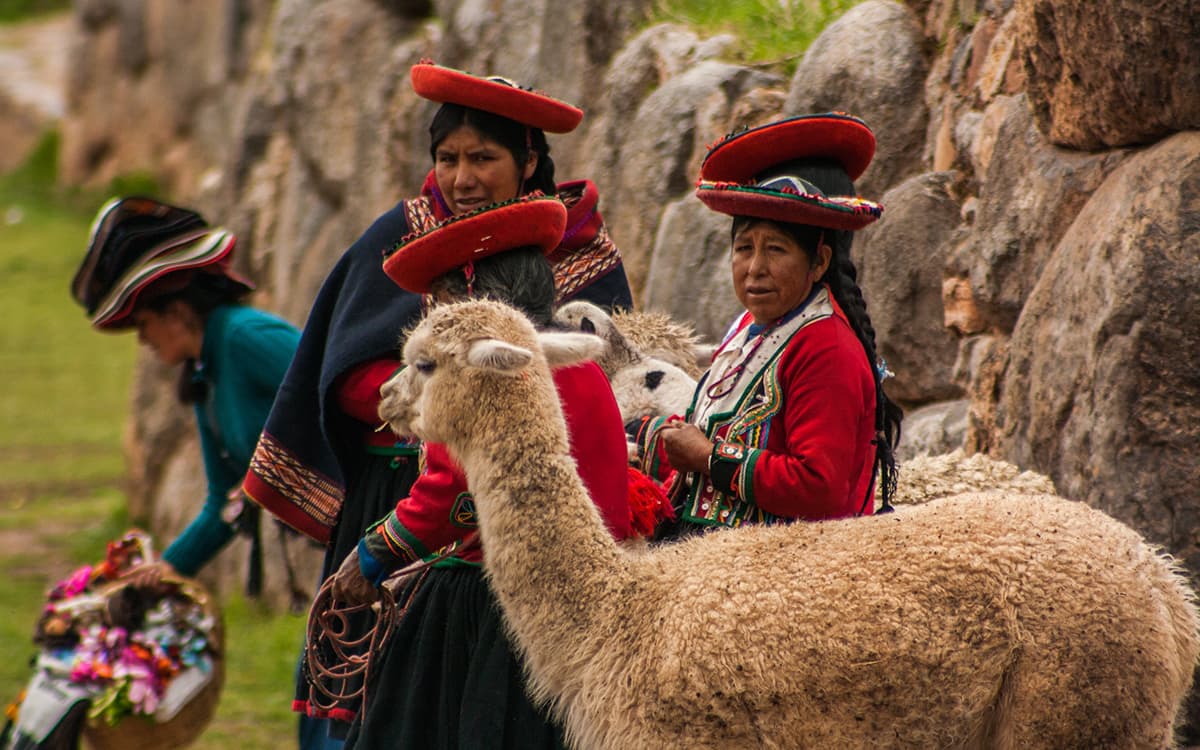 The alpaca is a species related to the vicuña. Domestication has been going on for thousands of years. The scientific name of the alpaca is Vicugna pacos.

The alpaca can be found in archaeological remains of the Mochica culture, in northern Peru.

Characteristics of the Alpaca

The alpaca is similar to the llama and the guanaco; an adult can weigh between 48 and 84 kilos and measures between 81 and 99 centimeters.

It has pointed and large ears, its body is thin, and its long narrow neck stands out, which is more noticeable when it is not covered with wool. Their fur can be brown or multi-colored.

The alpaca is not used as a pack animal like llamas, this specimen has been selected for the production of fibers that are widely used for making very good quality garments such as poncho, chullo, etc.

Habitat of Alpaca and distribution

The habitat of Alpacas is in the Andean highlands, preferably in areas close to humid zones. As for the climate, at night it can reach temperatures below 0 ° C and during the day the average is 16 ° C.

In these semi-arid regions, with an annual rainfall between 400 and 700 mm, grasses predominate. Its habitat includes the foothills of the high mountains, in a range of 3,500 to 5,000 meters above sea level.

Thus, the habitat of Alpacas is in savannas, forests and grasslands, where the temperature could change suddenly and the terrain could be covered with snow for several months.

Previously, the alpaca was distributed in the central and southern region of the South American Andes, ranging from Peru to Argentina. The height of these regions was up to 4800 meters.

However, in areas close to sea level remains of Vicugna pacos were found, which could indicate that they had a greater dispersion. The reduction of habitat may be associated with the establishment in the area of ​​the Spanish conquerors and with the livestock that they introduced.

The ecological impact suffered by the Andean region, as a result of the European invasion of the 16th century, caused the llama and the alpaca to be in danger of extinction.

Currently, the alpaca has a reduced distribution. It is located in the Andean ecosystems of South America, at an approximate height of 5,000 meters above sea level. Thus, it lives in the Andes of Peru, west of Bolivia, the eastern end of Chile, north of Argentina and Ecuador.

In 1980, the introduction of the alpaca to other countries began, so it is present in New Zealand, Austria, the United States and the Netherlands. However, 99% of animals of this species live in South America.

In Perú, you can find alpacas in the inca trail to machu picchu and during the rainbow mountain peru tour.

In relation to Ecuador, the provinces that have the largest number of populations are those of Cotopaxi and Chimborazo.

There are two breeds of alpacas that are characterized by their fibers.

The fibers of this breed grow perpendicular to the body of the alpaca, it has softness, density, curls that gives it a fluffy appearance.

The fiber of this breed’s alpaca grows parallel to its body, which causes curls to form throughout its body. It has softness, density and a more striking luster compared to the other breed.

This is a herbivorous animal, it has a diet composed of grass, hay, tree leaves and species of grasses such as agrotis tolucensis. The alpaca chews its food through 8 movements then swallows it and goes through 3 chambers to follow the process.

Reproduction of the alpaca

The alpaca form harems of 5 to 10 females. The females take between 1 to 2 years to reach sexual maturity while the male can begin to reproduce in the first year of age.

This species is capable of reproducing throughout the year. The gestation period can last between 242 and 245 days. Normally a single calf is born that can weigh between 8 to 9 kilograms. This calf is weaned at approximately the seventh month of age.

Only some alpacas tend to spit, but all have the ability to do so. Generally, the liquid that is expelled contains acids from the stomach, but sometimes it is just air with a little saliva. Usually before doing so, they blow air strongly and lift their heads.

The reason why alpacas tend to spit can be carried out for various reasons. For example, a female could do this when she does not want a male to seek her out to mate. Also, both sexes spit to keep other alpacas away from their food.

The Alpacas and the Incas

Alpacas were treasured as the most important animal for the Inca civilization. Its meat was consumed fresh in traditional preparations such as jerky and chalona; with their wool they made threads and fabrics; Their bones, leather, fat, and excrement had diverse applications such as musical instruments, footwear, medicine, and compost, respectively. Due to their consideration, they were preferred animals for religious sacrifices; The Incas believed that sacrificing an alpaca served to appease their gods.

Textiles were very significant for the Inca Empire because they had religious and social value. A piece of cloth or clothing was considered the most precious gift, it was a sign of social status and was exclusive to members of the royal family and the highest officials of the Inca Empire. Because of this, they allowed only designated artisans to weave the alpaca fiber.

Today, as you pass through the grasslands of the Peruvian Andes, you will see herds of these camelids. But can you tell them apart? There are two classes of alpacas, which can be recognized by the following characteristics:

Huacaya: They are the type that predominates among the alpacas, representing 90% of them. Its main characteristic is its fur, since it is made up of different colors in natural tones. In addition, its appearance is strong and vigorous.

Suri: You can differentiate it by its fiber, which is long, straight, silky and shiny. It is known for its wide range of colors ranging from beige, brown, gray and black tones.

Camelid cattle raising is one of the most important productive and economic activities that take place in the Peruvian high Andean zone; 150 thousand families belonging mostly to Peasant Communities depend on camelid meat and its textile fiber.

Alpaca wool is considered one of the most luxurious in the textile market. It is appreciated by vendors, designers, and clients for its unique attributes:

It is three times stronger than sheep fiber and seven times hotter.

It has excellent insulating and thermal qualities due to having microscopic air pockets inside, which makes it lighter but still very hot.

It has a silky shine that is maintained despite production, dyeing or washing.

It does not contain fat, oil or lanolin.

Does not retain water and can resist solar radiation

It is resistant, achieving very durable and easy-care garments, being a saving for people and greater care for our environment.

It is hypoallergenic due to its great finesse

It has more than 22 natural colors.

Alpaca wool is not only spun, it can also be felted to make beautiful cloths and hand felt alpaca.

The shearing season is once a year, from November to April and is usually done by hand with knives or scissors.

Alpaca wool is used to create different products such as fabrics, scarves, sweaters, blankets, rugs, etc. and it is also mixed with other fibers, generally natural. Due to the beauty and quality of the fiber of this beautiful camelid, thousands of textiles have been exported all over the world, including the United States, New Zealand, Australia and the Netherlands.

During your visit to the Peruvian Andes, do not lose sight of the alpacas, one of the most important auquénidos in the history of Peru. Take home a unique and lasting memory with you!