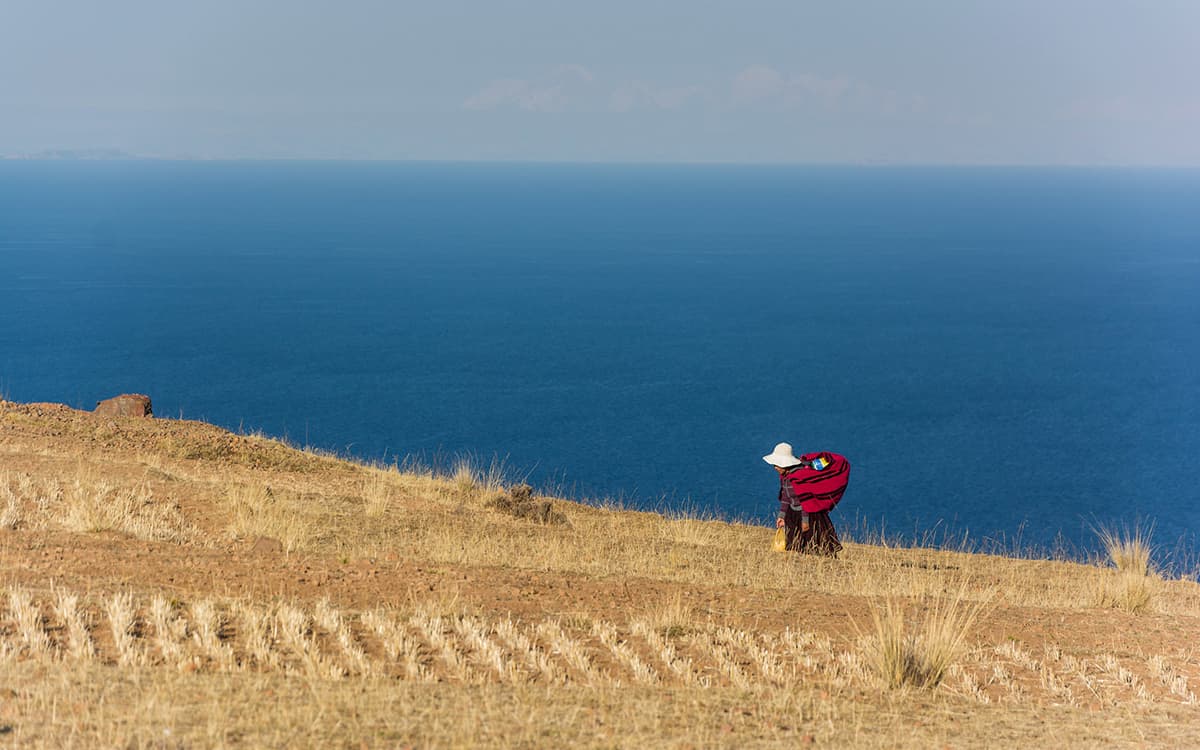 Amantani Island is part of the Puno region, in Peru; and without a doubt it is one of the many beautiful places that this country has. Amantaní Island would be one of the largest in Peru and has many beauties in addition to natural and cultural. So below we will know a little more about them.

Amantani Island is  located in the Puno region, on Lake Titicaca, as was previously mentioned. It has a height of approximately 4150 meters above sea level.

It is a very beautiful place to visit, since in addition to finding many natural beauties; It is possible to meet and share with the people who live in the surroundings.

Approximately 400 families live, who are basically dedicated to cultivation activities; so you will be able to observe many plantations on your tour.

Amantani Island is located in the Peruvian territory of Lake Titicaca, within the geographical limits of the Puno Region, Amantaní district, about 887 kilometers southeast of the city of Lima.

To the north is the island of Taquile, with which it bears many similarities in terms of history and traditions. To the east, specifically opposite, is the Capachica Peninsula.

Lake Titicaca is known worldwide because there is no other navigable located higher on Earth, 3,812 meters above sea level, dividing its cold waters, concentrated in 8,562 square kilometers, between Peru and Bolivia.

It is the island of dreams and enchantment, located 38 km away inside Lake Titikaka. The altitude of Amantani Island is  3817 m.a.s.l. Near the Capachica and Chucuito peninsula. Here are two ceremonial centers called Pachatata (Coanos) and Pachamama (llacastiti), you can see the entire panorama of the lake and the sun gate if the sky is totally clear.

Seen from the air, Amantaní Island has an almost rounded shape, with an area that exceeds 9 square kilometers and a maximum altitude, on the highest of its two hills, of 4,150 meters above sea level, which makes its temperature annual average oscillates in the 13 ° centigrade.

Its population belongs to the Aymara ethnic race and is made up of about 4,000 inhabitants, grouped into about 800 families. Besides the town, there are 10 other communities, among them Santa Rosa, Incatiana and Villa Orinojón. The villagers communicate in the Quechua language, but they also speak Spanish well.

On the island there are two mountains or natural viewpoints, Coanos and Llaquistiti, from whose height it is possible to have a general view of Titicaca and its calm waves, in addition to viewing wonderful sunsets, ideal for taking pictures. On the peaks of these hills, much visited by tourists, nest ruins of ancient pre-Hispanic civilizations, such as the Inca and Tiahuanaco.

The Tiahuacano civilization and culture predates the Inca and centered its domain in the current Bolivian capital, La Paz, but it also encompassed territories of present-day Peru, Argentina and Chile, with an economy based on agricultural and livestock exploitation, and architecture. . It had a port on Lake Titicaca and left the making of textiles as a legacy to the inhabitants of its islands, who have been perfecting the art and teaching it from generation to generation, because it is worth noting that in Amantaní all members of the family weave with age to do it. (See article: Puma Punku)

The cultivation of potatoes, barley and other items form an important part of their income and means of subsistence, along with livestock. In addition, they extract granite rock from the Llaquistiti hill and transform it into utensils and ornamental pieces.

Like their neighbor Taquile, in Amantani Island they are experts in textiles, expressed in chullos, ponchos and coats, of great beauty and color in their design. These can be purchased by visitors in the village shops.

In relation to tourism, the modality that is most practiced is experiential, which refers to knowing the customs of life and traditions of the inhabitants. Also archaeological and ecological tourism mobilize visitors to the island and generate income of money.

The ancestral customs of the islanders, who have resisted modifying their way of life and forgetting their traditions, despite the busy visit of people from other cultures and latitudes; it constitutes precisely an interesting and curious aspect that tourism attracts.

The occupation of the island predates the Inca civilization, but the archaeological remains that remain are reliable proof that this powerful empire, the largest known in South America, extended its dominions over this island territory. The Tiahuanaco culture also left visible traces of its presence in Amantani Island.

Likewise, on the top of the Coanos and Llaquistiti hills, the ancient ceremonial centers Pachatata (father earth) and Pachamama (mother earth) operate, in which religious rites of indigenous heritage are performed annually, which as is known keep a sacred link with the nature.

A custom related to experiential tourism consists of hosting tourists in their simple adobe houses, whose payment includes all meals and the possibility of living together participating in their textile spinning activities or in the field, in cultivation or grazing work cattle.

The allocation of guests by houses is not decided by the tourist, but is done through a rotation system, so that the nearly 50 families that offer their homes as an inn have equal opportunities to offer the service and obtain economic income. , because they also have permission from the municipality to sell handicrafts and textiles.

Another experience that tourists cannot fail to experience is that the locals of the town, especially those who sell alcoholic beverages, offer at night the possibility of wearing and photographing themselves with the colorful typical clothing and rehearsing the traditional dances of the island .

The inhabitants of Amantani Island do not divorce, because it is customary for the marriage to last until death separates them. It is accepted that the couple live long enough to get to know each other well and make the decision to marry when they are safe, although it is mandatory to get married if they have a child. A curious fact is that men are the ones who weave to ask for their girlfriend in marriage.

Single men wear a white and red chullo woven by themselves, which in married couples is all red, while married women go out with a “chuko” or black cape with a multicolored tassel, which is larger in size. single women and covers more.

What to do in Amantani Island?

This island offers many options to enjoy a great vacation. Especially for those people who want to know more about the culture of the place, and interact with the people who live there.

In general, the most common trips to Isla Amantaní, consist of tours for several days, in which you can go with a tourist company or on your own.

While it is true it is not a place that offers many things to do, since it is a more rural place. However, if you are an adventurous person, who likes to know and discover many places, this is for you.

Visit Lake Titicaca: you simply cannot leave the place without having visited Lake Titicaca. This lake is one of the main attractions of the area, the beauty of its landscapes is something you cannot miss.

Staying with a family: one of the things that people who visit Amantaní Island usually do is stay in the house of some of the island’s inhabitants. This gives people the possibility to know and learn more about the local culture; something without a doubt very enriching.

Take a tour of the islands: in addition to visiting Isla Amantaní, another option you have is to take a kind of tour of the nearby islands, such as Uros and Taquile.

Although it is true that this island does not have commercial centers, large businesses or attractions; it is a place that has a lot of natural beauty. If you want to clear your mind, enjoy some pleasant days, in contact with nature, and above all learn other cultures, this island is ideal for it.

It is important that you do not forget to bring your coat, comfortable clothes and shoes, and of course, your camera.

This islands are the best destination in your trip to Perú, as long as the inca trail to machu picchu and the tour to rainbow mountain peru.

It takes around 4 hours for the boats to navigate the 40 kilometers that separate the Amantaní island from the coastal port of Puno. The boats or lake transport are taken, every day early in the morning, in the port of the city of Puno. There are boats that take you directly to Amantaní and others that make a stopover on Taquile Island, which offer tourists the chance to “live” it for several hours.

The most classic tour that is contracted in the city of Puno includes two days and one night of interesting experiences and sharing with the inhabitants of the Titicaca islands, corresponding to the Peruvian side, and a visit to the hills that protect the vestiges of the era Inca and indigenous ritual centers. The first day is divided between the floating islands of Uros and Amantaní, where you spend the night in the houses of the settlers.

The floating islands have a history as exciting as it is ancient. They are built of reeds, a plant that abounds on the shores of Titicaca.

Members of the Uros ethnic group, a native of Bolivia, came to this lake in remote times, fleeing the battles waged by the Incas for dominance of the territory and began to create boats working the reed, which with time and experience were uniting even create these large rafts that are known as floating islands of the Uros.

The second day is dedicated to the island of Taquile, famous for its textile art, Intangible Heritage of Humanity.

The tours to the Peruvian island Amantaní focus on agrotourism, ecological tourism and the experiential attractiveness of the houses-lodging offered by their families to bring the visitor closer to their native customs, in addition to the archaeological ruins for tourists passionate about history and the aboriginal cultures of South America.

A recommendation for visitors is to bring coats, because due to the altitude at which Lake Titicaca is, it is quite cold on its islands, especially at night.