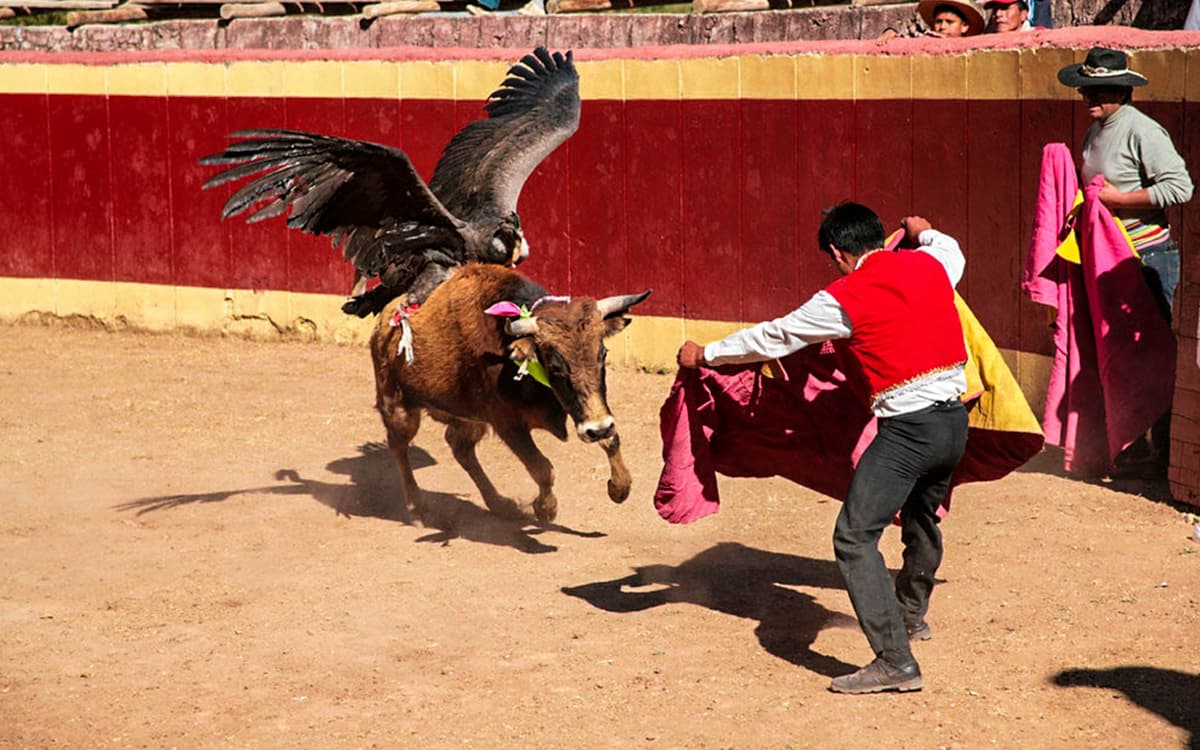 Every year the residents of Coyllurqui, Cotabambas province, Apurímac, capture a condor to celebrate the “Yawar Fiesta” or Blood Festival of Perú, a ritual of bullfighting with condors. The tradition was born during the Spanish colony and continues today as part of the celebrations for Independence Day in some towns in the southern Peruvian Andes. It is said that the bull represents the Spanish and the condor the Inca race.

In the towns where the Blood Festival of Perú is held, the condor is considered a god. The identity and worldview of these peoples is closely linked to tradition.

In Peru, the Andean condor is considered a threatened species. In recent years conservationist voices have emerged strongly calling for the disappearance of the Yawar Fiesta as a protective measure for the condor.

The condor is ceremoniously led to the town, due to the fact that this is a historically sacred animal, and there its wings are adorned, it is given brandy to drink and it is fed very well for what comes next. Already in the ceremony, the condor is placed on the bull’s back and is tied there in some rings that he has, and the two animals try to free themselves during this ritual, the bull tries to free himself from his torture and becomes more furious. At that moment the capeadores enter to face the bull and also the condor. The release of the condor is overwhelming, which advances to the edge of the mountain, opens its enormous wings and launches into space.

If during the Blood Festival of Perú the condor is badly injured or dies, it is taken as an announcement that something very bad is going to happen in this community.

This important festival takes place in the town of Ccoyllurqui, in the province of Cotabambas in Apurímac.

The Blood Festival of Perú used to be celebrated every year in the last days of July.

The festival has its origin in remote times, more exactly in colonial times and occurs in various locations and regions of Peru. According to the oldest accounts, the symbolism used refers to the class struggle, where the bull would represent the oppressive high society and the condor the common people, oppressed and exploited. The condor was always considered a sacred animal in Peru, since pre-Inca times. Its name, Yawar, means “blood festival” and it is currently losing strength, being abandoned in various locations in Peru.

The Traditional Celebration of the Blood Festival of Perú

Precisely in the town of Ccollurqui, its inhabitants hold their festivals with bullfights of all that have symbolic characteristics that become a ritual.

This ceremony takes place since after the conquest of the Spanish to the American Continent, since the bull was taken by them to our lands. Therefore, the bull represents the Spanish, while the condor represents the Peruvian people.

In this celebration, a strong and brave bull is captured, and then the condor is captured, which represents a more difficult and time-consuming process. When the bird is captured, it is led in a ceremony towards the town, since it is a historically sacred animal, it is given brandy to drink and it is fed for what comes next.

When the condor is placed on the back of the bull, and is tied, the fight between them begins to free themselves from this ritual. The condor is desperate to free himself and the bull for the bird to escape and thus stop pecking and hurting his body.

Failing to free themselves, both animals are later separated and released. But, if in a fortuitous act, the condor is badly injured or killed, it is taken by the villagers as an announcement that something bad will happen in the community.

Fight of the Cóndor vs Bull

The Cóndor vs Bull; a fight to the death in which only one of the two animals will survive. If the bird triumphs, the Peruvian natives will have a prosperous year; if bravery wins, it will be a symbol of the superiority of the Spanish colonists.

The festival is a ritual from the beginning, even traditions are followed when it comes to catching the condor.

It is a respected animal in the Peruvian culture, so it is introduced into the town with great care being held by the wings. The condor is capable of skinning the bull, pulling strips of skin from its back and head.

The quadruped represents the invading Spaniards and during the festival it carries the condor on its back, being the victim of its tears. The scene of the bull with the bird clinging to its skin is one of the most representative of the Yawar Fiesta and has several statues in Peru recreating the moment when both walk together in the plaza.

How to get to the Blood Festival of Perú?

From Lima it is approximately 1,039 km and the journey depending on the route chosen for the trip can last between 18 and 24 hours. The town of Coyllurqui is located 8 hours from the city of Abancay (Apurímac).

Condor at risk because of the Blood Festival of Perú

According to Rob Williams, the British director of the Frankfort Zoological Society in Peru, there are only about 500 wild condors left in the entire country, and even fewer remain in Bolivia.

At the root of the problem is the efficiency of modern society in removing carrion from the condor’s habitat.

But perhaps the worst is the open traffic of feathers, bones and other parts of this majestic bird in the tourist market.

The condor is particularly sensitive to these threats. It reaches sexual maturity around 12 years and couples raise a single chick every three years. Of these, half die before reaching adulthood. At the same time, it is not feasible to create protected reserves for the species, which is capable of flying hundreds of kilometers without stopping.

Yawar Fiesta itself, although it did not originate the condor’s demographic crisis, it may be exacerbating it.

Yawar Fiesta is not bloody, none of the ten bulls from the Cotabambas festival are injured, and even less killed. Each animal spends about five minutes in the plaza, with community members trying to provoke it, often without success, before being returned to the corral. At the end, the bull leaves with the condor tied by the legs by ropes that pass under some cuts in the leather of the flanks of the bull, which also returns to the corral after a few brief moments of adrenaline in the plaza.

Untied from the bull, the condor will be released in a couple of days, after feeding. It will be launched from a ravine and thus returned to its habitat.

However, various sectors of the country protested when they considered the Feast of Blood an animal abuse, since one of the two must die and thus determine the fate of the Peruvian people for next year. In response to the complaints, the country’s government enacted a law that prevented the celebration of the Yawar Fiesta, bullfights and cockfights, among other events. Despite the ban, the Feast of Blood remains one of the best known traditions in Peru and the photos will allow it to remain in the memory.