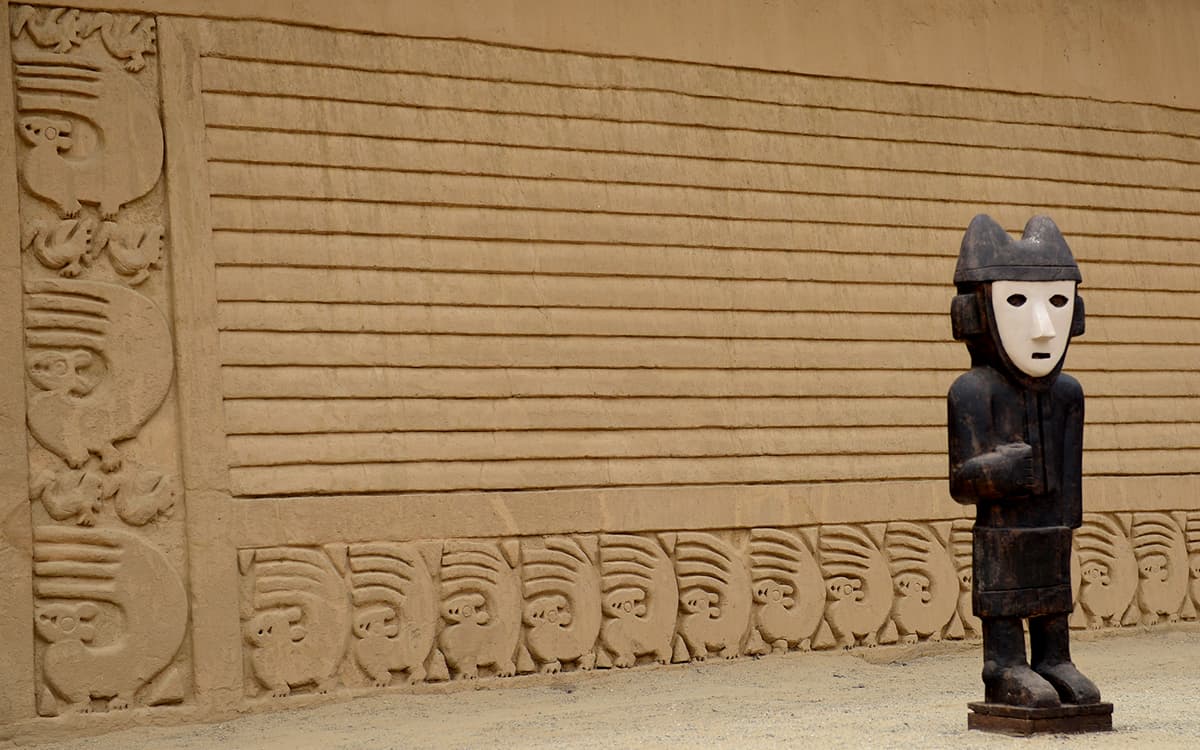 Just a step away from Trujillo, Chan Chan City in Perú stands up, imposing. An impressive mud citadel, declared by UNESCO Cultural Heritage of Humanity.

With a territory of 20 km², Chan Chan City in Perú, the capital of the Chimú kingdom, groups ten walled citadels whose streets and narrow passages lead to wide squares, terraces and truncated pyramids, showing the remarkable degree of planning of the Chimú.

The Chan Chan Archaeological Zone is the largest mud city in our country, it is currently considered a Cultural Heritage of Humanity. The archaeological complex over time has become one of the tourist places highly frequented by local, national and international tourists.

Many people want to know this beautiful mud city in the department of La Libertad, thanks to its significance, historical value and the aesthetics that it maintains over the years.

The Chan Chan Archaeological Zone is located in the Moche Valley in the district of Huanchaco, in the province of Trujillo, La Libertad.

It has a warm climate throughout the year, with an average annual temperature of 18 ° C

Why to visit the Chan Chan City in Perú?

The Chan Chan Archaeological Zone was declared a World Heritage Site by Unesco in 1986 and included in the List of World Heritage in Danger in the same year.

The attraction of Chan Chan City in Perú, in addition to its monumental and impressive adobe constructions, is the presence of high-relief friezes, mostly present in the area and walls of the citadels and among which the presence of geometric and zoomorphic motifs, such as birds and fish.

This is the largest city of the Pre-Columbian era in South America and the largest adobe city in the world. The entire complex covered more than 20 km² and it is estimated that it had more than 30,000 inhabitants at the peak of its glory. The Chimú kingdom, by the way, was a civilization of more than 500,000 people.

After being the residence of the king, queens and priests, Chan Chan served as a commercial, political and administrative center of the Chimú kingdom.

In the center of the city, which stretches for more than 6 km², are the extravagant citadels and palaces. These architectural masterpieces functioned as storage, residence, mausoleum, temple, and administrative center.

Outside these areas were other enclosures and centers dedicated to textile weaving, metalwork, carpentry, etc. On the outskirts of these enclosures were the houses of the farmers. However, only the palaces and enclosures have been preserved.

Although the complex was built in one of the driest climates in Peru, this civilization managed to fertilize its crops and luxurious gardens through an intelligent irrigation system. Getting water might have been a challenge, but since the sea was only a few miles away, there was plenty of food.

One of the characteristics of Chimú society is its rigid division into social groups. One of the most accepted ideas is that the citadels were true palaces in which the select nobility lived, almost completely isolated from the outside world. Their access was restricted. These palaces not only served as elite homes but also gathered inside officials in charge of receiving the products that the people gave as tribute.

It is believed that there were also specialized craftsmen in the service of the nobles and that certain sectors of the palace housed the servants and were clearly differentiated from the area inhabited by the lords.

It is assumed that each of the palaces belonged to a ruler and that when he died, he was buried in the area of ​​the funeral platforms. The palace still belonged to him and his relatives continued to live in it, taking it upon themselves to render him veneration. The next ruler had to build his own palace in which he would live and be buried upon death. This means that the palaces were built one after the other, as successive rulers died. The successors of the mythical Tacaynamo would have been buried there, each in his palace.

To the west, south and northwest of the central area were the marginal neighborhoods made up of numerous houses made of cane and mud, which would have housed a farming and fishing population. In addition, there are several monuments that probably fulfilled religious functions, such as the Huaca del Obispo, Toledo and Las Conchas. Although few people lived in the central area, Bonavia estimates that the entire city must have had a population of 20,000 to 40,000.

Characteristic of Chimú architecture are the clay friezes that decorate the walls. They are figures in flat relief that completely cover long walls. One of the places where the greatest number of friezes is concentrated is Chan Chán with patios and passageways profusely decorated with geometric figures of fish and birds. The friezes are known to have vivid colors, which made their motifs stand out even more.

When the king of Chan Chan died, his first wife (wife / sister) was drugged and a ritual was performed that involved cutting out his heart as a sacrifice. The rest of the 90 wives were poisoned without ritual. All the king’s women were buried together in the palace and covered with sand.

Since the palace would be transformed into a mausoleum, his successor needed to build his own palace. The nine palaces or citadels built over the centuries, resulted in the archaeological complex of Chan Chan.

They weren’t the only human sacrifices in Chan Chan. Young children and animals were sacrificed to the lunar deity, who was believed to make them gods themselves.

The first palace, the Tschudi Palace, is the most restored and is the only one that visitors can enter. There is a ticket office, a gift shop, and a few artisans selling their wares at the entrance and there is security inside the ruins.

The palace is surrounded by large thick walls that are over 10 meters high in some sections. For example, the walls surrounding the ceremonial courtyard are 4 m thick. The city is characterized by displaying ingenious structural knowledge.

The thickness of the walls, but also the supporting structures were specially built to protect it from earthquakes, while some rooms or storage units only have holes in certain walls to only allow fresh air to pass through or protect them from strong winds.

The Chan Chan Archaeological Zone, which expanded for more than 20 km², was the capital of the Chimú kingdom and between 60,000 and 100,000 people lived there.

This city was made up of more than 100,000 streets, walls, workshops, and pyramidal temples that formed the neighborhoods in which the population was distributed. Likewise, the center of the city was made up of ten walled citadels in which great social and urban economic activity took place.

The Chimúes became a highly advanced civilization but with the arrival of the Incas to their territory, their golden age ended. In 1470 Túpac Yupanqui besieged this place, leaving the population completely isolated. 30 years later, the Chimúes decided to rise up against the Incas but their effort was in vain: Huayna Cápac and his army burned and looted the city, leaving it practically in ruins.

Today, Chan Chan is the preferred destination for tourists who come to Trujillo and the citadel never ceases to amaze: in October of this year, the archaeologists working in this place discovered 19 anthropomorphic wooden cultures and a corridor decorated with mud reliefs.

How to get to Chan Chan City in Perú?

To get to Chan Chan City in Perú you must go to Trujillo. From Lima you can find bus tickets to Trujillo for 75 soles ($ 22 USD) and it takes around 10-12 hours to get there.

From Trujillo there are regular local buses that go to Huanchaco, a town on the coast next to Trujillo that must be visited. The bus that has Huanchaco written on it should take you to Chan Chan, but check with the driver before paying. A bus ticket will cost you around 1.5 soles.

If you prefer to take a taxi from Trujillo it will be 10-15 soles.

To visit other sites in Peru that are not Machu Picchu, you can consult this list of 99 things to do in Peru or look north and visit Kuélap, a spectacular pre-Inca fortress.

This entrance fee will give you access to the museum and the Temple of the Sun and the Moon in Trujillo, where is the largest adobe pyramid in Peru, built by the Moche civilization. That is also a good trip to take.