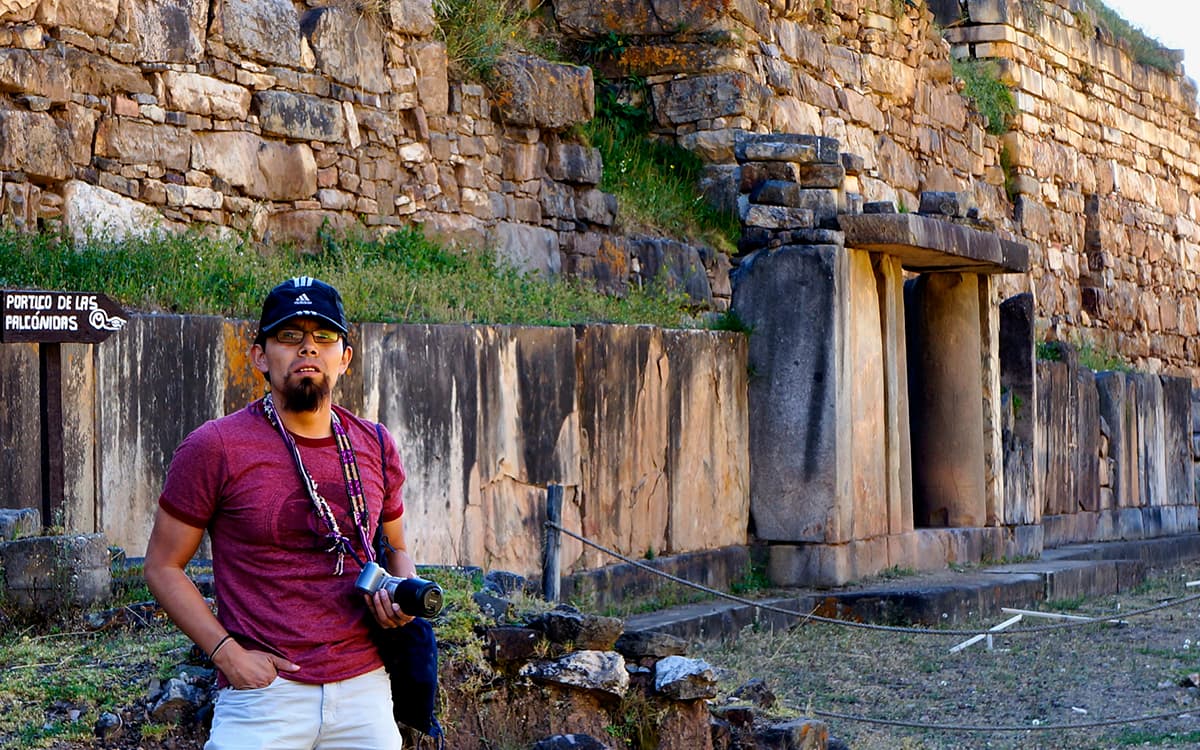 Among the imposing mountains of the department of Áncash, in Peru, there is an enigmatic place that hides a very important part of pre-Inca history. It is Chavín de Huántar, an archaeological complex built by the Chavín culture more than 2,200 years ago. Keep reading and you will know all the details of this exciting place.

Also called the Chavín Castle or Chavín Temple, extraordinary archaeological site (1000 – 200 BC) of the Chavín Culture, it was the main cult and urban center of the Chavín Culture, with the oldest buildings in Peru built in carved stone than any other culture has been able to overcome in architectural techniques. The Old Temple has a group of underground galleries that open an access road to the Lanzón room, an impressive monolithic sculpture. The complex has reception rooms and pyramidal structures built with huge stone blocks.

Declared a Cultural Heritage of Humanity by UNESCO in 1985.

The first visitors who left written their impressions on this archaeological site were the Spanish state officials who after the conquest of Peru in 1532 made “visits” and “taxes” to the new occupied territories or of the “extirpadores de idolatries”, Catholic priests in charge of repressing and “extirpating” any type of cult or adoration that is not Christian. The report written by Antonio Vázques de Espinoza, and whose quote begins this text, is an example of those first news. This happened until the middle of the 17th century. Interest in Chavín is rekindled centuries later, but with other intentions, that of the travelers and adventurers of the 19th century who traveled the world recounting in travel books their impressions of (for them) exotic lands. Many of these travelers bring scientific airs and to them we owe the first modern descriptions of Chavín. Examples of this are Charles Wiener (1880) or Ernest Middeendorf (1893 – 1895).

At the beginning of the 20th century, little was known about Peru’s most remote past. Julio C. Tello, the father of Peruvian archeology, arrived in Chavín de Huántar in 1919 and quickly realized its great importance and considered it the oldest, center and origin of all Peruvian culture. This culture, which for Tello, in his time, was the origin of all other cultures is called Chavín Culture, as is this archaeological site, its main center. As the 20th century passed, archeology found other older archaeological sites that are considered the origins of Chavín. Despite not being the oldest, however Chavín Culture is considered to be the first culture that unified the Peruvian Andes during the historical period called “Early Horizon”.

However, since that time, the fate of Chavín has also been marked by the contemporary politics of Peru. Already in his time, Tello’s theory of “ Chavín as the matrix Culture of the Andean civilization” that gave Peruvian culture an Amazonian origin and a mountain supremacy (from Chavín) over the coast was opposed to Rafael Larco Hoyle’s theory. (Contemporary of Tello) who argued that Chavín was a minor subsidiary site of the Cupisnique culture, whose geographic center was the Moche and Chicama valleys (place of Larco’s main research) on the north coast of Peru and therefore there were (already from that time) a greater importance of the coast on the mountain range. Although its initial protagonists are long gone, this discussion is not yet over.

Chavín de Huántar is an archaeological complex built by the Chavín culture between the 2nd and 1st centuries BC and used until 200 BC. C., when it was abandoned. This impressive place is located in the foothills of the Andes mountain range, at the point where the Mosna and Huacheqsa rivers meet.

The archaeological complex of Chavín de Huántar is the most important in the department of Áncash, in central Peru. This great architectural work had two temples, of which some of its parts are still preserved and in which you will find a mysterious network of labyrinths to lose yourself and feel like a true explorer.

In addition, Chavín de Huántar has ancient and very curious sculptures, among which the monolithic sandeel, the Raimondi stela, the Tello obelisk and the nice nail heads stand out. Some works of art that will leave you speechless!

This grandiose archaeological complex is located in the district of Chavín de Huántar, province of Huari in the Ancash region, 462 km northwest of Lima and 86 km from Huaraz, it has approximately 40 hectares.

It is at an elevation of 3185 m.s.n. m. in the Sierra Oriental de Áncash east of the Cordillera Blanca.

Only part of its architecture has been preserved due to its monumentality, the structures have been built entirely in stone, many of them white granite whose quarries are located in the vicinity of the Kawish tunnel, more than 30 km away.

The temples have a series of platforms with a strong slope on their walls, with a pyramidal profile, they were built in stages.

The Old Temple was the oldest temple, which is shaped like a “U” inside there is an extensive network of passages and interior chambers entirely built in stone.

In the middle of the gloom that reigns in these environments, there are unusual beams of light that burst through the strategic ducts that communicate with the outside world, it is possible to clearly hear the voice of a person many meters away as if were at our side, The famous stone idol known as “el Lanzón” is still housed in one of these interior passages.

The Castle or New Temple, is a major pyramid, the most prominent of the set, not only for its size but for its good state of conservation as well as the expertise displayed in its elaboration. It has two lateral arms or wings called the North Platform and the South Platform, which flank a Quadrangular Plaza, in this plaza the Raimondi Stela was exhibited, which would thus be the main sacred stone of this stage.

All visitors and scholars of this site have been admired by the large number and beauty of figures carved in stone that adorn the various spaces of this wonderful temple. The characteristics of these representations are unique for this site and its time (the Early Horizon, between 800 BC to 200 AD) and based on them (the carved stones) the art of the Chavín culture has been characterized.

Chavín‘s sculptural art is a complement to its architecture. In Chavín art we can now appreciate many examples of the art of stone carving in unique pieces that today we call Estela Raimondi, Obelisco Tello, Lanzón Monolítico, La Medusa and others such as the Cornisa de las Falcónidas, the columns of the main portal of the New Temple, the engraved stones of the Sunken Circular Square and the “Clave Heads”, sculptures of human heads with divine attributes that were nailed as a cornice in the New Temple.

They are huge one-piece monuments, the maximum model of this type is the monolithic sandeel, sculpted in irregular granite, 4.53 meters high, and found at the intersection of the underground corridors of the Old Temple of Chavín.

Also called tombstones, they are also one-piece lithic sculptures, but flat. The best known is the Stela of Raimondi, named after the Italian sage who discovered it in 1872, it measures 1.95 m in length, 0.74 m in width and 0.17 m in thickness.

They are smaller sculptures than the previous ones, and that possibly were part of the tombstones, a clear example is the so-called “Cóndor de Chavín”, which was found incomplete by J.C. Tello.

It is worked in granite and has an irregular shape, measuring 0.80 m by 0.45 m. represents the figure of an almost realistic mythological bird, which in principle was recognized as a condor, although it can also be an eagle or falcon.

It is sculpted in high, low and flat reliefs, representing two mythical deities, or in any case, a double hermaphrodite god (male and female). There are also secondary divinities and various foods (yucca, pumpkin, achira) skillfully represented.

They owe this denomination of clavas to the fact that they end in an extension, like a nail, which allowed them to be easily embedded, at symmetrical distances, in the facade of the Temple or Castle of Chavín, it is considered that they were the guardians of the Temple, they were worked in sandstone rock, of different consistency, quartzite and granite.

Touring the country and getting to know the different cultures, ways of life of the inhabitants and of course the wonderful landscapes will be a trip full of adventure and personal satisfaction, so do not hesitate to contact Waman Adventures, since we are a company responsible for your comfort and satisfaction throughout your journey, with the responsibility and punctuality that characterizes us. We recommend you to visit another impressive destinations in Cusco like the tour to rainbow mountain peru or the humantay lake tour from cusco, which only takes one day. But if you are gonna to stay more days in Perú, other archaeological places you can know will be the choquequirao trek peru, the salkantay trek to machu picchu, and the classic inca trail 4 days 3 nights.