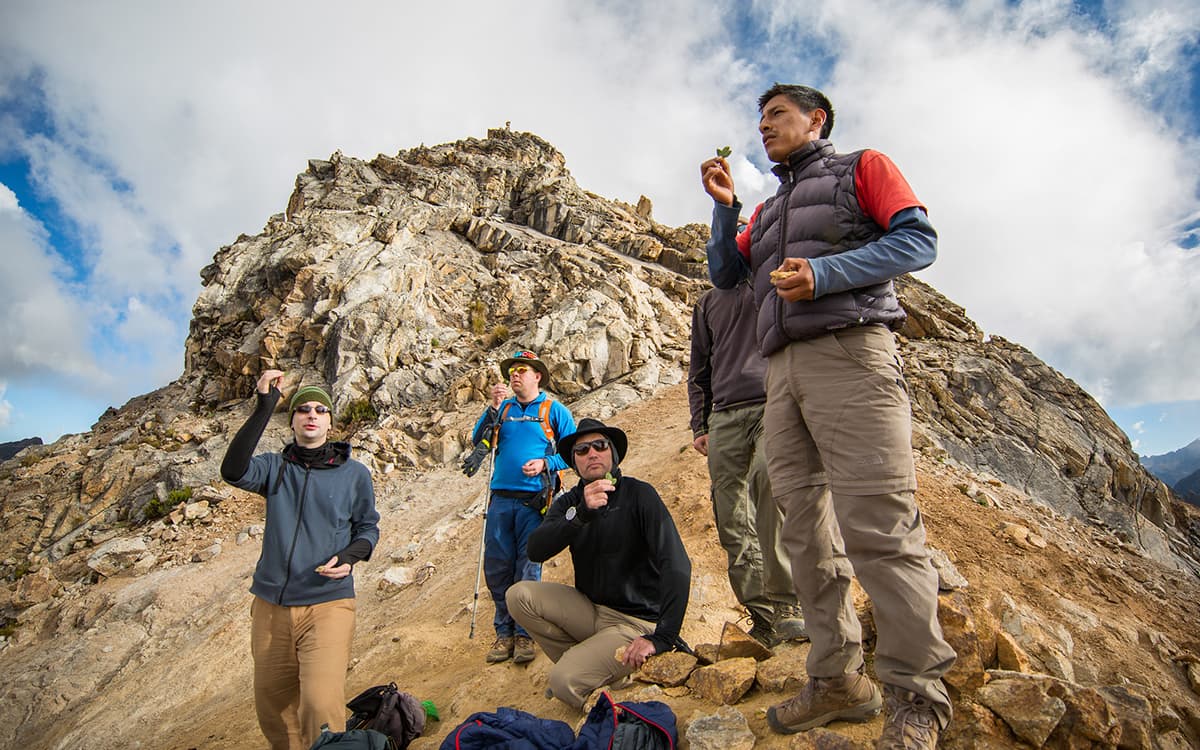 The coca leaves in Perú is a plant related to medicine since time immemorial, a plant whose leaves were offered as gifts to deities. Ancient populations probably knew all the aspects and effects of use in varying amounts, both in the body and in the nervous system. As a result, they reserved its use for kings, priests, and their favorites for the most important occasions. Subsequently, various sectors of the industry, including the pharmaceutical and agri-food sectors, have begun to study and improve its properties. In fact, these leaves possess rare and beneficial properties. The greatest merit of the coca leaf recognized in it is that it serves as food and as a stimulant.

There are many legends, many mystifications and many clichés about the use of coca in the Andes and among ancient populations. It is assumed that the Indians with the use of coca endured the long and bitter work, traveling for long periods at prohibitive altitudes and doing very heavy work. The chronicles tell us that «the native takes a small amount of leaves (one or two dramas), chews them forming a kind of bole that he calls acullico, to which he joins a fragment of alkaline matter (cooked potatoes and ash rich in potassium) called llipta ». This alkaline substance is used to facilitate the secretion of saliva and to soften the inferior quality of coca leaves, sometimes very hard. For the same purpose, lime is used as a substitute for llipta.

It is known that the use of coca leaves in Perú, through chewing, is certainly very ancient and dates back to a couple of millennia before Christ. Being a tropical plant, its use was not relegated only to the Andean populations who had to try to negotiate it through trade with the populations of the tropical zones. The coca leaves, therefore, were not a commodity.

The coca leaves in Perú, gathered in a leather bag, were the legendary companion of the Indians of Peru, Bolivia, Chile, Argentina and other provinces of the colony. Reporters always report that the acoustic to the Indian is the food, it is the stimulus, it is digestive, it is the comfort, it is everything. Any deprivation for the Indian, except that of coca leaves. In some places, the leaves are pulverized in the mortar and kept in a herbaceous package mixed with the ashes of Cecropiapalmata.

The Peruvian Hipólito Unánue, in the 18th century, affirmed that “in situations of food shortage, especially protein sources, such as meat, providence has provided us with this wonderful Coca plant.”

One of the main scholars of the use and properties of coca is Mantegazza. According to this professor, “the most temperate ones consume from half an ounce to an ounce per day, divided into two servings, with which they prepare for morning work and night rest. However, he is not a vicious Indian who also consumes two, three and four ounces a day ”.

What is the coca leaf?

The coca leaf is a plant native to South America, especially in the subtropical regions of the Andes mountain range.

The scientific name of this plant is ‘Erythoroxilium coca’. It measures approximately 2.5 meters in height. It has white flowers and ovoid leaves.

There are records of the use of this leaf in pre-Inca cultures up to 8 thousand years before our era. The Incas used it for its anesthetic properties that stabilize fatigue and stress.

The coca leaves and the Incas

The Incas inherited the consumption of the coca leaves by the cultures that already cultivated and consumed this plant.

For the Incas, the coca leaves was sacred. However, it could only be consumed by the Inca nobility.

The only exceptions were the chasquis (people who ran through the mountains transmitting the message of the Incas), the children who would be sacrificed in the ritual of the capacocha or in exceptional cases of famine in the population.

After the fall of the Inca empire, the population took over the consumption of coca leaf. The Spanish considered it a diabolical plant but its consumption could not disappear.

Coca leaves continue to be chewed by the Aymara and Quechua cultures of Peru, Bolivia, and other Andean countries.

The Inca ceremonies of payments to the land included the use of coca leaf. These were offered to the land that supplied the world with different agricultural products.

Due to the sacred character of the coca leaf, it was held with reverence following a strict ritual that, in some cases, is still practiced today.

This ritual consisted of holding three coca leaves, joining them with two hands and offering them high up.

Then the leaves are blown as a sign of respect for the gods of nature such as the sun, the mountains, the lagoons, the earth, etc.

Only after performing this ceremony, the Incas proceeded to introduce the coca leaf to their mouths.

At all times, the person shows a solmene attitude and respect for this sacred ceremony.

The coca leaf in Cusco today

In Cusco, peasants, miners, ranchers and other people consume coca leaves. This helps them reduce the feeling of tiredness and hunger. In addition to providing them with strength and endurance; helping them endure long hours of heavy work.

However, of the total coca leaf production, the majority is destined to the manufacture of cocaine. Peru is one of the world’s leading cocaine exporters.

During the mystical tourism tours of Cusco, the coca leaf is used. For example, in the Inca ceremonies of payment to the land or ayahuasca this plant is usually used.

During the trekking routes to Machu Picchu, coca leaves are used to reduce the symptoms of altitude sickness or fatigue. The most popular routes are the Inca Trail and the Salkantay Trek.

How is the coca leaf chewed?

You must put a portion of coca leaf and chew until they secrete all their nutrients. The leaf is retained in the mouth while chewing gently, trying not to crush them completely.

What are the benefits of coca leaves?

Next, we detail the health benefits of coca leaves infusion: