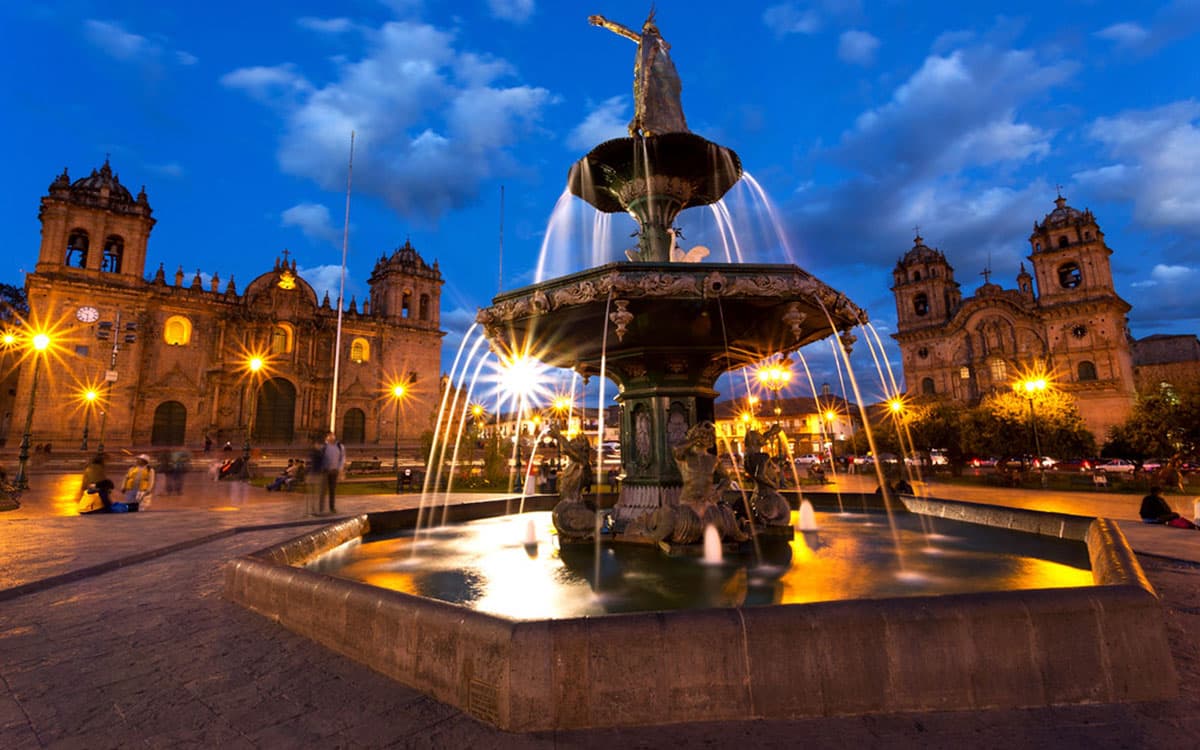 The city tour is a classic tour recommended to be done on the first day of arrival in the city of Cusco as it is a tour that does not require much effort since the places are visited in a vehicle and the walk to the points of interest are short.

The city tour is a classic tour recommended to be done on the first day of arrival in the city of Cusco as it is a tour that does not require much effort since the places are visited in a vehicle and the walk to the points of interest are short.

This is a tour with which we begin to discover the amazing culture of the Incas, as well as taking us through archaeological centers of high importance.

The places to visit are in the city of Cusco are the Cathedral and the Qoricancha and are recognized as the most important places in the city.

The archaeological centers that will be visited later belong to the Archaeological Park of Sacsayhuamán and are located outside the city and are larger and located at small distances from each other, so we will need transportation that will take us to these.

When visiting these, you will be able to appreciate the different Inca and pre-Inca construction styles that our city houses.

Why Choose this Hike to Machu Picchu?

14:15 p.m. we will move from the cathedral to the Qoricancha

16:15 p.m. We will visit the Qenqo Archaeological Center

17:00 p.m. We will visit the archaeological center of Tambomachay.

17:30 p.m. We will visit the archaeological center of Pucapucara.

We begin the tour starting with the pick-up from your hotel between 1:15 pm and 1:30 pm. You will have a guided tour of the center of the city of Cusco, you will visit the Plaza de Armas, the cathedral for an average of 40 minutes we will know the churches of the triumph one of the oldest in Cusco, the Cathedral of the city of Cusco and the most important in the city, and the church of the Sagrada familia, after our visit we will continue walking from the parade ground along Intikikllu street where we will also have an explanation of the streets through which we will pass, to continue towards the «Qoricancha» or Temple of the Sun where we will have the visit with our guide who will give details of the pre-Inca and Inca constructions and the colonial constructions for an average of 40 minutes and then continue in our mobility and go to the surroundings of the city and visit the archaeological centers of Sacsayhuamán known as the fortress and as a very important place for being the site of the Inti Raymi or festival of the sun on June 24 of each year, Qenqo or Labyrinth  is a place of worship to the Pachamama, Pucapucara or Red Fort is a place of military shelter from entering the city of Cusco and Tambomachay or place of Rest in which is the source of water or source of purification of entry to the city, the 4 Wakas of Cusco, at the end of the visit in these places with our guide we will return to the city between 6:00 and 6:30 pm.

DESCRIPTION OF THE PLACES WE WILL VISIT:

The Cathedral Basilica of the Virgin of the Assumption, a construction of more than 550 years old and located in the Plaza de Armas of Cusco. It was built specifically in the year 1560 on the Inca palace «Viracocha». This is the most important architectural monument in the city of Cusco.

Its structure is impressive and its old facade. But its greatest treasures are located within it, when you enter you can enjoy more than 300 paintings from the Cusqueña School, and works in embossed silver and carved wood, a place which will be worthy of admiration.

The Cathedral of Cusco has a rectangular plan of the basilica type with three naves: nave of the epistle, nave of the gospel and the central nave, coinciding with the three doors on the facade. It has fourteen cruciform pillars that define the distribution of the twenty-four rib vaults, the largest being the entrance vault and that of the transept. The 24 vaults are supported by basic structures made up of 21 stone arches and 32 semi-circular arches. All these structures are made of andesite stone. It is connected by the transept vaults through which it is connected to the temples of triunfo and of the Sagrada Familia. Those forming the cathedral complex.

The Qoricancha or Convent of Santo Domingo de Guzmán.

Qoricancha, the maximum expression of Inca architecture and engineering. Qoricancha Quechua word (language of the Incas) which means a place surrounded by Gold and which has been named by numerous chroniclers and historians for the importance that this place had in pre-Hispanic times, is also currently the Convent of Santo Domingo de Guzmán. In this place you can tell many stories and a lot of information since it was a very important place from the pre – Inca and Inca times and also in the colonial era because it was located in the middle of the city of Cusco. Several chroniclers mention that this place was fenced in gold or laminated in gold, its floors, its walls and even had a garden with gold animals in real size, they also mention that this was an important place since it also housed Sub temples of religious deities like the moon, the stars, the rainbow and the lightning. They also mention that the gold brought to Cajamarca was probably transferred from this place. Being sacked already upon the arrival of the Spanish in Cusco and after this the Temple of Santo Domingo de Guzmán was built.

The impressive archaeological center of Sacsayhuamán strategically built on a hill from where you can see all of Cusco. Its name comes from the Quechua language which means satisfied hawk or marbled head and is located 2 kilometers from the city of Cusco. It is famous for its enormous large carved stones, some of which are 9 meters or 30 feet high and weigh more than 350 tons approximately, in addition to being the place where the staging of the «Inti Raymi» or festival of the Sol which is the most important ceremony in the city.

This archaeological center has a design that resembles a head and is one of the most important places for being the head of the design of the city of Cusco which forms a crouching cougar. The type of construction that it had reveals that in its construction it had to have an enormous amount of labor, which some historians mention that they had more than 20,000 men working in the construction of it.

Currently you can see only 20% of the construction that this had since the arrival of the Spanish lithic material in the sector was reused in the construction of temples and homes in the city of Cusco.

Qenqo is an archaeological center located four kilometers northeast of the city of Cusco, its name in Quechua means labyrinth, probably due to the zigzag constructions and those carved into the zigzag bedrock of the water channels that it has, it has the archaeological groups of Qenqo Grande and Qenqo Chico, being the first the most important and standing out for having constructions made of bedrock as well as being known for the beautiful work done in this sector for ceremonies to the “Pachamama” or Mother Earth.

Some historians indicate that this was an amphitheater of cults where the Inca dead were placed for ceremonies, the dead were laid on the trapezoid structures that are there to worship, as well as some historians mention that in the underground galleries there is a hewn rock on which sacrifices were made or was also used to embalm corpses.

Pucapucara is a military construction located near Cusco, it is also known as the red fortress (of the Quechua language) since the stones with which it was built have turned this color due to its high levels of iron. This fortress is made up of large walls, terraces and stairways and was part of the defensive complex of Cusco in particular and of the Inca Empire in general. In addition, this sector is known as a crossing point to the city of Cusco as well as being indicated as the place where visitors to our city left offerings or paid a tribute to enter the city.

Tambomachay is a religious construction of water worship, its name means Rest place, it is located 7 kilometers from the city of Cusco. This archaeological center has a series of aqueducts and water channels as well as Pacchas or waterfalls that run through the rocks of this place, we have the main and most important waterfall in the sector which has two main waterfalls and the same with the same flow of water in these.

It also highlights the terraces that it has on these which have trapezoidal niches where the Mallquis or mummies or the objects to carry out the water worship ceremonies or the different tools that were used to perform these ceremonies were possibly placed.

What to bring to the tour?

For this tour we recommend bringing light clothing for walking and comfortable shoes, sunscreen, water, money in soles (to shop), camera – camcorder – batteries, rain poncho and sunscreen will also be important since the weather in Cusco varies very fast.

What is the difference between the city tour in shared and private service?

The City Tour in the shared service includes transportation and a guide for a group of diverse people (up to 19 people). In the case of the private service, it is a special service for a closed group from 2 visitors who can follow a different itinerary or according to the pace that people have on the tour.

What is altitude sickness?

Known as soroche or altitude sickness, this is a problem with altitude or acclimatization with the city located at a very high sea level as the city of Cusco.

How to avoid altitude sickness?

The recommended natural remedy is the Coca Leaf that can be consumed resting in hot water, which is recommended to take upon arrival at the hotel in Cusco to improve acclimatization. In addition to this we recommend drinking plenty of water. Being at rest or not doing very demanding activities.

If all this did not work, it is best to rest and let the body get used to it.

If you want to prevent you could also take the medicine that is well known for altitude sickness which is Soroche Pills which helps a lot with acclimatization (you can consult your doctor).