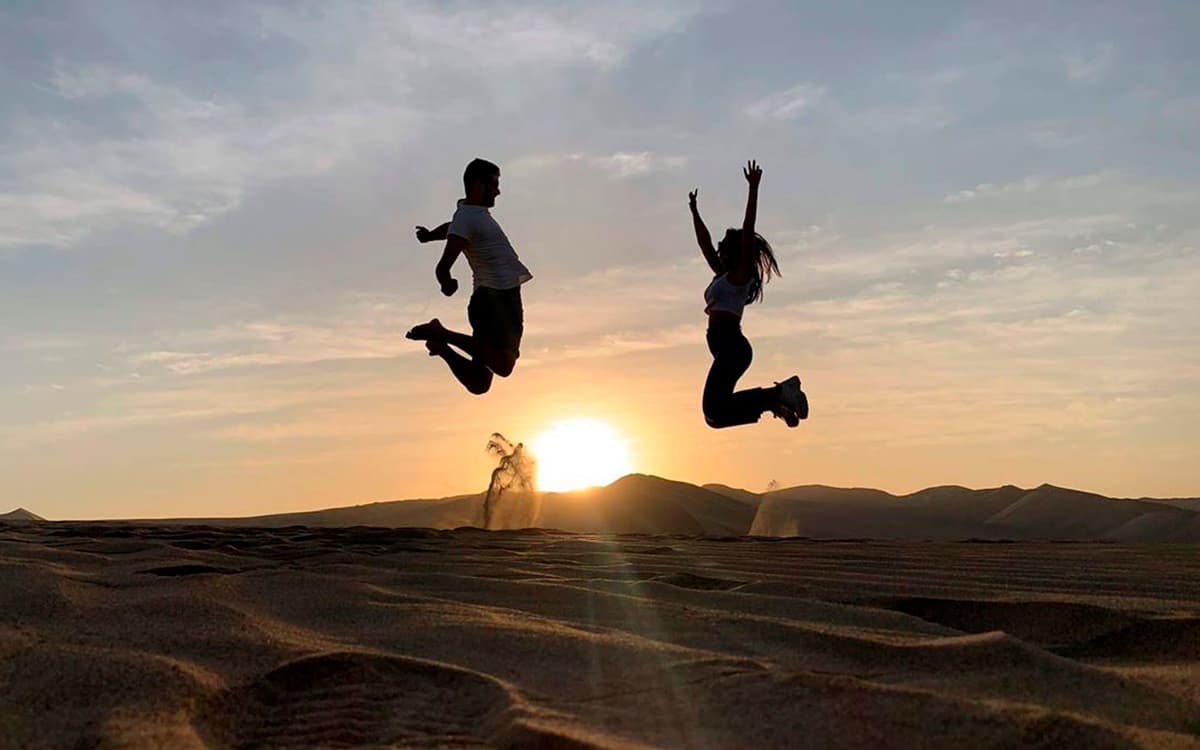 Its waters are due to the union of five branches that are derived from an underground river that passes nearby but in recent years it has lost capacity, and now its waters are artificial. In the past they were attributed curative properties, as they were rich in sulfurous and saline substances, and in 1960 one of the most exclusive spas in the country was built (nowadays it is not recommended to bathe in its waters). Around it there were restaurants, hotels and a beautiful boardwalk in which to rest surrounded by a fascinating landscape.

The emerald green waters are surrounded by palm trees, eucalyptus and huarangos, a type of carob tree that serves as a refuge for migratory birds. In addition to eating, having a drink and spending the night in the palm grove, the high dunes provide endless options for practicing adventure sports, especially sanboarding and buggies, making it a place that should be heavenly. now it has become a very tourist destination. Even so, it still retains its beauty and appeal, and the sunset in Huacachina is simply incredible.

Ica is located 300 km from Lima and the Huacachina Desert 5 km or 10 minutes by car. The access route from Lima to Ica goes by buses that leave the station every ten minutes, and it takes just four hours to arrive on the Panamericana Sur highway. By car the route can be done in less time, taking advantage of the good condition of the road. A 4 × 4 truck will allow you to better face the sand challenges of the area.

The area where the lagoon is located is totally desert. The only existing vegetation is the one that surrounds the lagoon, for this reason it is called the Oasis of America because it is the only place with these exact characteristics.

The Huacachina Oasis in Perú has emerald green waters. Some studies have discovered that it arose due to the outcrop of underground currents and around it an abundant vegetation composed of palm trees, eucalyptus trees and the typical guarangos has appeared, which serve for the rest of the migratory birds that pass through this region. All this contributes to making Huacachina one of the most colorful and beautiful places on the Peruvian coast.

It is the main pride of the city of Ica, its high dunes have always challenged visitors and residents, who have established as a typical activity of the place sliding on them on pieces of wood, surfboards and even water skis. The visitor can camp, practice board on sand or sandboard, rent tubular carts for dunes, go trekking along the lagoon and there are people who take a dip in its waters.

According to the Huacachina legend, this lagoon originated from the existence of an Inca princess named Huacca-China (the one who makes people cry) who was characterized by having a song that caused those who listened to cry.

Near this place lived a young Inca princess. That was known to all as Huacca China (the one that makes people cry). She was a princess with green eyes, golden hair and who sang in an extraordinary way to the point that everyone who heard her melody cried, because she had a secret and that is that her heart fell in love with a happy man.

The princess looked for a corner where she could cry and when she was free, she dug a hole before the tree where she could sink the sweet name of her love. Once in the hole she had made in the sand, before the carob tree, she filled herself with warm water and submerged her white nakedness.

When she came out of the bathroom, she wrapped herself in the sheet and when she saw herself in the mirror, she discovered a spy, a hunter, who, upon seeing her beauty, fell in love with her charms, coming like a satyr towards her.

The princess fled obstinately followed by the hunter among the dunes and heaths in which she was leaving torn pieces of her cloak, which at times revealed her nakedness. The sheet was entangled in a thrush and the princess was left desolate without noticing anything. Then the open savannah became sandy.

The princess continued to flee with her mirror up, when she wanted to jump she stumbled and from her fist lacking strength, the mirror escaped. And a commotion occurred, because the broken mirror became a lagoon and the princess was transformed into a mermaid who on moonlit nights comes out to sing her old song.

The Weather in Huacachina is always very sunny and warm during the day, averaging 25 degrees. February and March are the hottest months. You will only feel the difference in the weather at night: during winter, the night temperature can drop as low as 14 degrees.

The best time to go

The Weather in Huacachina is warm, it has sunny days and cold nights most of the year. Many visitors come to travel the dunes on sandboard and buggies. Between January and April it is particularly hot, with cold nights. The Mermaid Festival (February) celebrates the local legend of the mermaid.

The Huacachina Desert is located in the Ica region, a few minutes from the city of the same name. It is an attraction that is found in the middle of the coastal desert, an oasis that presents a greenish colored lagoon whose origin, it is believed, is caused by the outcrop of underground waters that ended up giving life to the beautiful vegetation that surrounds it.

The history of Huacachina Oasis in Perú as a favorite tourist spot for those who visit Ica, and love the charm of the waters in the middle of the desert, dates back to the 40s, where it became popular. It is in this year where the surroundings of Huacachina are set in such a way that until now there is no missing tourist service in the place. In those early years the attraction was limited to the spa, but nowadays the desert that surrounds the lagoon is also an attraction on its own and that calls for adventure sports lovers so that they can practice sandboarding or motocross.

Those who want to know the beauty of the landscape and enjoy it to the fullest are recommended to make their trip in the summer season where it shows all its greenery and splendor, although in itself, at all times of the year, the surroundings present a interesting coloring. Also keep in mind that the busiest period of the place is between the months of February to March when the Ica harvest takes place, a time when you will have to make reservations before these dates to be able to live and participate in this festival of the region.

What to do in Huacachina

This small town is home to less than 1,000 local people, but every day a new influx of backpackers comes to do one of the must-do activities in Peru … Sliding down the famous dunes of Huacachina! Local guides take backpackers on a tour of these dunes in incredibly powerful (and safe!) Sandboxes of dunes, flying over large humps in what appears to be an endless desert. This in itself is impressive, but it gets even better when tourists have the option to slide down some of these massive dunes! This can be exciting as well as chilling and you will often end up with a face full of sand, but it’s nothing a quick shower can’t fix! Snowboarding is world famous, but sandboarding is harder, faster, and a lot cheaper… a must do for anyone visiting Huacachina Desert.

Besides Huacachina Oasis in Perú is also famous for its Pisco and its vineyards. Pisco is the national drink of Peru, and Ica is often called the home of Pisco. We take you on a visit to the Pisco vineyards where you will discover the history of Pisco, see how it is made, as well as try some samples of this delicious refreshing drink. Peruvians are very proud of their Pisco and you just can’t come to Ica and not have a few glasses of Pisco!

What you must see in Huacachina

How to get to Huacachina Oasis in Perú?

From Lima to Ica, the bus trip takes between 4 to 5 hours and the ticket costs approximately 40 soles. Once in Ica, the journey to Huacachina takes 10 minutes by taxi. Drivers at the bus terminal will charge you around 10 soles.

You will not need more mobility once you have arrived. The city of Huacachina is small and visitors can walk from one end to the other in a few minutes.