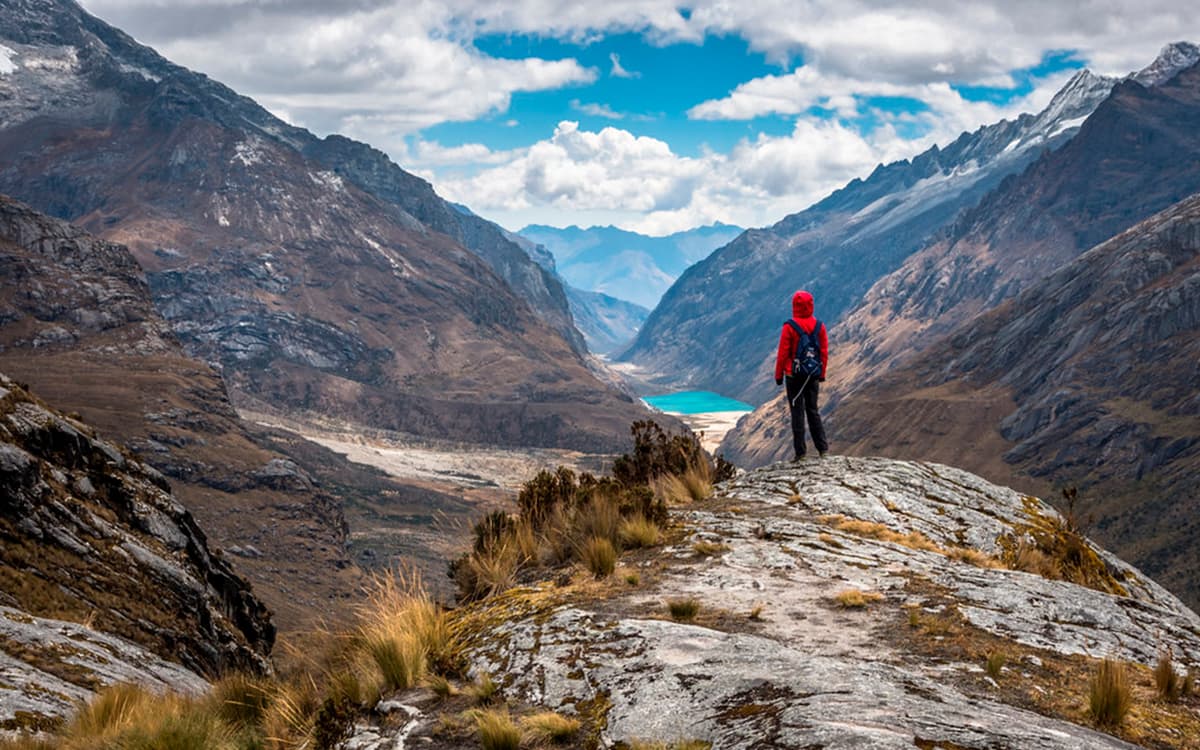 Far from the noise of the city, behind the mountains, we find this corner detached from the sky, with green fields and an emerald roof with cotton clouds; Huaraz, the peaceful city of shy sun

Huaraz has the titles of THE VERY GENEROSA CITY OF HUARAZ, for its sacrificial and determined support for the cause of the Independence of America (1824).

It is also known as the CAPITAL OF INTERNATIONAL FRIENDSHIP, after the earthquake of May 31, 1970, which totally destroyed the colonial city, causing more than 10 thousand deaths. This last title was obtained by concentrating the support of the whole world, which turned into a gesture of solidarity rarely seen, with help for the survivors of the earthquake.

Today the city is projected in a sustained commercial and tourist development, since it concentrates the highest percentage of the tourist infrastructure in the area.

Huaraz in its urban area has five (5) neighborhoods integrated into two districts: Soledad, Belén, San Francisco, Huarupampa and Centenario and expansion areas such as Los Olivos, Pedregal, Nicrupampa, Shancayán and Vichay, it is a modern city with streets and wide avenues, squares and parks that give it the appearance of a modern and comfortable city.

From all points of the city you can see the Cordillera Blanca with its imposing tropical snow-capped mountains.

The Weather in Huaraz is dry and temperate, semi-tropical climate.

The annual temperature ranges from a maximum of 24 ° C (75 ° F) to 7 ° C (44 ° F), and the climate in Huaraz has two well-defined seasons. Temperate and dry from May to September, its climate is called “Andean Summer”, the climate is pleasant at this time of year, with bright sunny days and cold nights. The rainy season occurs between the months of October to April, the sun shines in the mornings and rains in the afternoons, it receives between 500 to 1000 m.m of annual rain.

What clothes to wear?

Taking into account that the climate of Huaraz is very varied throughout the year, it is advisable to wear light clothing for tours, since it is quite hot at noon, but at the beginning of the afternoon the temperature drops and it is necessary to have a jacket or jacket. coat. If the visit is in the rainy season, it is necessary to bring jackets, raincoats or umbrellas.

To prevent altitude sickness in Huaraz it is advisable to have Coramina pills against soroche, drink coca tea when arriving in the city, do not eat indigestible foods, avoid excess alcoholic beverages. Drink plenty of fluids.

Tourism in Huaraz and the Callejón de Huaylas

The landscape of the Cordillera Blanca is full of mountains with snowy peaks and glaciers, with more than 35 peaks that exceed 6 thousand meters in height, Huascarán reaches 6,746 meters above sea level, lagoons of turquoise blue waters at the foot of the snow-capped mountains, and little further down near the Santa river Andean villages and towns of farmers and shepherds that make this place a unique destination in Peru.

This territory was the cradle of great ancient civilizations, highlighting the Chavín culture (1500 BC – 300 BC) who bequeathed us the Temple of Chavín de Huántar, today Cultural Heritage of Humanity.

The best point to start the visit to this area is the city of Huaraz, located in the center of the Callejón de Huaylas, has the best hotel infrastructure in the area and it is from here that many of the expeditions to conquer its snowy peaks and peaks.

The Huascarán National Park, a protected natural area, for its scenic beauty and its great Andean biodiversity is a Natural Heritage of Humanity.

For lovers of mountain sports and for extreme experiences, the Cordillera Blanca and the Cordillera de Huayhuash are some of the best destinations in the world. Mountaineering, trekking, mountain biking, canoeing, hang gliding, paragliding are the main sports practiced in these mountain ranges.

The traditional way to get to Huaraz is by bus from the city of Lima.

The Cordillera Blanca is the scene of impressive trekking routes in Huaraz Perú, and within the Huascarán National Park you can find many routes that vary from easy to difficult. Note that even easy trekking routes in Huaraz Perú can be challenging due to the high altitude, the city of Huaraz has an elevation of 3,052m. If you are coming from sea level, it is recommended that you take a few days to acclimatize and then start with the easier hikes.

Laguna 69 in Huaraz is one of the main reasons people visit Huaraz, with its sparkling blue waters that sits in front of the snowy Pico de Pisco. The best way to get to the Laguna 69 in Huaraz is by taking a tour, which will stop at the turquoise glacial lake of Chinancocha along the way. You will hike from 3,800m to 4,600m, which can be quite challenging for those who are not used to high altitudes. Tours tend to start early at 4 a.m., allowing plenty of time for ascent and descent.

This hike is recommended for those who get used to the altitude, as it is relatively easy and only takes half a day (approximately five hours), reaching 3,725 m. You can take a colectivo (shared taxi) to Chiwipampa, which is where the trail begins. While the lake is not as spectacular as many others in the area, the scenery is magnificent and you really feel rural life in Peru!

This four or five day hike is for the hike addicts who need their fix, the hike is 48 kilometers in total and ascends to a height of 4,765m at the Portachuelo pass. You can do this hike with a guide or on your own, starting the hike by taking a bus to Yungay, then to Vaqueria, which takes around two hours as you wind through steep, winding roads. If you start in Vaqueria (3,700m) instead of Cashapampa (2,900m), you will go down on the first day, instead of uphill on your last day.

Get on a bus around 7 a.m. to Llupa or Pitec, which will take you directly to the end of the walk. From here the path leads upwards, but take it easy as the altitude is challenging. You’ll have great views over the valley and eventually hit a waterfall and stream, where the fun really begins! There is a steel cable to climb the rocks and once you have it, you are close to the stunning blue waters of the Lagoon at 4,450m.

Located in the southern part of the Cordillera Blanca and another day’s trip from Huaraz, a tour is recommended as the glacier is 70 km away. On the way you can visit Laguna Patococha and you will see the plants of Puya Raimondi, also known as the Queen of the Andes. It is the largest species of bromeliad and recognizable due to its height and beak! It is advisable to drink mate (coca tea) to help with altitude sickness, since the glacier reaches 5,240 m.

Taking 10-14 days, this is not for the faint of heart! The altitude ranges from 2,750 to 5,000 m, starting in Matacancha and ending in Llamac. It is one of the most beautiful and impressive hikes in the Cordillera, winding through the Yerupajé Mountains, the second highest in the Peruvian Andes, and passing crystalline lakes, trickling streams, and towns that function in a world of their own.

How to get from Lima to Huaraz?

You can get from Lima to Huaraz by two ways: Air and land.

By air: There is a daily flight from Lima’s Jorge Chavéz International Airport to Anta Airport, which lasts 60 minutes; Anta is located 15 minutes north of the city of Huaraz by car. By the way, from Anta to Huaraz there are many vehicles that provide transportation service. These flights are offered by the LC Peru Air Company.

The land means: the most used service from Lima to Huaraz, because many buses arrive in the city of Huaraz that leave from Lima, Trujillo, Chimbote, Chiclayo and other cities in Peru. Most of these buses provide an excellent service (you just have to know how to choose well), they provide TV service with DVD, toilet services, reclining seats, air conditioning, normal seats, semi-bed, bus bed, etc. The cost of these services vary according to quality.