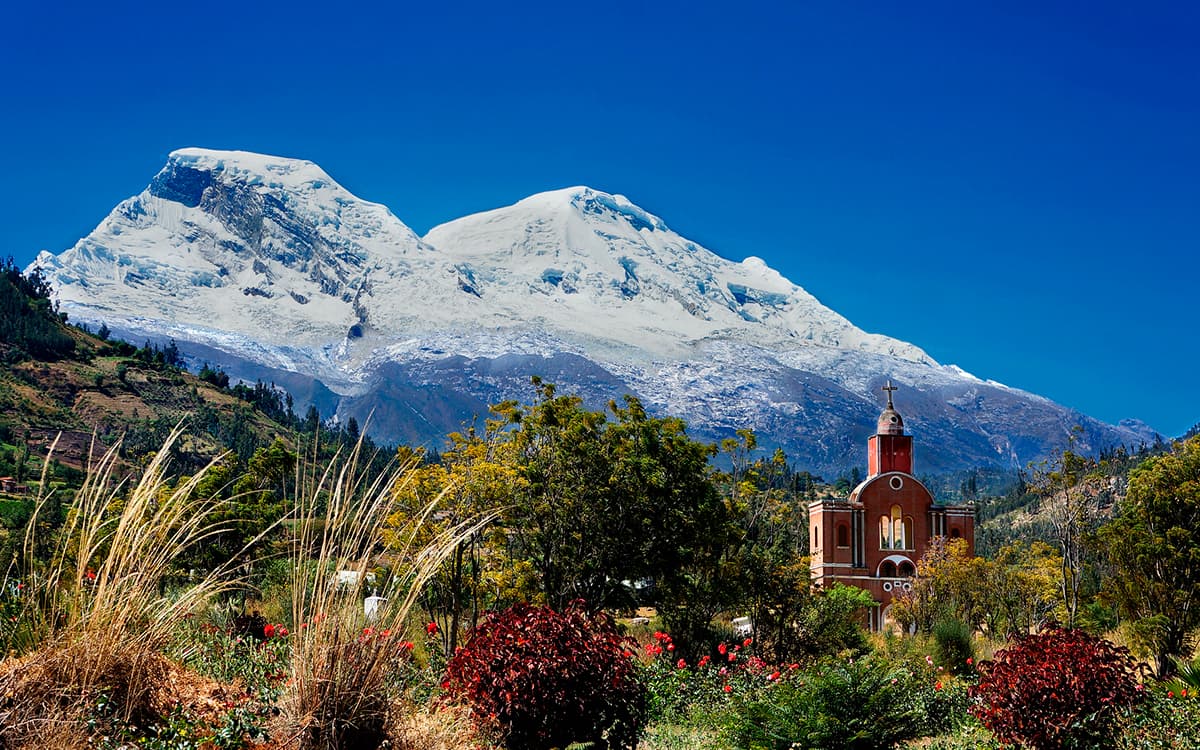 Awesome. There is no other word. A paradise surrounded by imposing glaciers that bathe the mountain range and are the origin of mighty rivers; with a flora and fauna of hundreds of species; and with 33 archaeological sites to connect with history, in addition to communing with nature.

Here grows the Puya de Raimondi, a plant of up to 12 meters. Here lie the purest turquoise lagoons that one can imagine. Here one thinks: paradise exists.

Within the park area there are numerous native communities, which are also under protection and seek to improve the standard of living of its inhabitants. The Callejón de Huaylas contains numerous towns and is an area intensively used for agriculture, grazing, mining, and forest plantations. The park is uninhabited, although there are some grazing areas in the lowlands for native cattle (llamas, alpacas and vicuñas) under an agreement with the local population.

This region has been for centuries a place for the settlement of ethnic groups, as evidenced by the ruins at Gekosh and Chuchumpunta and at Willcahuain – Huyllap – Pumacayan, Hechkap Jonkapampa and others. These represent the largest collection of archaeological remains that allow us to know those ancestral civilizations. The oldest cultures seem to have developed in the northern part of the park, such as the remains of the Cueva de Guitarreros in Yungay that date back 2,000 years before the Chavín culture, in the area from Carhuaz to Pomabamba.

The park includes a diversity of geomorphological features. Through the deep ravines and chasms where torrents of water formed from one of the 80 glaciers run, there are about 120 lakes of glacial origin that vary in size from 1 million m³ up to 10 million m³ of water. Further down there are hot springs whose waters are used for their therapeutic properties. There is still seismic activity in the area, which was affected by an earthquake in 1970. The wide range of ecological floors has resulted in a wide variety of vegetation types. The vegetation is characteristic of the humid mountain forest in the valleys, Andean fluvial, tundra, and very humid sub-Andean, paramo formations in the upper levels. The distinctive Andean bromeliad is abundant. Other plants include bromeliads, mountain orchids, and relict forests.

Huascarán is the snow-capped mountain with the highest peak in the Andean mountain range of Peru, reaching a height of 6,746 meters above sea level. (22,132 feet).

It is located in the Cordillera Blanca, department of Ancash. It covers some parts of the provinces of Recuay, Huaraz, Carhuaz, Yungay, Huaylas, Pomabamba, Mariscal Luzuriaga, Huari, Corongo, Sihuas and Bolognesi. Its area is 340,000 hectares.

The average temperature of the year is 3 ° C, the minimum is 30 ° C. The average rainfall in the year is approximately 884 mm (generally from October to May).

The animals in Huascarán National Park is represented by more than 120 species of birds and 10 of mammals. Among the most outstanding birds, the Andean condor (Vultur gryphus), the torrent duck (Merganetta armata) and the puna partridge (Tinamotis pentlandii) stand out.

Mammals include the wild cat (Oncifelis colocolo), the Andean cat (Oreailurus jacobita), the spectacled bear (Tremarctos ornatus), the taruca (Hippocamelus antisensis), a ruminant with large horns larger than the deer, and the vicuña (Vicugna vicugna).

The Huascarán National Park presents a wide spectrum of microclimates, which causes a mosaic of different types of vegetation that is closely linked to each other. 779 species of high Andean flora have been identified, distributed in 340 genera and 104 families.

In this floristic diversity, the Bromeliad family is represented by the Raymondi puja (Puya raimondii), a species that has the largest inflorescence in the world and is one of the park’s conservation objects. There are also relict forests and numerous species of grasses that make up the puna pajonal.

In the Huascarán National Park you can see Raymondi puya stands located mainly in the Carpa and Queshque streams. Relict forests of quisuar (Buddleja coriacea) and queñua (Polylepis sp) are also conserved, which are located mainly north of the Llanganuco sector. There are also high Andean meadows, puna grass and various oconales (wetlands), located mainly above 4,500 meters of altitude.

In the scope of the Huascarán National Park, 33 archaeological sites have been identified that show rock art, andenería systems, roads, cultivation terraces, tombs, viewpoints, fortifications, irrigation channels, and others.

Much of this cultural wealth is located in the different streams and valleys at the foot of the mountain. The most representative archaeological remains are those of Auquispuquio, Cullicocha, Queshquepachan, Paccharuri, Quilcayhuanca, Nuevo Tambo, Cayesh and Pachacoto.

They are two beautiful glacial lagoons located 25 km northeast of Yungay, between the Huascarán snow – the highest in Peru – and the Huandoy. From here starts a pedestrian path (María Josefa) that crosses a dense forest of queñuales through which runs a stream of crystalline waters that is ideal for observing birds and wild flora.

It is located 5 km from Huari in the Conchucos region. It is a 3 km long mirror of water surrounded by mountains and eucalyptus forests.

They are located in the Carpa and Queshque streams to the south of the Huascarán National Park. They are accessed through an affirmed path that leads to the Pastoruri glacier. On the route you can visit the gasified waters of Pumapampa. Likewise, you can participate in the rural community tourism activities of the Campesino Community of Cátac.

It is located 20 km northeast of Recuay on the road to Chavín. It is located at the foot of the Yanamarey and Pucaraju mountains. It is the ideal destination to spend a morning boating.

It is located 34 km east of Caraz. It has an excellent view of the snowy Artesonraju.

It is called «Laguna 69» because, when the authorities counted the small and large lakes in the region, it was given that number. It is considered as a Biosphere Reserve by UNESCO, in addition to being a Natural Heritage of Humanity. Its waters are fed by the impressive Chacraraju snow-capped mountain, only in the thaw season.

One of its most outstanding characteristics is the brilliant color of its waters, of an intense turquoise tone, and crystalline due to its purity and the absence of contamination in the area. However, the lagoon has a very cold temperature, so we do not recommend taking a long dip once you get to know it.

In the Huascarán National Park you can practice mountain biking, skiing, climbing, adventure walks and an experiential tourism that allows you to know this fascinating place, the scene of the development of part of our culture.

The entrance fee to Huascarán National Park varies according to the origin of the visitor (foreign, national or local) and the duration of their stay inside the park.

All entrance fee to Huascarán National Park are expressed in the national currency of Peru, the Sol.

The following must be taken into account for this entrance fee to Huascarán National Park: