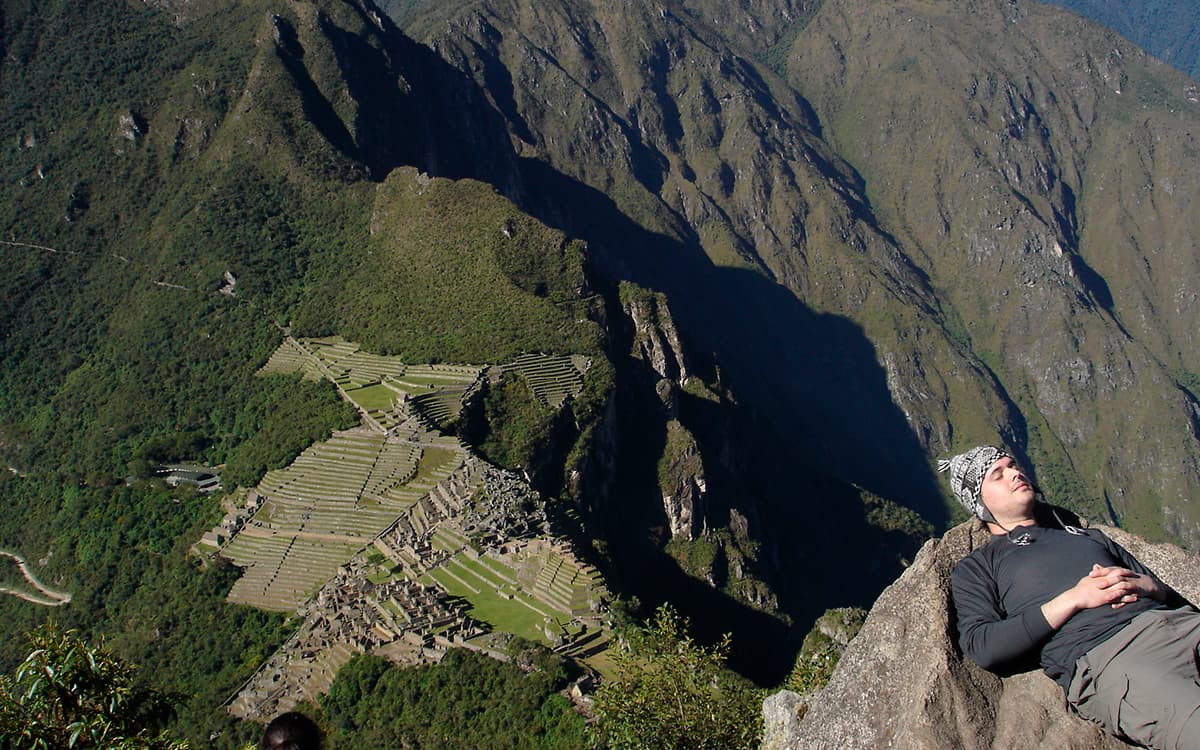 Located north of the citadel of Machu Picchu, Huayna Picchu or Wayna Picchu is none other than the huge mountain that appears behind the Inca citadel and that can usually be seen in the traditional panoramic photos of the Inca archaeological remains.

Huayna Picchu is the Quechua name that translates as “young mountain”, whose semicircular base is bathed by the waters of the Urubamba River and is located in front of Machupicchu.

Reaching the top of Huayna Picchu is a challenge. The journey to the top of the mountain is dangerous and exhausting, and takes about an hour. But once being up, the tourist will not regret it.

The path begins by entering an area with very dense vegetation and soon the climb begins. The path, quite narrow, is made up of a series of irregularly placed granite stone steps. There are some that seem carved out of the same rock that continues up the wall. If you walk slowly it may take about an hour.

The narrow and stony path brings hundreds of visitors a day to the archaeological site, coming from all over the world, who in different languages ​​speak of the wonderful view from the mountain.

It has an altitude of 2,667 meters above sea level and its top has an area of ​​2,000 m2. The Incas built a series of small terraces and some buildings on the top of Huayna Picchu. These buildings could be part of an astronomical observatory but they would also have served as a guardian point for the citadel because from this point you will be able to see all of Machu Picchu, Inti Punku and the roads that lead to the citadel.

It is specified that Huayna Picchu was used to build several complexes, such as the impressive Temple of the Moon built in a large natural cave, which is located at the back of the mountain.

On the other hand, there are indications that Huayna Picchu was placed for surveillance purposes, a communication station and a shrine.

Huayna Picchu is located north of the Inca city of Machu Picchu. To climb the mountain of Huayna Picchu, you must reach the checkpoint and enter Huayna Picchu and follow the path that begins a few meters from the Sacred Rock, it is an area with very dense vegetation, this path is very steep and quite narrow and includes flights of stairs and steps made of granite stone placed irregularly, there are some that appear carved in the same rock. The ascent lasts between 45 to 60 minutes depending on the physical condition of the person.

The altitude of Huayna Picchu is 2,720 meters above sea level.

Machu Picchu was a city built and inhabited by the Incas around the year 1450. Today only the remains of that city remain, they are the ruins of the hidden city of the Incas, as it is also called. To give you a more specific indication, the city and its surroundings constitute a single park, with a gate provided with turnstiles to check income and with a whole transport system to get there.

The citadel is surrounded by two mountains. The mountain of the same name as the city, therefore, Machu Picchu Mountain which according to the language of the Incas is the old mountain and Huayna Picchu is the young mountain. And you can climb to the top of both, access to them is within the park itself. In the following image you can have a better idea of ​​the location of the Inca city and its mountains.

According to history of Huayna Picchu, it is said that the Huayna Picchu mountain was used by the Incas as a center or position for sentinels who guarded the city of Machu Picchu. This as a result of them feeling threatened in their territory. The constructions made by the Incas in the Huayna mountain then must have been the way of the Incas to keep alert to any territorial attack that could arise.

The road to Wayna Picchu, as it is also written, starts from the north end of Machu Picchu. Then the road will divide and they will have to walk to the right side, where the climb to the top of this impressive mountain begins. With a path that requires physical effort, the view from this place will become wonderful for the traveler to be able to appreciate the citadel from almost 300 meters high.

Another of the constructions that you will observe on the tour is the “Inca’s Chair”, which is very similar to a throne. It can also be seen from the height of Huayna Picchu, the snowy Salcantay (consecrated by the Incas), important in the times of the Inca Pachacútec.

The majestic Temple of the Moon

It is an archaeological site, located at the back of Huayna Picchu, where you will find caves. Considered a ceremonial temple, the Temple of the Moon, is located 2,700 meters above sea level. It is built based on trapezoidal niches, and has delicate Inca-style finishes.

In the center of this small architectural complex, you can see a throne carved in rock, it is believed that inside this place there were niches for mummies.

Get organized and build your backpack

Tickets to climb the mountain can be purchased in advance at www.machupicchu.gob.pe. Only 400 people have access, in two shifts of 200.

If you do not need or do not want to climb the mountains to get to the city of Machu Picchu in the typical way, you can then go by train starting from Cusco and then by bus from the Aguas Calientes stop to the park gate. But if you wish, it is also possible to get there by the famous Inca street or the then called Salkantay, everything will depend on the degree of adventure you want to choose for your trip.

Ascent to the Mountain

The peak of Huayna Picchu is located at 2693 meters above sea level, which gives a rise of approximately 240 meters starting from the city of Machu Picchu (considering the altitude of the central square which is 2453 meters).

The peak of the Machu Picchu Mountain is located at 3,082 meters above sea level, a rise of 629 meters, considering the altitude of the central plaza of the Inca city. If you decide to climb the Huayna Picchu mountain, you can also enjoy the Inca ruins before the climb, the Temple of the Moon, and also get to enjoy the view from the top of the mountain. The Temple of the Moon and other nearby natural caves are located on the north face of the mountain and are lower, in altitude, than the starting point of the trail.

At the end of the classic inca trail 4 days 3 nights or the salkantay trek 4 days you will have the time to hike the Huayna Picchu Mountain.

The difficulty of ascent to the mountain is of the Moderate high type, because it is a steep mountain with precipices in many of the sections

The ascent to the mountain of Huayna Picchu is not recommended for people who suffer from vertigo or fear of heights due to the number of sections with precipices and large abysses that paralyze more than one. The park does not allow minor children or the elderly due to the danger of the route.

How to buy the Huayna Picchu Tickets?

To buy the Huayna Picchu Tickets it is necessary to reserve the tickets months in advance. Then you have to carry out the online purchase process. Payment is through Visa or MasterCard cards. Finally, you only have to print the tickets and present them on the day of the visit to the Waynapicchu mountain.

The spaces of the Huayna Picchu Tickets are limited and sell out quickly due to its high demand.