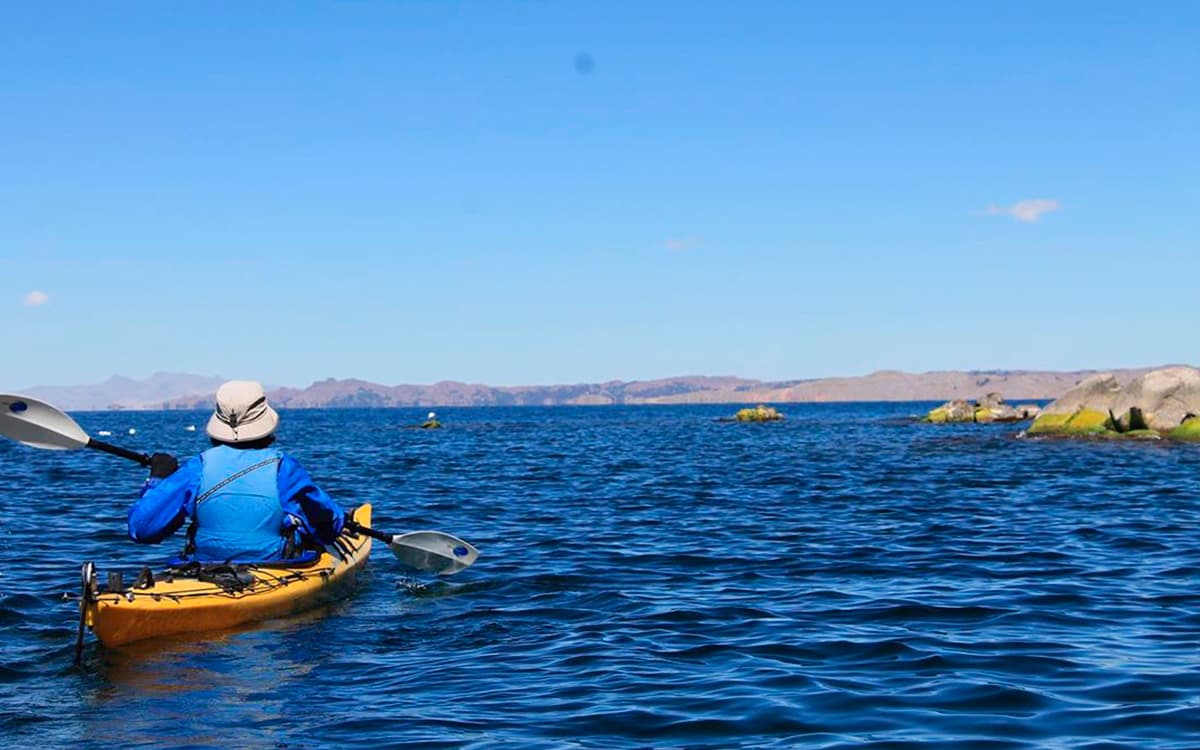 The highest navigable lake in the world is a spectacle wherever you look at it. Surrounded by dense vegetation where the reeds prevail, it is inhabited by various islands, and each one of them has a different story to tell.

Taquile, Amantaní, the floating islands of Uros, offer experiences where it is possible to live directly the tradition and customs of a people that has known how to rescue the best of its environment and coexist harmoniously with it.

It is the highest and most navigable in the world. It is located in the Altiplano del Collao, enclosed between the Western Cordilleras of the Andes that come from Chile and the Eastern one from Bolivia. It forms a closed basin. It is 3,812 meters above sea level, between the Republics of Peru and Bolivia.

Lake Titicaca is located to the south of Cusco about 387 km, in the Altiplano del Collao, in the south-east of Peru, in the Department of Puno and North-east of the Republic of Bolivia.

With an area of ​​8,300 square kilometers of surface, it is therefore the largest lake in South America. With depths up to 550 meters deep, at an average altitude of 3812 m s. n. m. between the territories of Peru and Bolivia. between the territories of Peru and Bolivia. It has an area of ​​8562 km², of which 56% (4772 km²) correspond to Peru and 44% (3790 km²) to Bolivia and 1125 km of coastline. It is estimated at 3 million years old and has an average depth of 107 meters. The water temperature is 13º on average and more than 25 rivers pour their waters into Lake Titicaca.

The shape of the lake is irregular, approaching a rather elongated ovoid. The Copacabana and Achacachi Peninsulas in Bolivia; They divide it into two parts that communicate with each other through the Strait of Tiquina. The part located to the Southwest, approximately six times smaller than the other, is called Lake Small Inferior or Uiñaymarca, and the one located to the Northwest, Lake Grande, Superior or Chucuito.

The lake has taken the name of one of its largest islands called Titicaca or del Sol, Inti or Aymartharu. The lake was also called by the natives Tartaptattacotta, which in Aymara means lake formed by the meeting of the waters, or lake of the cataclysm, according to the Puno philologist and historian Belisario Cano.

The water level of the lake fluctuates constantly according to the rainy or dry years of the region, varying its level, between 80 centimeters to one meter twenty.

At a depth of 25 meters it has a deep blue color, indigo comparable only to the French Riviera, when the sky is clear.

The temperature of its waters on its surface is 12 ° decreasing a bit as it deepens.

The lake is fed by more than 25 rivers.

Lake Titicaca is the highest navigable lake in the world, located in the Andean highlands in the central Andes. The altitude of Lake Titicaca is 3,812 meters above sea level.

11 Facts you did not know about Lake Titicaca

It is the highest navigable lake on the planet and the second largest in South America, but there are some facts of Lake Titicaca that will surprise you:

The Inca legend: One of many versions says that the apus (spirits of the mountains) were angry with men and women for disobedience. They inhabited a great valley, where Titicaca is now.

The Aymara versión: The Inca legend is confused with that of the Aymara, a people whose heirs, like the Uros, inhabit Titicaca

Caballitos de totora: The cattail is a plant that grows in wetlands and lagoons in the region. With them rafts have been built by hand.

Sun `s Island: Another myth tells that Manco Capac and Mama Ocllo were born here. The island, located on the Bolivian side, preserves terraces for agriculture and 80 archaeological ruins, among which is the Sacred Rock and a labyrinthine construction.

Island of the Moon: It is next to that of the Sun. Here the Palace of the Virgins of the Sun was built. There lived maidens candidates for future wives of the emperor.

Isle of Weavers: On Taquile Island, garments are made by hand or on pedal looms. In addition to the chullo, the calendar belt is famous, representing agricultural cycles and rituals.

Submerged city: During an expedition in 2000, a group of archaeologists discovered in the lake, 30 meters deep, the ruins of a temple the approximate size of two soccer fields.

Tiahuanaco: Everything is an enigma in this archaeological zone: the 175 heads embedded in a wall; the Puerta del Sol, on whose lintel appears the god of the staves, 48 ​​winged effigies and their solar alignment.

It is the highest navigable lake on the planet and the second largest in South America.

It is located three thousand 800 meters above sea level. It reaches a maximum depth of 284 meters. There are 41 islands in the lake.

Visiting Peru without visiting the Floating Islands in Lake Titicaca is to miss half of the essence of Peru. The islands bring you a little closer to the culture and people of the Uros region, and even more so if you spend a night in this mystical and great lake. Get ready for the height and the cool of the water.

Each of these fabulous islands is populated by a group of indigenous people who have a fairly ancient history and customs. Making this journey is a must when you are in the department of Puno.

This is a destination you must know whwen you visit Perú, along whith the rainbow mountain peru tour and the inca trail to machu picchu.

The Uro Tribe pre-dates the Inca civilization and has preserved most of its unique ways of living to this day. The indigenous group originally chose to live in the lake as a defensive tactic and considering themselves the owners of the lake and its waters. The inhabitants of the Floating Islands in Lake Titicaca also claim to have black blood and do not feel the cold.

The Floating Islands in Lake Titicaca are made of layers of dry reed reed that are interwoven so that they can really float. An island can last up to 30 years if kept in the right conditions. When the reeds at the bottom are rotted from the water, new layers of reed are added. The process of rebuilding the island requires constant maintenance and is one of the many daily tasks of the Uros.

The Totora, an aquatic plant that grows on the surface of Lake Titicaca, is an essential renewable resource for the life of the Uros, as it is their main construction material, it is usually woven, constituting the roofs, walls and doors of their homes. In addition to their homes, the Uros also make their main means of transportation within Lake Titicaca and between their own islands.

Another of the essential uses of the cattail is that when the stalks dry they can be used as firewood for their kitchens, thus making fuel. They also use this material to create beautiful totora handicrafts, which they sell to help their economy.

The houses and boats of the inhabitants of the Uros islands have built from the same cane using a technique similar to that of the islands. They also make handmade items that are sold to tourists visiting the floating islands of the Uros. Around almost every 6 months they have to lift and move their houses so that they can add another layer of reed to the floating island.

When the cattail is pulled to build, part of the root is eaten because it is a rich source of iodine. It is also used to relieve pain, make tea, and cure hangovers. Fishing and bird hunting are one of the main ways to obtain food on the Uros Islands. They also eat the guinea pigs and ducks that remain on the islands; the aquatic birds also stay on the island of the uros to help them fish or for their eggs.

On the Floating Islands in Lake Titicaca, there is a traditional school and a Christian school that are the main sources of education on the islands. As the children grow older and begin to seek a university, they are likely to leave the lake and head for the mainland to study in Puno. The Uros way of life is to marvel at but it is also extremely difficult and is constantly disappearing. Many are still living in the traditional way, Many are still living in the traditional way, carrying rods in their boats, rebuilding the islands, going to the lake to fish, but many of the young people are leaving the island a different life on the mainland. Daily life here depends mostly on the reeds that grow in the lake, which provides food, shelter, and transportation. It’s a life of hard work and long days in harsh weather. In recent years, tourism has become an important part of the Uro economy. People have opened their homes and welcomed tourists from all over the world. Its unique lifestyle and impressive Lake Titicaca make the floating islands something you have to visit when passing through Puno.