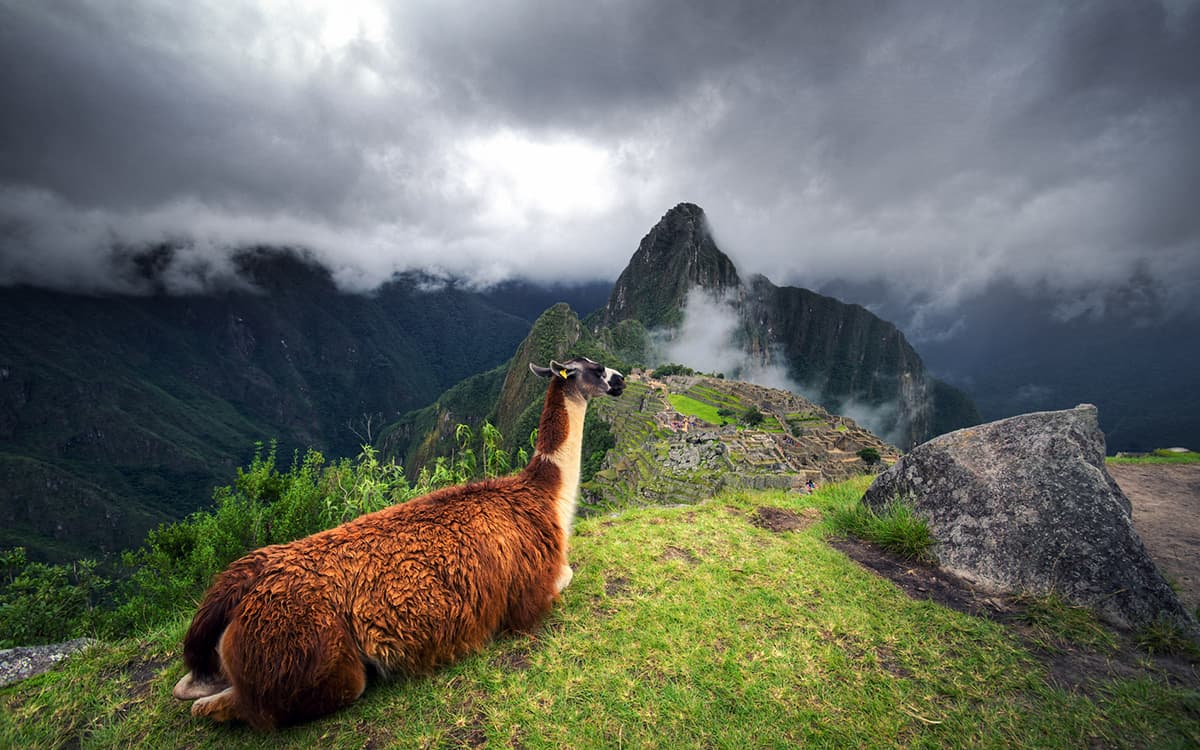 The llama is the largest camelid in South America. It is a domestic mammal that abounds in the highlands of the Andes.

At present, the llama is still used by the Andean inhabitants, with its wool they make coats and their excrement is used as fuel.

The llamas appeared in the first coat of arms of Peru in 1820, later replaced by the vicuña.

Where did the llamas live?

Llamas live mainly in the highlands of Argentina, although I can find in other countries such as Peru, Ecuador, Chile and Bolivia.

The habits of the llamas are considered diurnal and they are also of the group type, this means that they feed in the group day. As with cows, llamas ruminate, which means that they ferment food in the stomach, and then return it and chew it, however, they are not considered ruminants, since they have 3 chambers in their stomach instead of 4. The stomach makes it really difficult for them to digest flora, and they eliminate as much food as possible. With one chamber less than that of a sheep, the well-developed llama extracts about 20% more of the nutrients from the food itself.

The llamas in Perú are a creation of the Andean natives through artificial selection from wild guanaco that was domesticated. Its scientific name is Lama Glama.

Llamas in Perú were used by the Inca empire, it was used for sacrifices, wool and meat were obtained and it was also used as a pack animal, being able to carry up to 40 kg in a long section and up to 60 kg in a short one.

In Perú, you can find llamas in the inca trail to machu picchu and during the rainbow mountain peru tour.

The llama has a long neck and thick fur. She has a narrow face and round ears and a cleft upper lip. Her lower incisors stand out. Its legs have 2 toes with pads on the soles.

The llama, and its smaller cousin, the alpaca, and which are used mainly for their wool, are absolutely tamed animals, and are not found in nature. They are uniquely suited to life in the high-altitude cold of the Andes mountain range, which stretches through the South American nations of Peru, Argentina, Chile, Ecuador, and Bolivia.

Living in dispersed air, at altitudes of more than 4000 meters above sea level, your cultured blood contains oval-shaped particles and high amounts of red cells that allow for enhanced oxygen absorption. They have also made progress in lung capacity and strong hearts.

The llamas have soft padded skin, cleft feet, developed for the transit of rocky areas. They have 2 separate toes, with a long nail at the end of each, that leave a great drag on rocky surfaces, and they are strong and diligent climbers, using their long necks for balance.

Llamas have large eyes and excellent vision, developed for life in the mountains, where the sky is bright, and snow falls regularly. To assist and avoid glare and snow-blindness, her eyes are designed with unique built-in umbrellas, which resemble a curtain of ruffles hanging from the eyeball, and close like Venetian blinds when required.

Llamas ruminate, which means that they ferment food in the stomach, and then return it and chew it, however, they are not considered ruminants, since they have 3 chambers in their stomach instead of 4. The stomach allows them to digest flora really hard, and they remove as much food as possible. With one chamber less than that of a sheep, the well-developed llama extracts about 20% more of the nutrients from the food itself.

The flame shelter is made of strong, soft fibers and can be woven into a sturdy canvas used to make bags, coats, and blankets. Llama fiber is processed the same as sheep’s wool, by shearing the skin from year to year. A single llama can generate about 4 pounds of wool, which tends to be light weight and very hot.

Llamas coexist in a group of 20 individuals. The dominant male is aggressive towards others when defending his territory

If they feel threatened, it is very possible that they will spit or bite anyone who tries to approach their domain.

The male reaches sexual maturity at 3 years of life, while the female begins the first year. The male llama forms a group of 6 females one in area and does not allow other males to approach its territory.

Llamas are herbivorous, they normally consume bushes, whatever vegetation is in the mountains. They get water from the vegetables they eat but when they drink water they consume 2 to 3 liters. by sitting.

Being a ruminant, the digestion process takes longer since it has to go through its 3 stomachs.

At 3 years of age the llamas then begin to make changes in their eating habits, always having a grass-based diet regardless of whether they are soft or hard. There are llamas that inhabit the Andean highlands and they also feed on hard grass that is mostly ichu.

Llamas are considered to be animals with enough strength and incredible resistance that can go several days without having consumed anything. Consumption due to the need for water is low since they obtain it from practically most of the vegetables that they can consume.

The llama is a social, intelligent and expressive animal. Sometimes they just don’t care about the manner of expression. The fact that the llamas will spit is part of their lexicon.

Llamas live in herds, active and incessant to change, these animals are difficult and challenge each other for dominance and change, and spitting is one of the ways they show their contempt or superiority.

The best thing about llama saliva is that they provide many warnings, including chin raising, holding their ears, and giving a preliminary shaft that includes the frothy sound and a bit of saliva, and if it is not heeded they vote as a nasal green juice.

After they spit, they hang from their lower lip in an expression called “bitter mouth” as a reaction to the stomach acid that they just project.

Llamas do not usually spit frequently, and will usually spit if they have reason, especially in their psyches. Females spit particularly to show disinterest in a male who wishes to mate. This is such a common behavior that llama breeders use a “spit test” to determine whether or not a woman is pregnant. If you ignore it or show interest, it may need to be bred again, however, if you spit on it, it is more likely that it is already pregnant and no longer needs its mating services.

The dominant llamas will spit if the subordinates do not disappear at the time of the trough, they also spit throughout the fighting and in self-defense.

If a male llama is trying to establish dominance he will be spitting on his competition, inviting him to neck fight.

Importance of llamas for the Inca empire in Peru

Many people ask why are llamas important in Perú? Well, these silent and incredible creatures came to South America before man and made the Andean mountainous regions their place in the world.

On a day like today, some 10,000 years ago, man, a brand new inhabitant of these steep zigzagging lands, began to domesticate this docile and incredible animal that still continues to be a key part of the regional economy.

Archaeological monuments found in Peruvian lands give credit to this process that has several edges.

Surely, the high concentration of hemoglobin in the blood of this noble mammal, which is why the low oxygen in the heights does not affect its productivity, is one of the great reasons. Perhaps his perennial gentleness and closeness to man have also been of great help. Scientific rigor indicates that its three stomachs and its ruminal flora maximize the use of fiber and protein, so the harshness of the Andean terrain suits it well.

The truth is that not even those first settlers, much less the Incas, were going to miss out on the benefits of this pseudo-ruminant herbivore, almost 1.3 meters high up to its shoulder blades and almost 140 kilograms in weight. That translates into a lot of strength, a lot of wool and, also, a lot of meat.

So, why are llamas important in Perú? Today, llamas in Perú are generally used as beasts of burden, but in the past they were revered and even worshiped as a deity.

Only a few Inca sculptures in gold, silver and bronze escaped conquering greed and survive scattered in museums around the world.

However, this animal, which was so useful and admired by the Incas, continues its existence today throughout Peru, Chile, Bolivia, northern Argentina, Ecuador and Colombia.