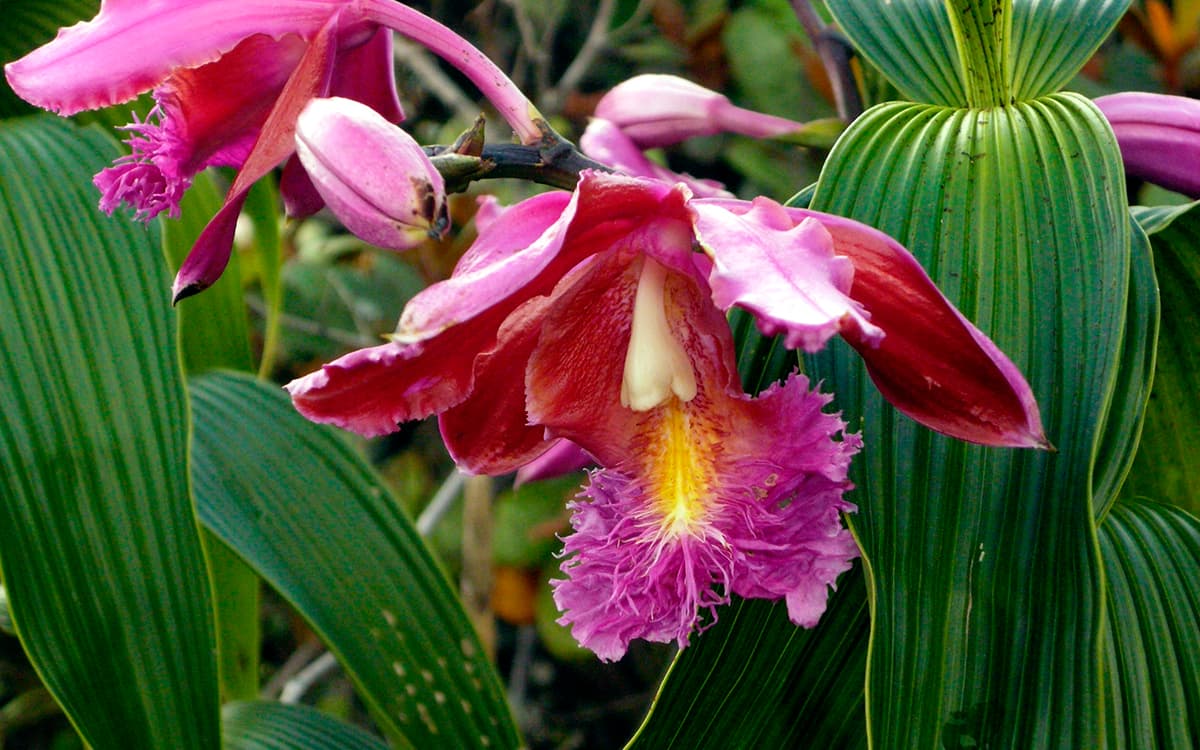 The Historic Sanctuary of Machu Picchu, is considered a privileged place of orchids, because it houses a high number of species, it is estimated approximately 300 species of orchids distributed in the various ecological niches existing in Machu Picchu, all thanks to the climate and the presence of cloud forests, being Machu Picchu.

There is a great diversity of plants over five meters high, whose flower is more than eight centimeters to 20 centimeters long, such as the Sobralia dichotoma, with fleshy flowers and also one of the smallest orchids in the world, a Stelis whose flower is barely two millimeters wide.

Behind the incredible structures of the Inca citadel and all the mystery that surrounds the 15th century citadel, there is such an impressive natural beauty that it has earned the title of Cultural and Natural Heritage of Humanity

Among the native tree species, the Q´euña (Polylepis Australis), the cedar (Cedrus), alder (Alnus Glutinosay), pisonay (Erythrina edulis), among others, stand out.

Regarding orchids, the Historic Sanctuary has around 400 registered species, many of which have been recently discovered and classified by science, as is the case of publication No. 15 of the specialized scientific journal Icones Orchidacearum that released to the world community the existence of 38 new records in 2015.

The smallest orchids are only a few millimeters in size and should be appreciated with a magnifying glass, as is the case with the Stenostachya Platystele variety, while the largest ones such as the Sobralia dichotoma can have branches that reach 4 meters in height, with multiple bouquets of flowers. The fertilization process of orchids basically depends on birds, butterflies and insects and the wind, which carry pollen from one region to another. These flowers, when they are fertile, open their petals spreading aromatic fragrances that invite pollinators to land on them. The time it takes for an orchid to reach adulthood or fertile age varies but usually takes between 5 to 6 years.

The surprising architecture of Machu Picchu harmonizes with its scenic beauty; the citadel, from the entrance to the seventh wonder is full of diverse flora and fauna that offers in a visual way the most complex concept of wonder.

When the Spaniards arrived, they found a great variety of medicinal and food plants, but they made little use of it and considered them: “Indian food, as a result of this contemptuous attitude in 1534 many plants are unknown to the modern world.

However, in the discovery of America, and fulfilling the objective of the commercialization of species, Columbus transported many Andean products. In October 2010 and 2011 Machu Picchu was recognized for two consecutive years as the best ecological destination in South America, surpassing the pantanal of Brazil and Patagonia of Argentina, thus becoming a transcendental historical and ecological place for tourism in Peru and in the world.

In the Inca wonder, in Cusco Airport you will find two botanical gardens, one inside the sanctuary and the other outside it. The first one is a few meters from the temple of the three windows and is one of the most important spaces of the site, it has 90 varieties of plants and flowers. In the botanical garden that is outside the citadel, specifically next to the site museum, there are 402 different species of plants, within them the ones that attract the most attention are the 123 varieties of orchids housed in the place, more in all the sanctuary there are 425 types. In Peru, according to research, there are approximately three thousand species of orchids, which constitutes 10% of the world total.

These flowers have been appreciated since pre-Columbian times for their infinite shapes and their variety of colors. The size range of some plants is so wide that it goes from less than one centimeter, including flowers, to more than seven meters in height. Some orchids have squat and tiny shapes; others, liana type, can reach more than thirty meters in length.

It is estimated that there are more than 30,000 thousand species of orchids on the planet. Malaysia and South America are the ones with the greatest diversity of orchids. Its size can vary, there are species that can only be observed with the help of a microscope, while there are others that exceed 4 meters. The latter can be found within the Sanctuary of Machu Picchu.

The queen of the orchids of Machu Picchu. It is so beautiful that it was the origin of an Inca legend: Waqanki. It has an iridescent surface and is of habit Cusco terrestrial airport, strangely epiphyte and develops between 2,100 and 3,310 meters of altitude. It presents a great variability in the color and shape of its flowers, being highly appreciated by growers around the world.

It is an epiphytic orchid that extends through Colombia, Ecuador, Peru (Cajamarca, Cusco) and Bolivia between 1,700 and 2,100 meters of altitude. In Machu Picchu it is found in two life zones: in the humid subtropical jungle and the pre mountain sub-tropical humid jungle. It blooms profusely and can produce more than ten large flowers in a cluster inflorescence that sprouts from the mature pseudobulbs. The flowers are very fragrant with a scent between jasmine and roses.

In the Historic Sanctuary of Machu Picchu it has been recorded in life zones from 2,060 to 4,150 meters of altitude, although in other areas of Cusco it has been recorded at lower levels. It usually grows in very humid montane forests growing through a climbing rhizome. In other countries it drops to 900 meters of altitude but its highest height record is in Machu Picchu.

It presents one of the most spectacular flowers within the genus due to its large size that averages 17 cm high by 10 wide. It blooms in two periods of the year, between April and June and then between October and November.

This beautiful epiphytic and miniature species (8 mm.), Whose name derives from the Greek meaning pointed tongue, is the most widely distributed species of the genus Platystele. It thrives in rainforests and cloud forests with warm to cold temperatures.

The great variety of flora of our territory is due to the different natural regions, microclimates, altitudinal floors, etc.

In the National Park of Machu Picchu the House of the Butterflies or Wasi Pillpi is located. In this place there are more than 100 endemic species and 400 known species. To visit it you must follow the path of the Jardines de Mandor and the Manuel Chávez Ballón Site Museum.

In this way you will be able to appreciate the flora and fauna of Machu Picchu in all its splendor and in its natural habitat.

Flora on the Inca Trail

In the case of the Inca Trail, the flora is distributed from 2,800 meters above sea level. up to 4,215 m.s.n.m. This variety of altitudinal floors, influence not only the vegetation, but also the climates. Nine life zones are considered that have been called subtropical humid forest (2,000 m.a.s.l.), where tall trees, shrubs and climbing plants abound.

Subtropical low montane humid forest (2,400 – 3,000 m.a.s.l.) presents a temperate and humid climate, it is characterized by being a very green forest with abundant trees.

Montane forest (2,000 m.a.s.l. to 3,000 m.s.n.m.), in this forest is the Huayna Picchu and Machu Picchu with a temperate and very humid climate that presents abundant vegetation, shrubs and orchids.

Very humid forest; It is a valley with the presence of slopes with vegetation, cold climate.

Subtropical moor; (3,800 – 4,000 m.s.n.m.) cold climate the highest pass of the Inca Trail, is considered within this ecological floor; The vegetation is pajonal type, small grass, it is characterized by the presence of sloping lagoons and slopes.

Pluvial tundra; It occupies the upper parts of the mountains up to the snowy mountains (4,000 – 4,900 m.a.s.l.) the climate is cold, presence of high-Andean pastures.

In the lower parts they are characterized rather by the greater abundance of vegetation such as pisonay, queña, alders, ferns, palm trees and puyas.

As the traveler enters the natural scenery of the Inca Trail that will take him to the Sanctuary of Machu Picchu, he will be able to observe the forest vegetation that is also represented by species of timber such as cedar, romerillo or intimpa, laurel, etc., in addition Of the mentioned species, the genera Ocotea, Pedocarpus, Guarea, Weinmania, Clusia, Cedropia, Cinchena, Eritrina, or Pisonay, Ilex, among others, predominate.

What most impresses the traveler visiting the high jungle is its exuberance and incredible profusion of life. Much of this lies in the fact that to access it it is necessary to cross the Andes mountain range, crossing the austere territories of the puna, where survival seems almost a luxury. Once the great barrier created by the Andean massifs has been crossed, nature seems to explode in a mosaic of color and movement. A world of waterfalls and torrents where humidity dominates the cycles and where plants and animals reach the highest levels of diversity in the entire world.

Just as the Inca trail is surrounded by plants, it is also observed that in its sunrises it is covered by an eternal shelter of fog, a mysterious and unknown world dresses the steep slopes of the mountain range. An evergreen territory where constant humidity is the main piece of the intricate natural gear. Here the rivers gain strength, descending sparkling towards the east and removing sediments from the mountains. It is the land of crystalline waterfalls and creatures as beautiful as they are elusive where the Incas raised the sacred city of Machu Picchu.