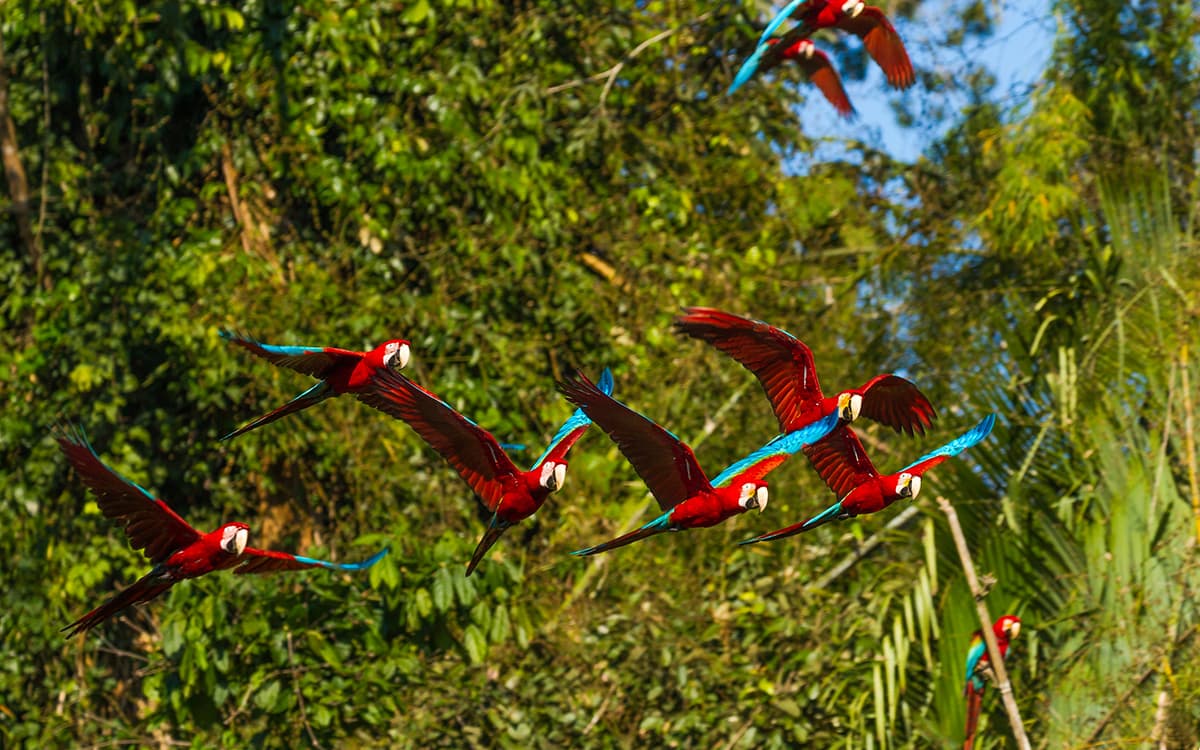 The Manu National Park, located in the Cusco and Madre de Dios regions, is one of the most important protected natural areas in the country and has a mega-diversity internationally recognized for its great biological diversity on the planet.

El Manu is one of the few territorial spaces that range from frigid highlands, which exceed 4,000 meters above sea level, rugged wooded mountains that give rise to a multitude of small streams and valleys, to cloud forests of high jungle to finally reach to the Amazon plain.

In 1973 the Manu National Park was established as a Protected Natural Area. Later, in 1977 Unesco designated it, in addition to the territories destined for colonization that adjoined the Park and the Manu Reserved Zone, as a Biosphere Reserve.

Ten years after its recognition as such, the Manu National Park was declared a Natural Heritage of Humanity for its extraordinary universal value.

The Park is surrounded by the Territorial Reserve of the Kugapakori and Nahua ethnic groups, the Megantoni National Sanctuary and the Amarakaeri Communal Reserve, territories that, together with those of the Mapacho river basin, intend to be integrated into the Manu Biosphere Reserve. The peoples that live in or around the Park have diverse cultural settlement patterns, and some are populations in voluntary isolation or initial contact.

The Cocha Cashu Biological Station is located in the core area of ​​the Manu National Park, where ecological and anthropological research is carried out. For its part, in its buffer and transition zone, sustainable development and resource management, recreation, tourism and environmental education activities are carried out.

Conserve representative samples of biological diversity from the tropical forest of southeastern Peru. Contribute to regional development through research, as well as the recognition and protection of cultural diversity and self-determination of the indigenous peoples of the area.

The Manu National Park also holds a new world record: it is the protected natural area with the greatest diversity of amphibians and reptiles on the planet.

This was highlighted by a study published in the scientific journal “Biota Neotropica”. The Manu National Park and its buffer zone protect 155 species of amphibians and 132 species of reptiles, says Rudolf von May, one of the authors of the research.

The researchers conducted the study with the support of the Association for the Conservation of the Amazon Basin, the Rufford Foundation, National Geographic Society, the US National Science Foundation (NSF) and the Wildlife Conservation Society.

Manu National Park is also recognized for having world records for species of diurnal butterflies (more than 1,200 species) and birds (more than 1,000 species) living in a protected natural area.

Likewise, the area has great cultural importance because it protects the territory of various ethnic groups including the Matsiguenka, Harakmbut and Yine, as well as indigenous groups living in voluntary isolation such as the Mashco-Piro.

Since the creation of the national park, more than 40 years ago, scientific research has contributed to the Manu being recognized as one of the symbols of Peru’s natural wealth and at the same time as an important tourist destination, because of the number of animals in Manu National Park.

This new research is also remarkable considering that Manu National Park represents only 0.01 percent of the world’s land surface, but is home to 2.2 percent of all amphibians and 1.5 percent of all known reptiles on the planet.

These discoveries are testimony that there is still much to know in the region. In 2012 alone, three species of frogs new to science – including the glass frog Centrolene sabini (recognized as the 7,000th amphibian species in the world) – were described from the Manu.

Many of animals in Manu National Park are called endemic, that is, they live in a small geographical area and are not found anywhere else on the planet.

Tourism in the Manu National Park

The Manu National Park seeks to protect a representative sample of biological diversity, as well as the landscapes of the low jungle, the jungle browbone and the Andes of southeastern Peru. Likewise, it is intended to promote tourism based on ecological and culturally compatible criteria.

On the other hand, the Manu National Park also seeks to promote and facilitate research, education and recreation, as well as to contribute to the preservation of archaeological heritage. Their presence contributes to the recognition and protection of cultural diversity, as well as to the self-determination of the indigenous peoples of the area.

The Manu National Park protects one of the most important areas of the planet in terms of the mega diversity of biological species. Its great extension crosses frigid highlands —which exceed 4,000 meters above sea level—; rugged forested mountains that give rise to a multitude of small streams and valleys; cloud forests of high jungle and finally the Amazon plain. This magnificent and unique setting includes a wide and complex hydrographic system and guarantees the presence of a diversity of ecosystems little intervened by man.

In these circumstances, the biological diversity that the Manu National Park houses is manifested in all its potential in a unique landscape on the planet. The Manu tropical forests have allowed ecological and evolutionary processes to take place almost without the presence of man, however, in the area there is also an enormous cultural richness, represented by the current indigenous populations at different levels of contact with the outside, and an archaeological heritage not yet revealed in all its magnitude.

Since 1977 the Manu National Park has the status of a Biosphere Reserve, which was granted by UNESCO. In its borders is the Territorial Reserve of the Kugapakori and Nahua ethnic groups, the Megantoni National Sanctuary and the Amarakaeri Communal Reserve. In turn, in 1987 it was declared a Natural World Heritage Site.

Much of the Manu National Park is indigenous territory. The communities of the Yora, Mashko-Piro, Matsiguenka, Harakmbut, Wachipaeri and Yine ancestrally inhabit the forests and rivers of these jungles. The native communities of Tayakome and Yomibato are recognized within the area. Both are located in the upper area of ​​the Manu River. In the southwest sector there is an association of farmers known as Callanga. Furthermore, in the northwestern sector adjacent to the Manu National Park (and in the interior) there is an undetermined number of indigenous populations in voluntary isolation.

Observation of Fauna and Flora

The PNM is home to a large number of wildlife species. It has registered about 160 species of mammals, more than 1,000 species of birds (mostly residents), about 140 species of amphibians, 50 species of snakes, 40 of lizards, 6 of turtles, 3 of alligators and 210 of fish. .

On the other hand, the number of insects in the PNM is very high. It is estimated that there are about 30 million species. In turn, more than 1,300 species of butterflies, 136 of dragonflies, at least 300 of ants (more than 40 species were found in a single tree) and more than 650 of beetles have been recorded.

With regard to the flora of the PNM, the number of plant species is very high. The various records indicate that there are at least 162 families, 1,191 genera and 4,385 identified species. In a single hectare, up to 250 varieties of trees were found. The aguajales forests are one of the most outstanding ecosystems, where the aguaje (Mauritia flexuosa) and huasaí (Euterpe precatoria) palms are the dominant ones. They develop on almost permanently flooded areas, especially on the right bank of the Manu River.

A total of 500 birds only around the lowland forests at the Cocha Cashu Biological Station, and the checklists of Terborgh, Janson and Brecht (1984) give habitats, foraging position, activity (sociability) and abundance of all birds and mammals found up to 1982. The bird species found in the Manu represent 25% of all known birds in South America and 10% of all species in the world and it is thought that it may more than 1,000 species of birds in total. According to Renton (1990), six species of macaws occur in lowland forests, Ara ararauna, A. chloroptera, A. macao, A. severa and A. manilata.

There are 13 species of monkeys, and it is estimated that there are more than 100 species of bats. There are also 12 species of reptiles within 7 families (ANU-CEPID, 1986), and 77 species of amphibians from the fire families are known from the Cocha Cashu area (Rodríguez, in press). There are no checklists for invertebrates, although the park has been estimated to contain some 500,000 species of arthropods. Again, most of the information has been collected in the lowlands, and little detailed information is available on mountain fauna. Species known as globally threatened that occur in the park include woolly monkey Lagothrix lagotricha, Emperor Tamarin Saguinus imperator, giant otter Pteronura brasiliensis (VU), giant anteater Myrmecophaga tridactyla (VU), giant armadillo Priodontes maximus (EN) Andean cat, ocelot Felis pardalis, Oreailurus jacobita (VU), jaguar Panthera onca, little eared fox Atelocynus microtis (DD), Speothos venaticus bush dog (VU), Northern Andes Huemul Hippocamelus antisensis (DD), Spectacled bear Tremarctos ornatus (VU), crocodile crocodilus crocodilus, and black caiman Melanosuchus niger (ES).

In one hectare of plot in the floodplains, 17 trees with a diameter of more than 70 cm were found (4 to 11 trees with a diameter of that type would be more normal). The largest tree was a Ceiba pentandra (120 cm), while others include the local Poulsenia armata rare (110 cm) and Calycophyllum sp. (117 cm), and locally endangered Swietenia macrophylla (105 cm) and Dipteryx odorata (100 cm). The most common tree in the plot was Otoba parviflora (IK), and other very abundant species including palms of the genera Astrocaryum, Iriartea and Scheelea, two species of Quararibea (Bombacaceae), Guarea and Trichilia (Meliaceae, both from the understory) , one (Pouteria (Sapotaceae), Pseudolmedia laevis (Moraceae) and Theobroma cacao Sterculiaceae). Another notable feature of these forests is the great abundance of Ficus sp., Of which there are at least 18 species – only 15 species of Ficus are mentioned in the Flora of Peru (Standley, 1937). Lianas are common, and 79 lianas of 43 species were found within 1,000 square meters With current knowledge of the park’s flora, it is not possible to give a detailed account of those found to be threatened, endemic, or species that may be economically important. Swietenia macrophylla and Cedrela odorata, which grow in nearly pure stands, are two of the economically important species for their wood, while Theobroma cacao and Quararibea cordata (CI) are grown for their fruit outside the park.

In the lower basin of the Manu River you can see the exuberance of the Amazonian plain. Five zones have been designated for the visit, where a high diversity of flora and fauna is concentrated, these are: Salvador, Otorongo, Juárez (these three are lakes), Pakitza and Limonal.

In these areas there is a great variety of circuits and trails to appreciate the beauty of the tropical forest. Also noteworthy are the horseshoe-shaped lakes or lakes where it is possible to observe species that in other ecosystems have disappeared, such as the river wolf and the black lizard.

Another attraction is the forests on both banks of the Manu River, where it is not only possible to observe a great variety of flora, but also numerous associated fauna. A landmark of attraction are the clay licks, where many species of fauna come. The aguajales also allow the concentration of typical fauna, such as macaws.

Some other touristics routes in Cusco are the salkantay trek tour, considered a National Reserve and the most fmaous is the classic inca trail 4 days 3 nights.