Museum of Religious Art in Cusco 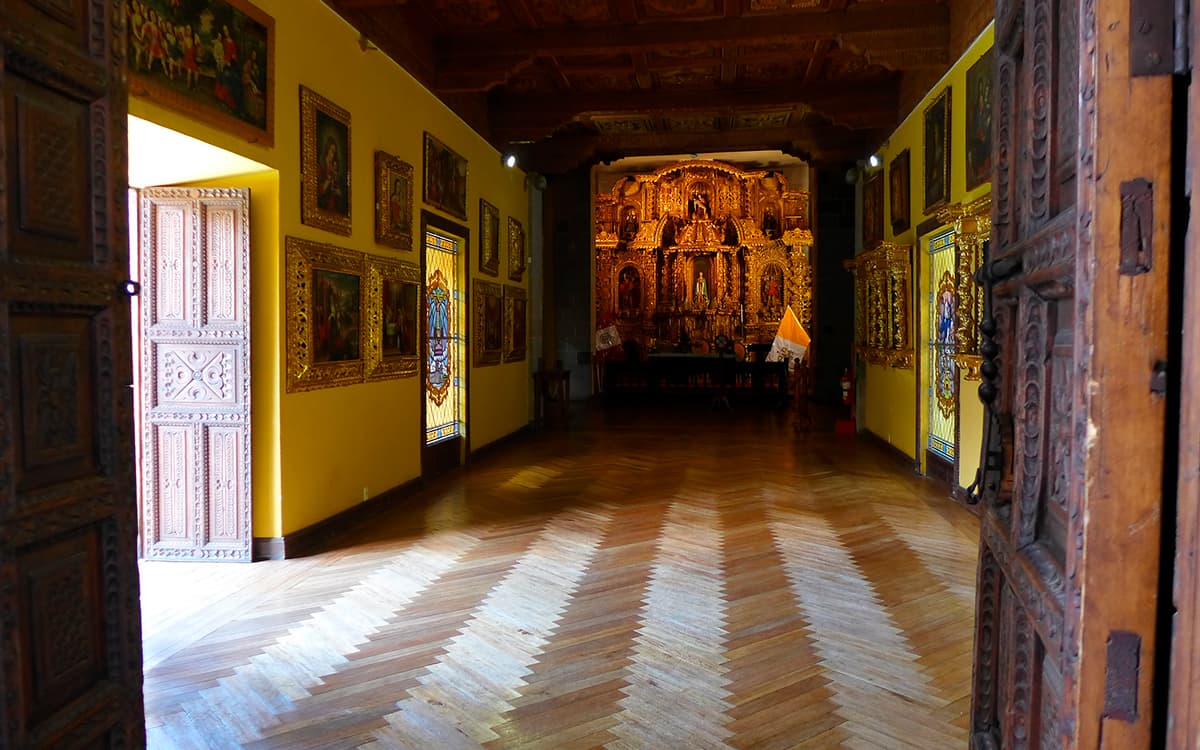 The headquarters of what was the former Archbishop’s Palace of Cusco, is today, the Museum of Religious Art of Cusco, and is located in the main square of this beautiful city. It is known that the Archbishop’s Palace turned into a museum, from the efforts made by Monsignor Ricardo Durán Flores, since 1966.

It is known that previously, before being the archiepiscopal palace, it was in Inca times, the palace of Inca Roca, however, with the arrival of the Spaniards, and when the distribution of lots between them, the so-called palace, It passed into the hands of the Marquisate of San Juan de Buena Vista and Rocafuerte, so the structure is the product of the mixture of both Inca and Spanish cultures.

Over the years, the structure passed through different hands that throughout its existence, left it in inferior conditions to the original. It was only in 1948, when the then Archbishop of Cusco decided and achieved the acquisition of the property. Thanks to the acquisition of the clergyman, the palace goes through a remodeling process that in the span of 9 years makes it possible for it to begin to be used as the archiepiscopal palace of Cusco.

Despite the above, the palace does not remain as Archbishop’s Palace for more than 9 years because the next archbishop of the city, is in charge of making it the current Museum of Religious Art of Cusco.

The current Museum of Religious Art in Cusco, includes in its heritage, a series of pieces that are made up of more than 200 paintings, religious pieces of Christ, carved in ivory, gold altarpieces, furniture of imagery, among others.

Among the main rooms that comprise this museum are the “Corpus Christi Collection Room” which includes in its collection a group of 12 canvases, of great beauty, that were a donation made by the Church of Santa Ana, also from this city. Another important room is the one that makes up the chapel of this palace and that includes among its pieces, the aforementioned gold altarpiece, in addition to a collection of paintings inspired by the life of the Virgin Mary, a bellows organ, and priceless paintings like the “Crucified Christ, the work of Alonso el Cano; “The Virgin of milk”, among others.

Two more rooms in this museum are the “Golden Room”, which houses the coats of arms of Monsignor Fray Vicente de Velarde and Manuel de Mollinedo y Angulo, as well as a series of religious furniture and important paintings; It is also found as part of the museum areas, “The Zodiac Series” which is made up of 9 paintings that were made by Diego Quispe Tito.

Whoever wants to know this impressive Museum of Religious Art in Cusco can do so by going to Calle Hatunrumiyoc, which is open to the public every day from 10 in the morning until 6 in the afternoon. The entrance to the museum costs 15 soles for adults and s / 7.50 for students. Visiting this museum is also an opportunity to see the famous “12 Angle Stone” that is located on one of the side walls of this ancient Inca palace.

On foot: 4 minutes from the Plaza de Armas.

It has a stone perimeter wall and inside there is a large Renaissance courtyard with stone arches and tiles on the walls and the stately pool located in a preferential place adorns it in the middle. Recognized because within its walls is the “The Stone of 12 Angles.”

On what had been the palace of the Inka Roqa, on Hatun Rumiyuq street, the palace of the Marquis of Buena Vista and Rocafuerte was built at the time of the conquest. It received the name of Archbishop’s Palace at a later time, when it was inhabited, it is believed, by the first Bishop of Peru, Fray Vicente de Valverde.

From that moment until the middle of the 20th century, this building, so representative of the first Andean colonial architecture, had different owners and was even abandoned. In 1948 it was bought by the Archbishopric of Cusco and, as of 1957, designated Archbishop’s headquarters, for which it was rebuilt and remodeled. It should be clarified that little remains inside what was the original Bishop’s palace.

In 1969 the José Orihuela Yabar Foundation founded the Museum of Religious Art, the first collection of which was donated by this same Foundation and religious entities. It consisted of paintings from the viceregal period, furniture and images of Christ in different materials. One of the most impressive works is the baroque altarpiece totally covered with gold leaves that can be seen in the chapel of the Archbishop’s Palace.

This Museum of Religious Art in Cusco exhibits one of the most important collections of the Cuzqueña School, with works made by Juan Zapata, Diego Quispe Tito (Zodíaco series) and Alonso el Cano, among other artists.

Why visit the Museum of Religious Art of Cusco?

The Museum of Religious Art in Cusco was formerly the home of the Inca Inca Roca and his royal panaca; And like many Inca structures were destroyed and at the same time used as foundations for the colonial houses and churches of the Spanish, this was not the exception either, leaving as evidence of its origins a stone wall that at the same time houses the famous “stone of the twelve angles”.

The Museum of Religious Art in Cusco, has a stone perimeter wall and inside there is a large Renaissance-style patio with stone arches and mosaic baseboards, Sevillian tiles on the walls, bars and in the center a large stately pool.

The Museum of Religious Art in Cusco houses a collection of religious colonial paintings, you can also admire the Moorish-style doors, the carved cedar ceilings and its spectacular stained glass windows. In plain sight, its portal stands out with its balcony, which were beautifully carved.

In addition to having one of the most emblematic stones of the city of Cusco “stone of the 12 angles”. The Museum of Religious Art houses a collection of religious colonial paintings. You can also admire the Moorish-style doors, carved cedar ceilings and spectacular stained glass windows.

Hours of operation of the Museum of Religious Art:

The Museum of Religious Art in Cusco can be visited by all people, both foreigners and national tourists, the entrance for this museum is inside the tourist ticket (BTG), this museum is located very close to the main square, specifically in the Corner from Hatunrumiyoq and Herrajes streets, in the old Archbishop’s Palace.

The Archbishop’s Religious Circuit is a tourist route for more than 400 years of history, art and faith of the Cusco people. Composed of four monuments located in the historic center of the city of Cusco: the Cathedral Basilica, the Archbishop’s Palace Museum, the San Blas temple and the San Cristóbal temple. We invite you to visit us, to learn more about the history of Cusco art and to live a unique experience in contact with the sacred.

Where to buy the Religious Circuit Ticket?

Hours of attention to tourist visits

Visiting Cusco is a real adventure whose protagonist will be yourself, instead of a memorable experience, that is why Cusco is definitely one of the most incredible cities with a great variety of archaeological centers and tours such as Sacred Valley, Camino Inca or Machu Picchu. To enjoy an unforgettable experience, contact Inka Trail Backpacker, a company that will better assist you during your visit, of course it is always with the necessary advice for you and yours as well as the guarantee, responsibility and security that characterizes us. If you visit the city of Cusco another impressive destinations that you can visit are the tour to rainbow mountain peru or the humantay lake tour from cusco, which only takes one day. But if you are gonna to stay more days in Cusco, other archaeological places you can know will be the choquequirao trek peru, the salkantay trek to machu picchu, and the classic inca trail 4 days 3 nights.