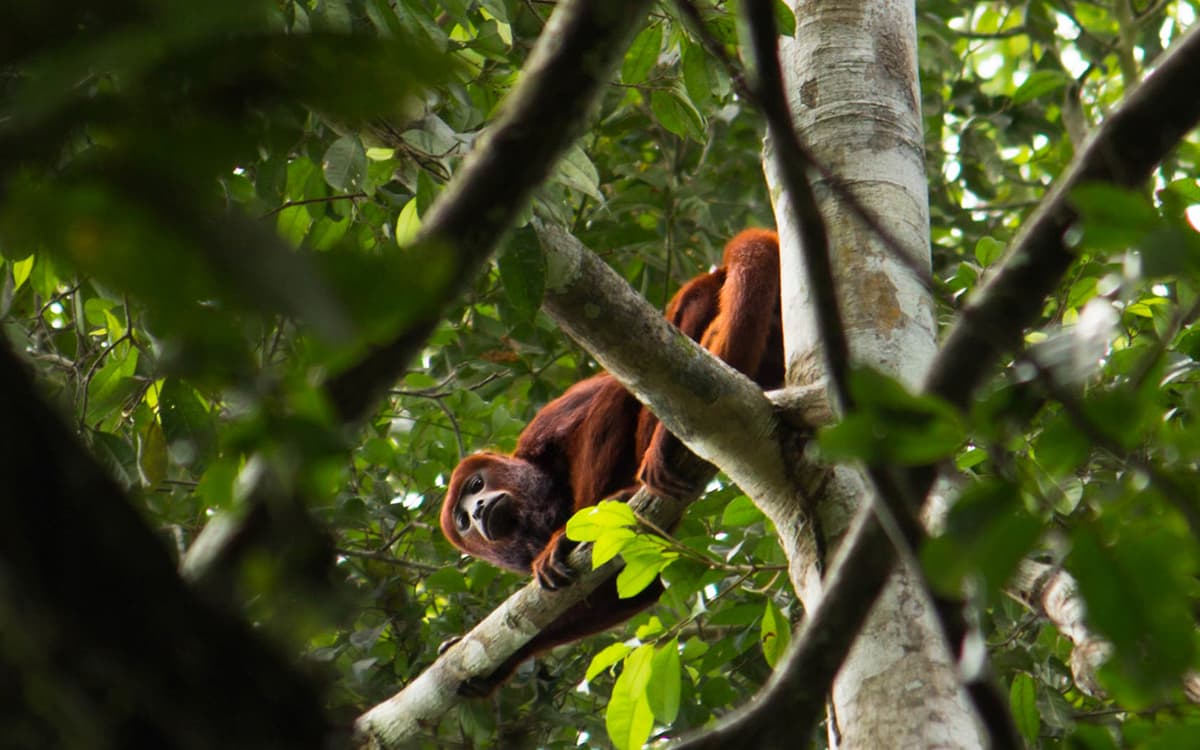 Pacaya Samiria National Reserve is the second largest protected area in Peru. It is a paradise for nature lovers, with a biodiversity that is manifested in more than 1000 species of animals and 965 species of wild plants.

This humid, tropical and flooded forest is an autonomous and exemplary ecosystem, which is home to lagoons like the El Dorado lake and native communities that have experiential tourism as one of their main means of subsistence.

It is the largest flooded tropical rainforest area in the Peruvian Amazon and, the second, largest, protected natural area in Peru, with an extension of more than two million hectares. It is located in the Loreto Region, Nauta district. It is bounded by the two great rivers, the Marañón and Ucayali, which originate the Amazon. It has three main basins: the Samiria, the Pacaya and the Yanayacu-Pucate.

The temperature is 28 ° C on average; rains can reach values ​​of 3,000 mm. yearly, humidity ranges from 80 to 90% all year round. In summer (June-September) the rains decrease, but never completely disappear, the phenomenon of “friaje” occurs, causing the temperature to drop to 16 ° C for a few days. In this region there are no seasons according to the common definition and when it comes to summer and winter, it is due more to the state of the rivers and the amount of rain than to changes in temperature and atmospheric conditions.

The Pacaya Samiria National Reserve can be visited all year round. From June to January, the “emptying” season, the water in the rivers drops considerably, navigation becomes slower, and it is the most recommended time to observe species of animals typical of humid areas such as lizards, river wolves, birds local and migratory.

In the rainy season, a large part of the area is flooded, its maximum expression is in the months of February and March, it is when imposing blooms and fructifications are manifested where it is easier to observe primates, mammals, insects etc. in areas of the Reserve that remain dry.

Emblematic of the Pacaya Samiria National Reserve, at any time of the year, are the friendly pink dolphins, who will accompany us in various sections, as if to invite us to learn more about this mysterious and fascinating world.

In the case of a natural area protected by the State, visitors must respect the visitation rules of the Reserve Headquarters, making an entrance payment and adhere to the indications of the park rangers and local guides.

The Pacaya Samiria National Reserve mainly comprises a low alluvial and floodplain forest. This topography, added to the alternating hydrological regime of the Amazon of rising and falling, determines an attractive landscape of lakes, streams, islands and flooded forest, which changes throughout the year.

The climatic conditions allow the Pacaya Samiria National Reserve to have a high diversity of flora and fauna and a great wealth of aquatic life: 527 species of birds, 102 of mammals, 69 of reptiles, 58 of amphibians, 269 of fish and 1025 wild plant species and cultivated. It protects threatened and endangered species such as the black lizard (Melanosuchus niger), the manatee (Trichechus inunguis), the charapa (Podocnemis expansa), the maquisapa (Ateles sp.), The river wolf (Pteronura brasiliensis) and the pink dolphin (Inia geofrensis) among others. In the surroundings of the Reserve there is an important human population that makes use of its resources and whose economy is linked to the hydrological characteristics of the increasing and emptying of the rivers. In 2002, a scientific expedition identified and described more than 300 species of birds in the town of Yarina and its immediate territory in 15 days.

The presence of more than 1,025 species of vertebrates has been reported, which represents 27% of the diversity of these species in Peru and 36% of the total registered for the Amazon. It houses important species of wild fauna considered as indicators of the good state of conservation of their territories, such as the sea cow or manatee (Trichechus inunguis), the pink dolphin (Inia geoffrensis), the gray dolphin (Sotalia fluviatilis), the yellow-fronted maquisapa (Ateles beltzebuth), the river wolf (Pteronura brasiliensis), the puma (Puma concolor), the sachavaca (Tapirus terrestris), the otorongo or jaguar (Panthera onca), the huangana (Tayassu pecari), the sajino (Tayassu tajacu) , the red deer (Mazama americana), the maquisapa (Ateles paniscus), the box monkey (Alouatta seniculus) and the woolly monkey (Lagothrix lagothricha).

The ornithological fauna is made up of 449 species, where the populations of birds related to aquatic environments stand out, which are also excellent indicators of the state of conservation of wetlands. Among flora in Pacaya Samiria are the white heron (Egretta alba), the ash heron (Ardea cocoi), the puma heron (Tigrisoma lineatum), the cushuri (Phalacrocorax brasilianus) and several other species.

Reptiles include the charapa tortoise (Podocnemis expansa), the taricaya (Podocnemis unifilis), the black lizard (Melanosuchus niger) and the white lizard (Caiman crocodylus). Hydrobiological resources are the most important of the RNPS both for their role in ecological processes and for their economic value, they are also the basis of the diet of local people.

Also noteworthy is the presence of a large number of ornamental fish for export, such as the tiger zúngaro (Tigrinus peruvianus), the arahuana (Osteoglossum bicirrhosum), the stingray (Potamotrygon motoro), the tetra (Hyphessobrycon erythrostigma) and dozens of other species.

With regard to flora in Pacaya Samiria, the are more than 965 species of wild plants and 59 of cultivated plants. Its value for the protection of biological diversity is widely justified by the presence of immense extensions of aguajales or aguaje forests (Mauritia flexuosa) and mixed forests of other palm trees.

The Pacaya Samiria National Reserve has four information rooms at the Nauta Caño, Yanayacu, Samiria and Tibilo Pastococha lookouts. In addition, there are 19 guard posts and 21 community guard posts. There are also 15 authorized camping areas in the 8 areas for tourist use, three shelters in the Yanayacu-Pucate basin and two shelters in the San Martín de Tipishca community. The multi-day river circuits in the limits of the reserve are offered by companies that operate in Iquitos and Lima.

Being such a large area, there are several routes and activities offered. Thus, there are eight areas allowed for tourist use:

The Yanayacu-Pucate basin, from the Veinte de Enero community, near Nauta, to the famous El Dorado lake. It is the area where the largest number of shelters and camping areas are located along the river. The El Dorado lagoon is considered the heart of the Pacaya Samiria National Reserve and one of the places with the highest concentration of fauna.

In the lower and middle basin of the Samiria River, visiting the Yarina, Fortuna and Ungurahui lakes. In addition, in San Martín de Tipishca, at the beginning of the basin, you can live with the inhabitants of the Kukama Kukamilla native community, who also offer several circuits to go, both on foot and in canoes.

In the lower Pacaya basin, where lakes abound and the forest remains flooded for most of the year.

How to get to Pacaya Samiria National Reserve?

There are two ways to get to Pacaya Samiria National Reserve:

To get to Pacaya Samiria National Reserve by private bus and / or car from Iquitos to the city of Nauta 2 hours (100 km.). From Nauta to Santo Domingo, 2-hour boat ride (40 km). From Santo Domingo to Yarina: by boat approx. 3 to 4 hours, depending on the season (60 km)