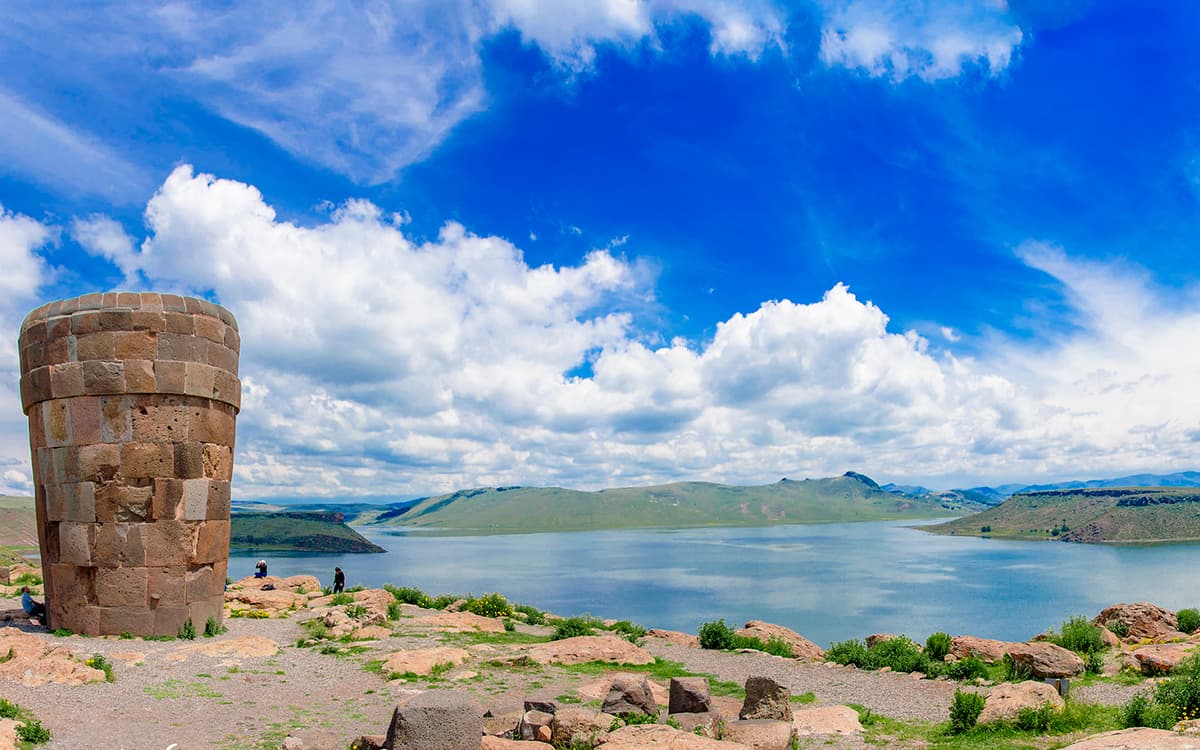 It is located on the Collao plateau, the highest in the Andes of South America. It limits the north with Madre de Dios; to the east with Bolivia; to the south with Tacna; to the west with Moquegua, Arequipa and Cusco. Its appearance is that of an immense plain covered with pastures or grasslands, on whose horizon some snow-capped mountains emerge.

Puno has a flat relief, the altitude of Puno is almost 4,000 meters above sea level.

The city of Puno is located 1,324 kilometers southeast of the city of Lima. By land it communicates with Arequipa, Tacna, Moquegua, Cusco and with La Paz – Bolivia.

There is a port, which communicates the city with the different islands of Lake Titicaca, here we can locate 3 ships, which are in charge of safeguarding the Peruvian sovereignty of Lake Titicaca.

It is also connected by land with the Republic of Bolivia, since one of the most important international bridges on the living border between Peru and Bolivia is located, in the Desaguadero International Bridge. The Interoceanic Highway is planned for this town, which will unite the Peruvian Pacific coasts with the Brazilian Atlantic coasts.

If you have finally fallen into the temptation to visit us, here you can find the best hotel deals with panoramic views and high quality architectural designs, located in the best areas of each city in the best destinations in Peru.

The city of Puno constitutes the third city that receives the largest flow of foreign tourists after Cusco and Lima, as it is immersed within the most important receptive tourist circle in the country, which is Lima-Cusco-Bolivia, in both directions.

For various reasons, natural assets and natural resources, tourism in the department of Puno has become one of the main tourist destinations in Peru, because it has first-rate hotel infrastructure, attractions, services, and means of support. That is why we invite all of you who visit this website at depuno.com to visit Puno and its tourist attractions and experience the magic of sailing on Lake Titicaca, one of the highest and most navigable lakes in the world.

In Puno, Lake Titicaca and the Floating Islands are the main tourist attraction in the department of Puno. The splendid landscapes and the fascinating life of its inhabitants deserve a visit to the Taquile and Amantaní islands.

Lake Titicaca is the highest navigable lake in the world. It has an area of ​​8,560 square kilometers and a maximum depth of 227 meters. There are 36 islands, the most important of which are Taquile, Amantaní, Soto, Anapia and Uros.

Las Chullpas de Sillustani, imposing and desolate landscape at an altitude of four thousand meters. Around a lagoon there are pre-Inca circular towers that served as tombs for Aymara nobility figures.

The highest navigable lake in the world is a spectacle wherever you look at it. Surrounded by dense vegetation where the reeds prevail, it is inhabited by various islands, and each one of them has a different story to tell.

Taquile, Amantaní, the floating islands of Uros, offer experiences where it is possible to live directly the tradition and customs of a people that has known how to rescue the best of its environment and coexist harmoniously with it.

Lake Titicaca in Perú is one of the most famous destinations in the country, along whit the inca trail to machu picchu, and the recently discovered rainbow mountain peru tour.

Tourism in Lake Titicaca in Puno

In the islands and communities on the shores of Lake Titicaca, initiatives that leave most of the benefits to the communities themselves have been prioritized. In this sense, those that promote agrotourism and lodging houses managed by local people, which allow the visitor a more direct contact with local cultures, are of particular value. This is the case of the tourist products that the communities of Lake Titicaca offer with such success. Interesting and unique proposals that could be replicated with similar success in other parts of Peru.

Aware of the value that living culture has today for travelers from all over the world, a series of Puno communities have opened up to experiential and rural tourism, both on the islands and on the continent. There are the enterprises of Taquile, Amantaní, Uros, Llachón. These ventures are combined in a peculiar way with those located south of Cuzco, so that the traveler, when visiting them, gets an idea about the diversity that exists in the southern Andean corridor of Peru.

For bird watchers, birdwatching in this area offers unique opportunities, especially for the observation of high Andean, endemic and migratory birds, both on its shores, islands and more prominently in the Titicaca National Reserve.

Shortly before sunrise on Lake Titicaca in Puno, a blue haze covers our vision and prevents us from looking clearly around us. Restless by the cold and the calm that precedes the light, dozens of wild guinea pigs scurry between the rocks and the ichu grown on the shore. Lost among the cattails, a little seven-colored begins his day with a short and fearful song; the ducks and the colts break the silence of the waters with a sudden movement of their wings, just when the first ray of sunlight touches the tip of a nearby hill. As if it were an act of magic, the fog disappears between the golden sparkles of the reeds and the waters of the lake begin to reflect the intense blue of the mountain sky. A new day has begun on Lake Titicaca.

Lake Titicaca located in the department of Puno at 3,808 meters above sea level and with an area close to 8,200 km2 -of which 4,700 are in Peruvian territory- Titicaca is the highest navigable lake in the world and is, without a doubt, the symbol of the Puno identity. Lake Titicaca in its deepest part, next to Soto Island in Peru, reaches 280 meters and has a shoreline length of 1,150 km, more than 30 islands and an approximate volume of 840 cubic kilometers. The hydrographic basin that forms Lake Titicaca has a length of almost 60 thousand km2 that extends in the Collao plateau, in the middle of the Eastern and Western mountain ranges of the Andes.

The importance of Lake Titicaca in Puno transcends geographical and historical qualities, it takes on particular value in logical terms as it acts as a temperature regulator in the surrounding areas and a source of resources for the inhabitants of the highlands. The cattails that grow in its waters are a key element in the survival of an important diversity of birds such as the yanavicos (Plegadis ridgwayi), the seven-colored cattail (Tachuris rubrigastra), the totorero (Phleocryptes melanops), the moorhens ( Gallinula chloropus), the coot (Fulica ardesíaca), as well as several species of ducks (Anatidae).

The open waters of Lake Titicaca in Puno are the habitat of parihuanas (Phoenicopterus chilensis) and an endemic species of the lake: the Titicaca diver (Rollandia microptera). Its frozen bottom is also home to 14 species of fish of the genus Oresüas, commonly called carachis, and the Titicaca frog (Telmatóbius culeus), a large species that uses the long folds of its body to retain the little oxygen that possess the waters.

In order to protect part of this natural wealth, the Titicaca National Reserve was created in October 1978, on an area of ​​36,180 hectares divided into two sectors: Ramis, located in the province of Huancané, at the northern end of the lake; and the Puno bay sector, located near the departmental capital.

The waters of Lake Titicaca in Puno are home to an endemic species (which only thrives in this place): the Titicaca grebe (Rollandia Microptera), a bird unable to fly, much like a duck, but with a pointed beak and small wings that feed mainly on fish which they catch by submerging themselves in the icy waters of the lake to a depth of 100 meters.

The titicaca diver can measure up to forty centimeters and has a yellowish-brown color, but white on the underside. It usually builds floating nests in the densest areas of the cattail where it lays its eggs with a bluish shell. It is currently in a vulnerable situation due to loss of habitat, poaching and egg collection, and is protected in both sectors of the National Reserve.