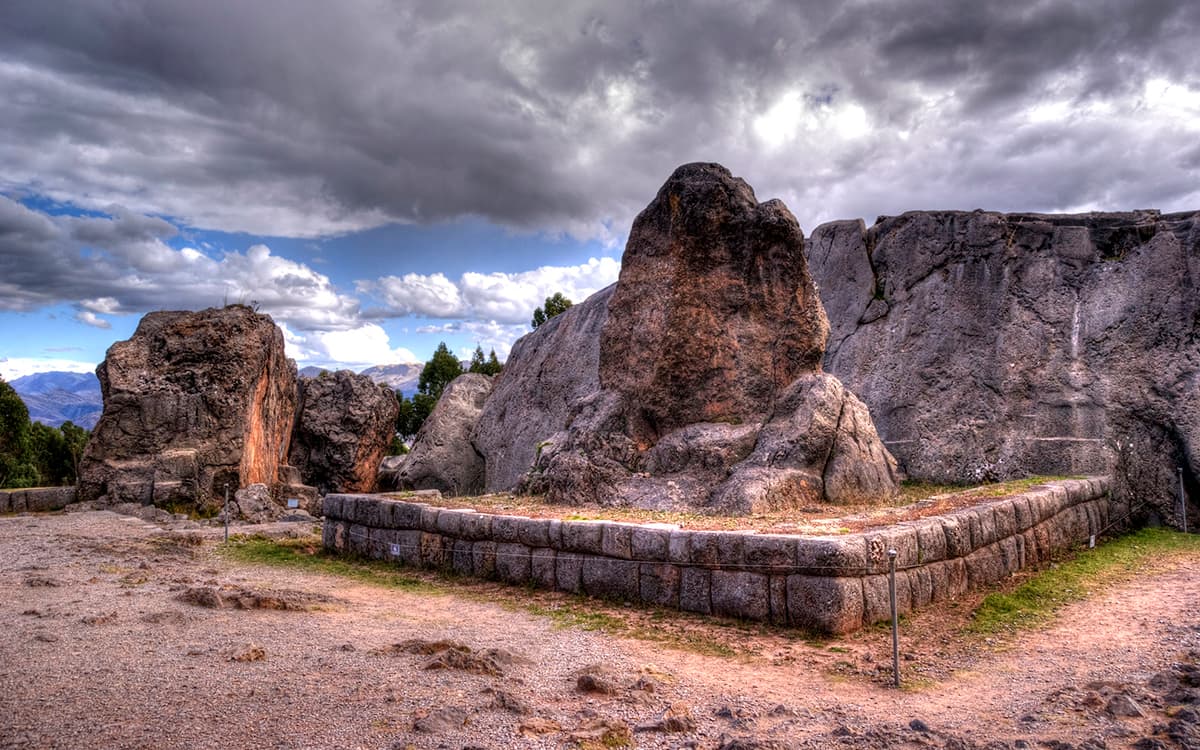 Qenqo, which means labyrinth, is a very special place. In the Andean worldview, this huaca was built to evoke Kaypacha, the ancient serpent or origin of life. Also, the ancient Peruvians used this site to communicate with other deities such as the sun, the mountain, the moon, the earth, and the stars. Everything is arranged in a secret and magical way: the canals, the labyrinths, the amphitheater and the sacrificial room.

Although the original name of this shrine is not known, the Spanish conquerors decided to name it with the Quechua word Qʻenqo, which means “labyrinth”, perhaps because of the labyrinthine underground galleries or the small channels carved into the rocks in a zigzag shape.

The Spanish classified this monument as an amphitheater, probably because it shows a semicircular construction. In reality, the purpose of this cyclopean construction is unknown, which may well be an altar, a court or the tomb of an Inca, perhaps from Pachacútec. It is presumed that it was one of the most important sanctuaries that there was in the Inca.

Both are places of worship whose nature has not yet been deciphered, but in which the predilection of the Incas for stone and the care they took in carving stands out.

The Q’enqo Archaeological Complex is located 4 kilometers from the Plaza de Armas of Cusco. It is over 3,580 meters above sea level (m.s.n.m.). On board a taxi you can arrive in 5 minutes through the paved road northeast of the city of Cusco. The enclosure is located on the Socorro hill and has an area that exceeds 3,500 square meters.

Although the original name of this shrine is not known, the Spanish conquerors decided to name it with the Quechua word K’enko, which means “labyrinth,” perhaps because of the labyrinthine underground galleries or the small channels carved into the rocks in a zigzag shape.

Areas that make up Q’enqo Archaeological Complex are:

During the Inca Empire this place was a temple for public ceremonies. It is a huge semicircular area 55 meters long with 19 incomplete niches distributed along the wall. In some publications it is stated that the niches were arranged around the amphitheater as seats for the entities that were worshiped, but according to recent research it is very likely that they were actually the foundations of a great wall. In front of the free area is a large 6-meter high stone block resting on a solid rectangular pedestal. It is possible that it was a gigantic sculpture that must have had zoomorphic modeling. The lack of precision is due to the traces of destruction caused by the extirpators of idolatries (people in charge of eliminating the icons of the local cult) during the Colony. It also has a rocky ledge decorated with a passage that leads to an underground room, a complex of platforms, rooms and a system of drainage channels designed to evacuate the water from the place.

Behind that stone rises a rocky promontory in which a stair carved in the living rock leads to the summit. There the small zigzag channel is born which, starting from a minor hole, descends and then forks into a branch that follows the slope and another that reaches the underground chamber inside the rocky area.

It could have served to carry the offered chicha or the blood of the llama sacrifices of some ritual not yet clarified. On the same summit there are carved remains of what could have been a condor, whose head was broken, as well as that of a puma. Remnants of a room can also be seen.

Two short cylinders stand out on the leveled and polished living rock. It is likely that it was an Intihuatana, which translates as “place where the sun is tied”, that is, it allows to calculate the position of the sun. It is not known how this device worked. It is an enigma to this day. But it is presumed that it was a kind of astronomical observatory used to measure time, to establish the seasons, determine the solstices and equinoxes, and as a shrine it worshiped the Sun, the Moon, Venus and the stars.

It is a Quechua name that means “temple or place that has monkeys”. It is located 500 meters directly east of Quenqo Grande. It has a carved stone almost two meters high in which some believe they see the shape of a toad. On that rock there are still visible reliefs of snakes and monkeys that may have given the place its name.

The rock carving done here is quite a feat. Floors, ceilings, walls, tables, and niches were carefully carved out of living rock. Without a doubt, it was a place of worship for secret and hidden rites. The site builders completed their composition with service rooms on the perimeter. It also has platforms and channels for the evacuation of rainwater.

It is located very close to the Intihuatana. The Cusco historian Víctor Angeles describes it as follows: “part of a small hole, it moves in an inclined plane and broken line, then forks, one of the branches led the liquid to circulate to the Underground Chamber or Sala de los Sacrifices “. The liquid could be the blood of sacrificed beings (animals and / or humans) to the gods.

The mystery of the Andean cult is one of the attractions of the Inca culture. Regarding the so-called “Room of Sacrifices”, doubts have not yet been resolved. It is an underground chamber, carved entirely out of a gigantic rock. In the lower portion of the great rocky area there are carved floors, ceilings, walls, tables, cupboards and openings. It is said that this underground chamber may have been used to embalm dried apricots, but it is also possible that human and animal sacrifices were carried out there.

How to get to Q’enqo Archaeological Complex?

About 15 minutes from the main square of Cusco by bus, very close to the fortress of Saqsayhuaman. You can visit Qenqo through a City Tour (Pull) offered by any tourism agency (almost all offer this service) or on foot walking an average of 50 minutes from the city of Cusco or you can take a Private Tour.

How to get from Cusco to Qenqo Temple?

Qenqo Temple is a part of Peru that is at least 6 km2 from Cusco, from which you can have a quick access route from Cusco, from there excursions or tourist tours of the best agencies leave.

How to get there by public transport?

From the Plaza Armas de Cusco there is a starting point, from there it is approximately 4 km2 to get to Qenqo Temple, in which there is an asphalt road that will take you to this wonderful architectural complex, this tour lasts for at least 15 minutes.

How to get to Qenqo Temple with a travel agency?

There are many travel agencies that on your tour you will find Qenqo, a wonderful place with the largest architectural complexes in Peru. Travel agencies have different points but without a doubt one of them has to be the Plaza Armas because from there you will find the routes that go to Qenqo grande and Qenqo chico.

The Cusco Integral tourist tickets have a cost of 130 Soles and the Tours to Qenqo is one of the destinations, in which the Inca architectural complex can be known. In which tours of Qenqo grande and Qenqo chico will be made.

What to do in Qenqo Temple?

What to do in the archaeological complex Kenko or Qenqo There are mostly excursions, walks and supposed adventures throughout the territory of Qenqo.