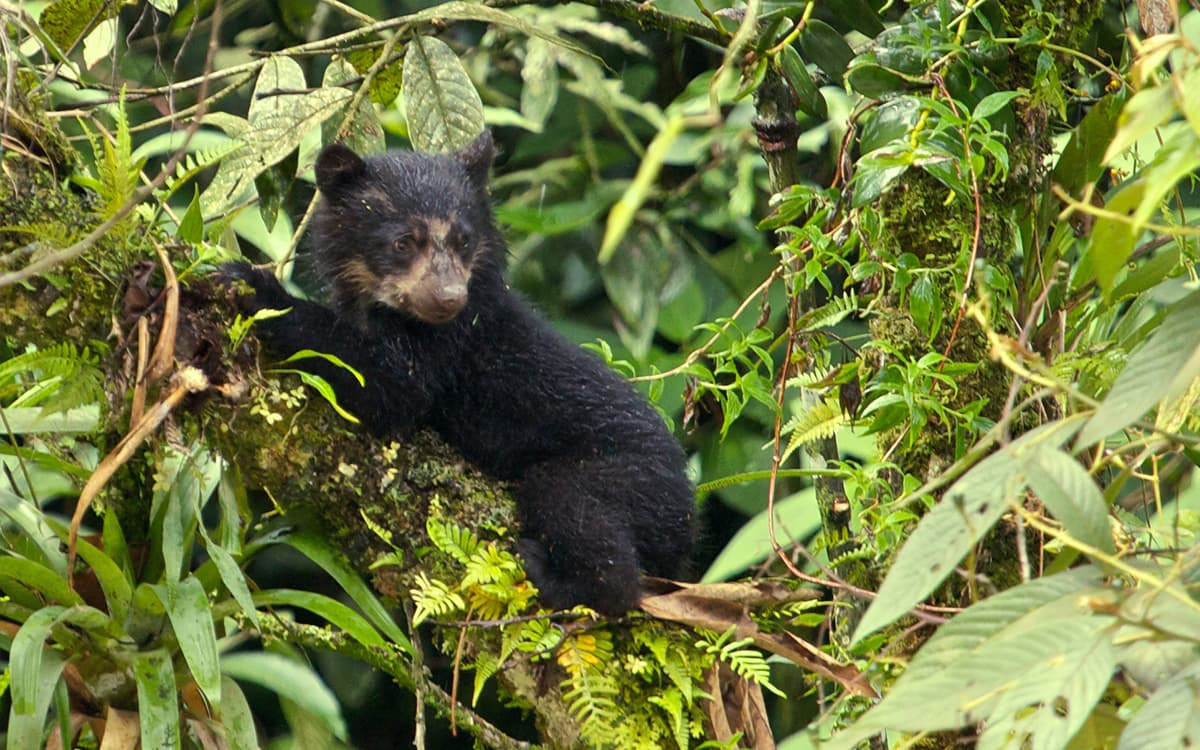 Many times the famous Andean bear has been sighted in the historical sanctuary of Machu Picchu walking calmly around some Inca rooms or walking on the terraces, now we learn about this peculiar visitor.

The spectacled bear (Tremarctos ornatus), also known as the frontin bear, Andean bear, South American bear, ucumari and jukumari, is a species of carnivorous mammal in the Ursidae family.

It is the only species of bear present in South America

Their fur is generally black and some have brown hues.

It has yellowish spots on the neck, chest and around the eyes, in the form of glasses, hence its name.

Bears are solitary and only meet in pairs during the breeding season or to feed.

When they move and feed, they disperse the seeds of the fruits, thereby promoting the generation of forests.

It inhabits various ecosystems in Peru and is present between 250 and 4750 meters of altitude.

It inhabits the Andes mountain range from the west of Venezuela and through Colombia, Ecuador, Peru and Bolivia to the northwest of Argentina.

In Machu Picchu there is a natural reserve of spectacled bears. Managed by the Inkaterra association in alliance with the English foundation Bear Recue. The Nature Reserve is home to 5 specimens, of which there are three males and two females, species rescued from circuses and places that kept bears in inadequate conditions of captivity. The reserve exists since 2000.

Loss of habitat, due to urban and agricultural expansion, logging and informal mining.

In some places, the bear is hunted because it feeds on some agricultural crops or eventually livestock.

They are hunted due to the false belief that some of their parts have magical and aphrodisiac properties.

They are caught illegally to be sold as pets (when they are puppies) or to be used in circuses.

It is common to spectacled bear and their cubs in Machu Picchu.

Machu Picchu is a sanctuary for spectacled bears, it is the only place in South America where you can see them roaming freely, they play among the terraces of wonder and do not pose any threat to visitors.

The spectacled bear in Machu Picchu

It is a native of South America and is called that, because around the eyes it has circular white spots. Eat fruits, stems, leaves, and fish or a bird from time to time. It has become common to see spectacled bears with their cubs playing near the buildings of Machu Picchu. They can be seen from very early to around 4 pm, but they only stay for a few minutes, after attracting all eyes they return to the forest in search of another place to play.

The popularity of the spectacled bear

The spectacled bear in Machu Picchu is recognized worldwide for its white spectacles and because it appears on the list of endangered species; and one of the most original souvenirs of this beautiful animal that you can get in Peru, may be the one-sol coin recently included in the collection of limited edition coins of the Central Reserve Bank of Peru.

Other places near Machu Picchu where you can see spectacled bears

Pepe, Kina, Coquito and Yosi, are four beautiful spectacled bears living in the Andean Bear Conservation Center of the Inka Terra Association. Their diet consists of fruits and vegetables of 12 to 18 kilos a day and one to two kilos of fish or chicken a week.

The objective is to ensure that they breed in captivity and try to reverse the situation of vulnerability that has made the species from the humid forests of Machu Picchu enter the list of endangered animals. The place has a cave, a water source and a restored forest with native trees, shrubs and grasses, which serve as shelter and food for the bears.

Touring Cusco and Machu Picchu is discovering endless mysterious places, with hidden stories in corners that you may have never seen before stepping on this country. We recommend you to visit another impressive destinations in Cusco like the tour to rainbow mountain peru or the humantay lake tour from cusco, which only takes one day. But if you are gonna to stay more days in Perú, other archaeological places you can know will be the choquequirao trek peru, the salkantay trek to machu picchu, and the classic inca trail 4 days 3 nights.

What other animals can I see in Machu Picchu?

To fully enjoy your adventure, home to 582 different species of animals, of which 42 are unique in the world, meet some of biodiversity of Machu Picchu that you may come across on the way:

Also known as the spectacled bear or ucumari, it is an animal that is under constant threat from illegal hunting and the loss of its habitat. With great luck, he has been seen walking around the citadel despite being very elusive. This species is very loved in the world by the character Paddington, an Andean bear who traveled to England from our country.

They are the smallest members of the deer family, they are also known as pudúes or also deer, due to their similarity to other cervids that bear that name. Unfortunately, they are in danger of extinction and seeing them can be a bit difficult. They have been seen in areas between 2,000 and 4,000 meters above sea level.

This is a very important animal in Andean mythology, since it is part of the Inca trilogy. It is the second largest feline in America and to see it, you will need a lot of luck. Its ecosystem within the Sanctuary are areas of dense vegetation. In this way, it cannot be seen by its prey.

Cock of the Rocks

Also known as the national bird of Peru, this specimen is associated with Machu Picchu and is seen in large trees, on which it feeds many times hidden between its leaves. Seeing it is easier than it seems, but you will need to pay attention to the trees and their song.

This large bird is one of the largest in the world that is capable of flight. They can weigh up to 15 kilograms, so they prefer windy areas to stay in the air. They have been seen on the ruins of Machu Picchu and at the highest points of the Inca Trail.

If you do the Inca trail, you can see it along the route. It is the largest hummingbird in the world and can be slower than others of its kind. You will recognize it by its light brown color and it is similar to a large swallow.

Llamas and alpacas are in the plains of the citadel, you will see them enjoying their natural environment, but remember to respect their space and above all, not to intervene in their feeding.