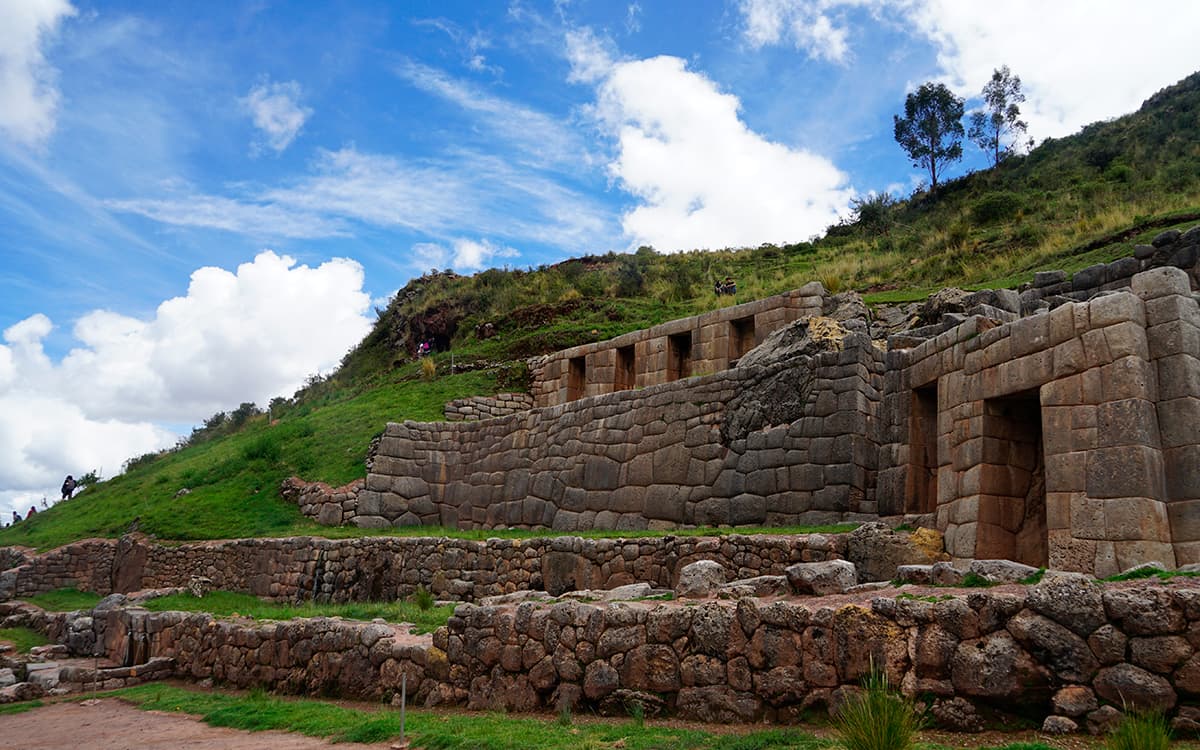 The archaeological complex of Tambomachay is also known as the Inca Baths, and is one of the most important Inca constructions. This is due to the great mastery and extraordinary assembly of the stones that form its walls. It has an amazing underground hydraulic system, and this is very simple to explain, the Inca civilization venerated water as a life-giving deity.

Tambomachay is located 5 kilometers from the city of Cusco and 0.6 kilometers from Pucapucara. To get to Tambomachay you can take a City Tour from any travel agency (almost all of them offer this type of service). You can also get there by taking the transportation Cusco – Pisac or Cusco – Calca.

Meaning of the name

It corresponds to the collective accommodation with everything necessary to accommodate a large number of people who stay for a short period of time, Machay means place of rest. The name comes from the Inca period.

The archaeological zone is notable for the excellent architecture employed. Observing four walls or stepped terraces attached to the hill, built on the basis of irregular polyhedra of carved stone, with a great assembly technique, thus forming three parallel platforms. On the last one a thick wall is built (15 meters long by 4 meters high) adorned with four niches. The stones have been perfectly fitted. It has four large trapezoidal niches or niches measuring two meters on average. In front of the construction there was a circular tower that must have had defense and communication purposes.

Water itself was revered as the source of life. Tambomachay has an extraordinary hydraulic system; observing two aqueducts artistically carved in the rock, where a constant flow of clean and clear water is transported and maintained throughout the year, which comes from a pool that is at a higher level. This network of underground channels spills its waters into a small stone pool at the lowest level. For many, this pool had to be a liturgical fountain, where the Inca worshiped water together with the priests of the Inca empire.

Tradition knows this place as the «Ñusta Bath», due to the special circumstance of having two aqueducts that have drinking water all year round, which come from wells that are places known only to the builders, and it seems that it gave birth the bases of the Inca construction, the volume is uniform, the water gathers and falls in what is known as a liturgical fountain as «Inka Bath», in front of this building there is an immense circular watchtower

The building has three floors that come from the ground up, which is equivalent, as a house with three stores. The construction is done in an exceptional way, which the rocks were very well fitted, without mud mortar.

Heres is a list of some Facts about Tambomachay that not many people know:

Due to its altitudinal location on the slopes of a mountain and on the river of the same name, it is presumed that in the past there was abundant Andean fauna in the place. It is for this reason that some chroniclers assure that the enclosure was the hunting area of ​​the Inca Túpac Yupanqui.

Tambomachay is one of the best examples of the Inca’s skill in handling water. The enclosure presents water channels made of carved stone that end in two slopes where crystal clear water flows every day of the year. There is a platform that served as a liturgical fountain and, probably, Inca baths.

According to the Andean worldview, water was a source of life. It was believed that this symbolized the masculine and the earth (pachamama) the feminine, so the union of both caused fertility. The network of channels that filtered water in Tambomachay poured the liquid into a platform at the bottom where the Inca worshiped water.

Tambomachay was built over a river, springs and streams. Although it is not known for sure where exactly the water that flows in its channels comes from, the magnificent distribution of the liquid amazes the world.

The archaeological site of Tambomachay is located under the protection of a chain of mountains and over rivers and underground springs. The nature that surrounds it is characterized by the abundance of ichu, a natural grass that grows in altitude zones.

In Tambomachay the stones were carved and assembled irregularly but with such perfection that they still stand upright after almost 600 years. The main wall is located at the top. This construction consists of 4 trapezoidal niches of up to 2 meters. Due to the height of these walls, it is presumed that they also served as defense against possible enemy attacks.

Acoording to the history of Tambomachay, in Inca times it was an important water worship center and is known to the present day as the “Baños del Inka”.

Its name comes from two Quechua words Tambo = “collective accommodation” and Machay = “place of rest”. Although some scholars believe that machay, which also means “cave”, is the most appropriate interpretation for the name, due to the peculiar rock formations that exist around the archaeological remains.

The monument is notable for its architectural excellence. There are four staggered walls or terraces attached to the hill, built on the basis of irregular carved stone polyhedra, which form three parallel platforms and are masterfully assembled.

This set is made up of walls, windows and water channels that end in a trapezoidal slope from where crystalline water emanates.

On the last one a thick wall is erected (15 meters long by 4 meters high) adorned with four niches. The stones have been perfectly fitted. It has four large trapezoidal niches or niches measuring two 2 meters on average. In front of the construction there was a circular tower that must have had defense and communication purposes.

Tambomachay has an extraordinary hydraulic system. Two aqueducts artistically carved into the rock carry and maintain a constant flow of clean and clear water throughout the year, which comes from a pool that is at a higher level. This network of underground channels discharges its waters into a small stone pool at the lowest level. This pool was a liturgical fountain, where the Inca worshiped water.

Of what remains no doubt is the perfection in the carving of the channels. The sound of water, the tranquility and peace of the environment, as well as the closed and collected form of the space in which it was built, give Tambomachay a peculiar atmosphere. In addition, it is a great example of the ability of Andean architects to harmonize constructions with the landscape.

How to get to Tambomachay?

To get to Tambomachay you can take any City Tour (Pull) from any travel agency (almost all offer this type of service), or you can take a private tour.

What do you need to visit this site?

To carry out this tour one needs to have the tourist ticket, and have the services of a travel and tourism agency that do it daily from 2:00 p.m. to 6:00 p.m. Opening hours