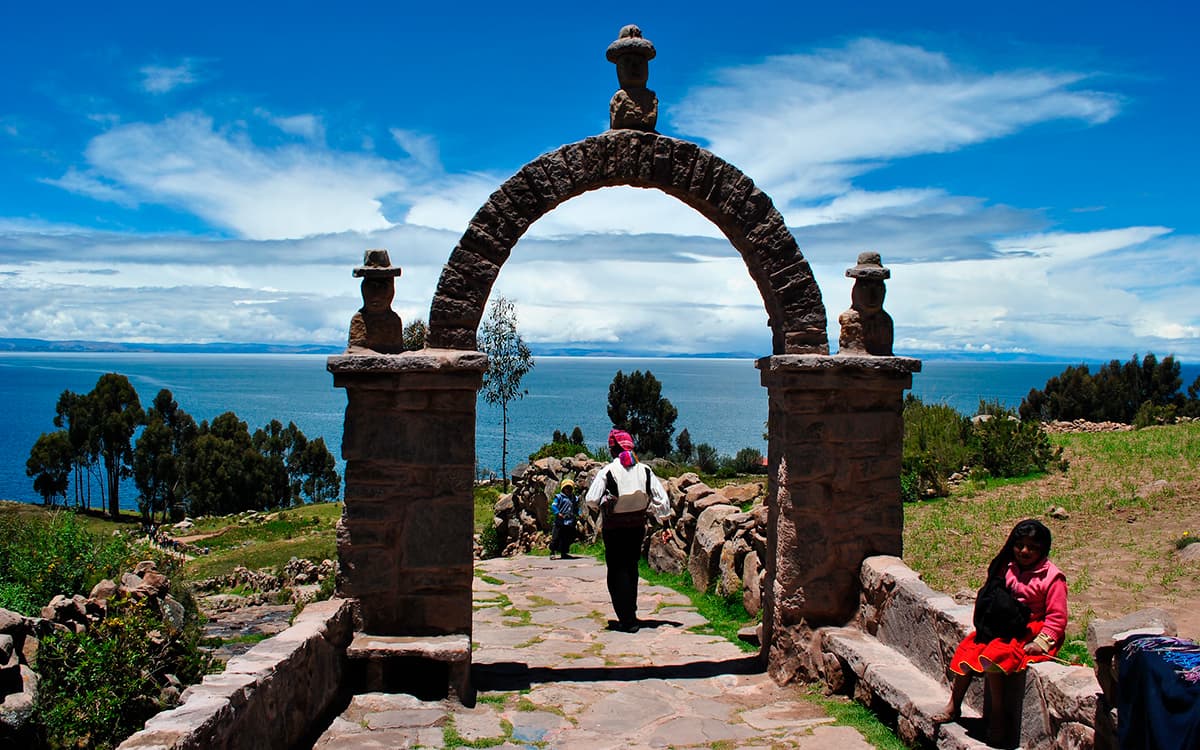 Taquile Island is the largest island in Lake Titicaca, known as the “island of the children of the sun”, 35 kilometers north of the city of Puno. There, tourists can climb a staircase of more than 560 steps to reach the town of Taquile.

The landscape seen from there is incredible. On clear days it is possible to see up to the other shore of the lake. The inhabitants of the town of La Taquile are of Quechua origin and are distinguished by the roots of their customs, traditions and clothes.

This place has rural tourism ventures that allow travelers to spend a few days in the homes of the commoners, to learn local customs.

The nearly 2,000 inhabitants of the place are very welcoming. Despite the tourist activity, the way of life of the inhabitants has not changed one bit. The island knew how to preserve its great ethnic and cultural value, as well as the traditions of artisan work and famous textiles.

Located at 3,950 meters above sea level, with an expansion of 6 square kilometers and 35 kilometers from the city of Puno, is the Island of Taquile, located in the heart of the same town. The Island is famous for being the largest of all the Titicaca islands, it also stands out for its microclimates and the archaeological zones that are still very well reserved from the Inca and Tiahuanaco civilizations, who worshiped the Inti (Sun God) and the Pachamama (Mother Earth).

The island has in the lower part a port made of stones from the same island, in which the boats or rafts that bring passengers from Puno or from other neighboring islands disembark. Then you must undertake an ascent by a staircase of more than 567 steps to reach the town of Taquile. At the top, a spectacular view of the lake and a simple stone doorway await the traveler, welcoming them to one of the most unique communities in Peru. From here you can see almost the entire island and a large part of the lake’s domain, it is the best view on the entire lake route.

Acoording to the history of Taquile Island, the remote bending and activity of the man from the island of Taquile. Well, this is explained by the presence of two pre-Inca archaeological monuments (remains) called: JATUN Q’ARI AND JUCHUI Q’ARI, whose architecture reciprocally submits to the characteristics of the PILLKO KAINA palace, built on the island of the sun, in period III of the Tiwanacota culture, around 1 200 AD, in the period of the transit of the primitive community of slavery.

In the architecture of that time, the structures were not necessarily polygonal and the use of blocks with padded surfaces was abundant.

Ponaski tells us that the unworked stones are supported with clay mixed with lime and stucco…. Its wide-based doors, similar to the Egyptian ones, are a style combined between the Tihuanaco and the buildings of Cuzco.

The existence of man on the island of Taquile, although it can be traced back to the year 1500 BC. d.c. Ponce Sanjines corroborates that in the urban Tiwanaco stadium (periods III and IV) it reproduces an event that can be described as an urban revolution .tiwanaco .from a village it becomes a city with the socio-economic consequences that this implies. Tiwanaco culture, established their colonial enclaves in southern Peru and northern Chile, which they later used as the basic points of their subsequent expansion.

During the period of the transit from slavery to feudalism, the island of Taquile, that is to say, under the name of the Tahuantinsuyo empire and the aegis of a state governed by a noble-slave noble, was the object of occupation and doubling by a special category of the population called MITIMAES OR MITACUNA.

Acoording to history, the Taquile Island was one of the last Inca sites that capitulated to the Spanish in the 16th century. Later it was taken in the name of Emperor Carlos V and finally passed to the court of Pedro Gonzales de Taquila, from whose surname it derives its name. The Spanish banned traditional Inca clothing, so the islanders had to adopt the peasant clothing that they still wear today.

Here we mention 5 interesting facts of Taquile Island that you didn’t know:

Taquile Island has about 1,500 inhabitants who live from agriculture and the weaving of alpaca wool.

The fabric plays a central aspect for the inhabitants of the island. In fact, a man who does not know how to weave is considered to have no future. Women weave the husband’s dress before marriage and among the weavings express their family wishes.

The textile art of Taquile has been on the UNESCO Intangible Cultural Heritage of Humanity list since 2005.

A curious fact about the inhabitants of Taquile Island is the symbolism of their clothing. The chullo, a hat worn by men, indicates whether they are married or single. In addition, in the fabrics of their belts are engraved the cycles of cultivation and ritual activities.

The remains of the island date from pre-Inca times and can be seen in the upper part. During the colony and until the early years of the 20th century, the place was used as a political prison, but as of 1970 the island became the exclusive property of the locals.

The most impressive thing that can be observed on this island, is formed by nature who has been generous with the island as it has given it a varied wild vegetation, which has been enriched with eucalyptus and cypress trees brought by man in the decade of the ‘ fifty. These species adapted to the climatic conditions of the region. In the waters that surround Taquile, the reeds grow and on the slopes, the grass known as ichu that is used both for feeding the sheep and for making the roofs of the houses.

The trips in small reed boats around the island is really impressive.

Lake Titicaca is the second most visited tourist destination in Peru after the city of Cuzco. Also the second largest lake in South America. The lake borders on its left end with Bolivia and its main attractions are the natural islands near it. Even from the lake you can see Bolivia.

Taquile Island is one of the natural islands near Lake Titicaca and offers a paradisiacal setting, with incredible views and a very picturesque rural environment that changes the way of seeing the life of the inhabitants who visit it.

On Taquile Island there are no hotels or cabins or hostels where to stay. The charm of this island lies in the fact that the same settlers prepared their houses so that tourists can spend a few nights there. Similarly, there is no restaurant either, the hospitable islanders open their kitchen and invite visitors to eat in their own dining rooms, while they share anecdotes, customs that characterize their day to day on the island and the best recipes that characterize their particular gastronomy. . The best stories are offered by its inhabitants and you can share them with them during dinner.

The tours they offer are generally two days. Some people choose to go just one, arrive very early in the morning, and return after sunset. But if you decide to stay and share a night with the locals, you will have the opportunity to gain a privileged insight into their lifestyle, beliefs, jobs and social dynamics.

At the top of the island is the archaeological center where you can appreciate the best views of the coast. If you find out which side the sun sets, you can also enjoy a sunset worthy of a postcard or travel notebook.

The only way to get around the island is walking, on the island you will not find paved roads or cars. The way of life of the Taquileños is totally rural and guided by their ancestral customs. Taquile Island is located at 3500 meters above sea level, so it is recommended that you travel it calmly. Its extension is not greater than 7 kilometers, but being located in such a high area, oxygen tends to be more scarce than in a lower place

If you want to visit the beach, you must follow the stone path that passes right in front of the only school on the island. Here the coast of Isla Taquile offers a landscape of transparent waters and very clean blue waters and soft sands. If it is true that the water on the beach is a bit cold, but the sun helps you stay warm. It is the perfect contrast.

Also, while you walk around the place, you usually come across local celebrations on the way. The inhabitants are very friendly and often invite tourists to join in the celebrations, while encouraging them to share the typical coca leaves. In the town square it is also common to find celebrations that involve the typical dance of the Taquileños and a very colorful and elaborate typical costume.

The custom of weaving in Taquile is intimately linked with the personal identity of each inhabitant of the island. Here everyone knows how to weave, the practice is an art that has been spread from generation to generation for centuries. All islanders learn to do it from a very young age.

One of the most deeply rooted customs on the island is that of weaving. In Taquile there is a very particular personal dress code. Both men and women weave headbands, belts and hats. If you visit this island you will have the opportunity to choose between countless designs to take as a souvenir of your trip to this peculiar tourist destination in the south of Peru. If you go to Isla Taquile during the carnival season, you can enjoy colorful costumes and picturesque celebrations that celebrate one of the most interesting and ancient pre-Hispanic cultures.

However, the place is not recommended for those who want to enjoy a vacation in destinations with all services included, wifi and swimming pools. On Taquile Island you will be able to live an experience of disconnection and immerse yourself in a totally different culture that broadens knowledge and raises awareness about the lifestyle and vision of one of the richest and most interesting pre-Hispanic cultures on the American continent.

To get to this paradisiacal island, the boats set sail from 7:00 am from the port of Puno. The journey lasts approximately two hours and when disembarking the path on foot takes about 30 minutes.

A complete package to Perú includes a visit to Lake Titicaca, Taquile Island, inca trail to machu picchu, and the most visited rainbow mountain peru tour.