The Cathedral of Cusco 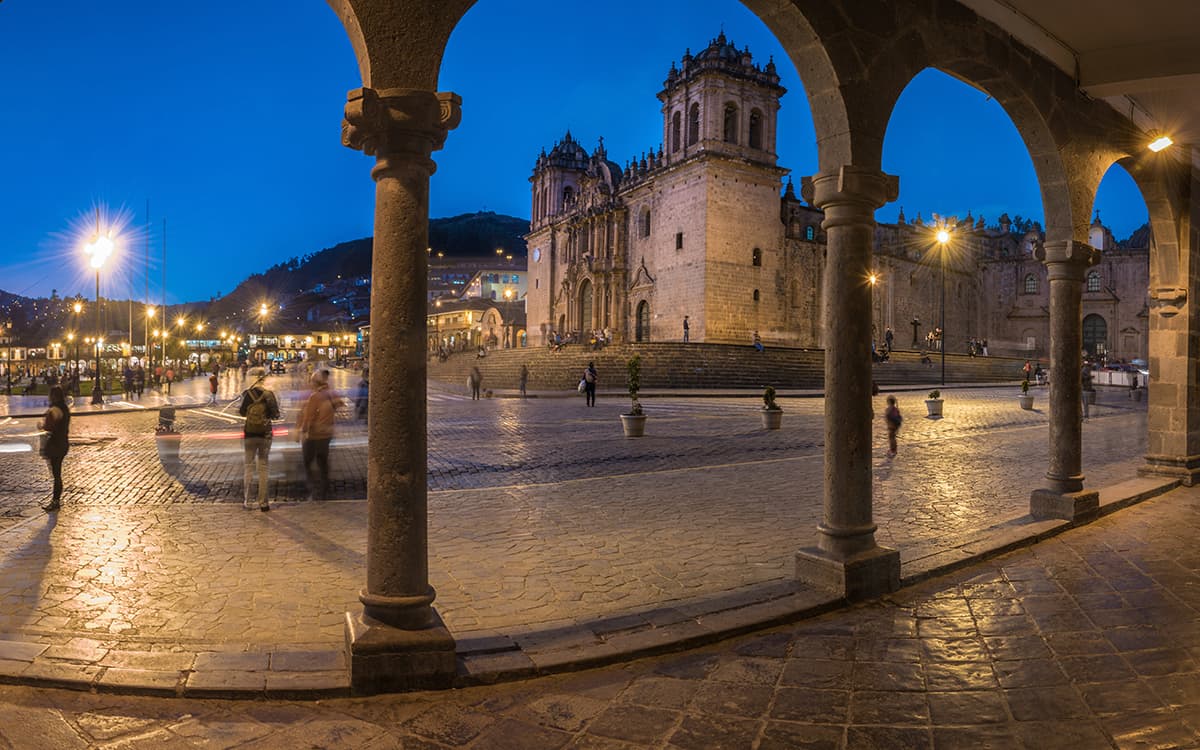 The Cathedral of Cusco or Cathedral Basilica of the Virgin of the Assumption is the main Christian temple and religious monument in the City of Cusco, Peru.

It is located in the northeast sector of the current Plaza de Armas.

The Cathedral of Cusco was built in the place where the Suntur Wasi was, the Palace of the Inca Viracocha.

According to history, the Great Plaza of Cusco was surrounded by Inca palaces built to house their panakas or royal families. One of them was the Kiswarkancha belonging to the Inca Viraqocha. The construction had on its eastern side, a circular building called Suntur Wasi, a kind of house of arms and shields. At present on these two original constructions are the Cathedral of Cusco and its two minor churches.

In the period of the conquest, the Ecclesiastical Council of the city ordered the demolition and transfer of the Andesite stones from the main walls of the Sacsayhuaman fortress to use them in the construction of the cathedral, built between 1560 and 1664.

Although the work was designed and supervised by Hispanic architects and priests, it was executed with the work, sweat, tears and blood of the Incas.

The Cathedral of Cusco is located on the north side of the Plaza de Armas, in the historic center of the city.

Well, this comes to me highly, existing, among the regions recently discovered under the auspices of the ever-august Roman Emperor, our much loved son Carlos, who is at the same time King Castilla, León and Aragon, existing a region called Peru. whose inhabitants are aware of the divine law, and in which region, many Christian Indians dwell; and wishing Charles himself emperor and king with religious affection, that in the aforementioned region of Peru, subject to his mandate, the cult of that glorious name (Christ) of whom is the entire universe, and all its fullness and everything in how much in it exists; may its inhabitants be led to the light of truth and the salvation of souls spread; and also wishing that the town of Cuzco located in the same region where there is already a Church under the title of Santa María, be elevated to the rank of City and Diocese and the former Church of Santa María to Cathedral Church.

Acoording to the history of Cusco Cathedral, itis the result of various projects elaborated by different architects who took charge of the works. The first cathedral in Cuzco is the Iglesia del Triunfo, built in 1539 on the basis of the Viracocha Inca palace. At present, this church is an auxiliary chapel of the Cathedral. The Cathedral of Cuzco, like that of Lima, is a temple with three naves with two more chapels and a flat front. (…) The three naves are of equal height, as in the cathedrals of Lima and Jaén. The latter was the immediate precedent for the two Peruvian cathedrals.

Between 1560 and 1664 the Cathedral Basilica of this city was built. Its construction was entrusted to Juan Miguel de Veramendi in 1560, who was replaced two years later by Juan Correa. This was followed by other teachers, until in 1615 Miguel Gutiérrez Sencio, an architect who followed Marco Vitruvio and Jacopo Vignola, and admirer of the sober and pure style established by Juan de Herrera in El Monasterio de Herrera, took over the direction of the work. The Escorial. Under his direction, the Cuzco Cathedral was completed in 1649.The construction material was stone from nearby areas and red granite blocks were also reused from the fortress known as Sacsayhuamán. It was recognized as a minor Basilica of the Catholic Church, on February 8, 1928. The construction, with three naves, stands on a hall-type floor plan. A surprising detail is the fusion between the order of the capitals and friezes and the type of roof used: the ribbed vault, characteristic of the Gothic. This gives rise to a surprising amalgam of styles, frequent in the Baroque style of Latin America.

The famous image of the Lord of Earthquakes is venerated in the cathedral. This cathedral, with a Renaissance façade and Baroque, late-Gothic and Plateresque interiors, has one of the most outstanding examples of colonial goldwork. Also important are its carved wooden altars.Since in this city the painting on canvases of the famous Cuzco School of painting was developed, the most important of Colonial America, in the cathedral you can precisely see important samples of local artists followers of this school.

Construction in the shape of a Latin cross and with a Renaissance-style facade and interior, in it are the best expressions of colonial goldsmithing, as well as a valuable collection of canvases from the Cusco School. Due to the period in which it was built, it inherits in its construction the Gothic-Renaissance of the great Spanish Cathedrals, adding the Baroque style represented in its large altarpiece portal and monumental towers.

Architecture of the Cathedral of Cusco

Rectangular in shape of the basilical type, the Cathedral of Cusco has three naves: nave of the epistle, nave of the gospel and the central nave, which coincide with the three doors on the façade. It also has fourteen cruciform pillars that define the distribution of the twenty-four entrance vaults and that of the transept.

The High Altar is made entirely of silver, the Sacristy is made up of forty canvases of the Bishops and Archbishops of Cusco. Next to it there are two auxiliary chapels, on the right side the El Triunfo church and on the left the Sagrada Familia.

Entrance Fee to the Cusco Cathedral

Prices of the Entrance Fee for the Cusco Cathedral

From Monday to Sunday, from 10 in the morning until 6 in the afternoon.

The Religious Circuit Ticket (CTR), is administered by the Archbishopric of Cusco, allows you to enter four important religious-themed destinations in Cusco such as: The Cathedral of Cusco, Temple of San Blas, the temple of San Cristóbal and the Archbishop’s Palace (currently under maintenance)

The religious circuit ticket allows you to know the most impressive expressions of religious art from the colonial era, such as paintings and sculptures that portray the reality of the time and the imagination of artists influenced by the fusion of Inca and Spanish culture.