The Lord of Miracles in Perú 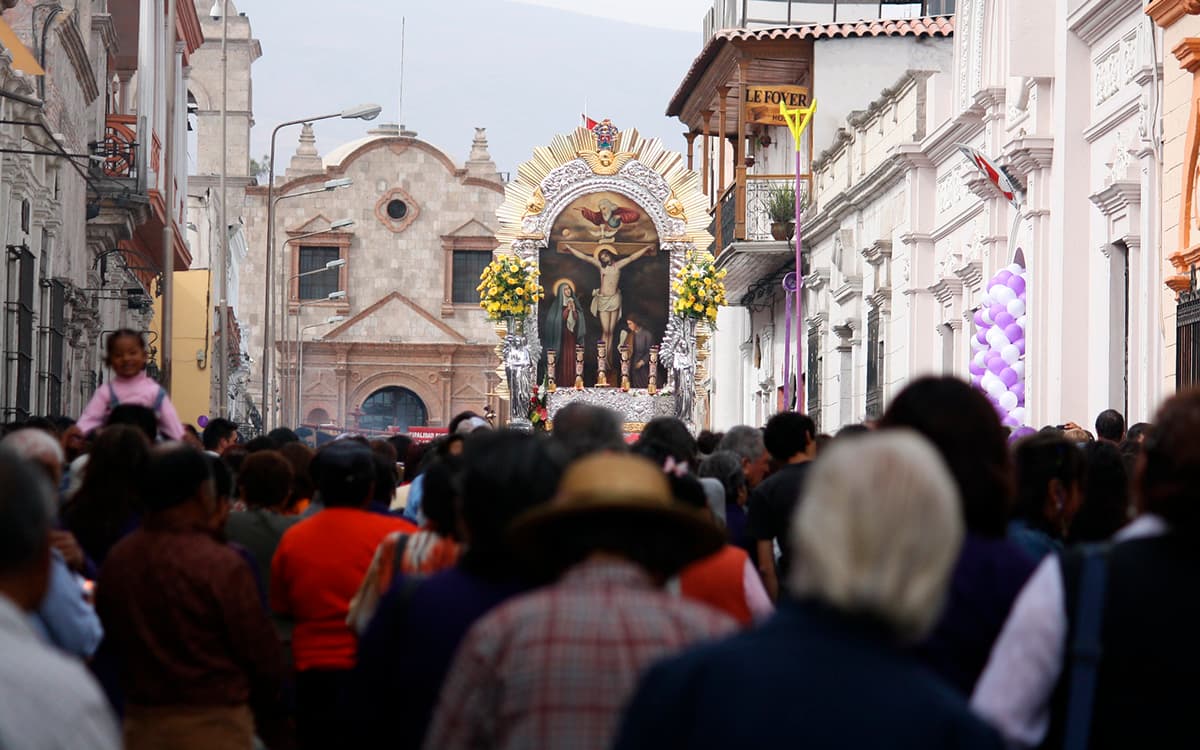 Also called, Cristo Morado or Cristo de Pachacamilla, it is an image of Christ on the cross, painted on an adobe wall located in the Main Altar of the Las Nazarenas Sanctuary in the city of Lima and venerated by Peruvians and foreigners in Peru and around the world, by whom it is considered miraculous. Its procession is a purely Peruvian tradition, considered the largest periodic Catholic religious manifestation in the world.

Currently the procession of the Lord of Miracles, runs through the streets of Lima every year in the month of October since 1687, bringing with it blessings of union, hope, Catholic fervor and tradition to all the devotees of Christ of Pachacamilla.

Perú Dresses in Purple to Venerate the Lord of Miracles

Every October, a sea of ​​people invades the streets of downtown Lima to show their fervor to the so-called “patron of all Peruvians and foreigners.”

Thousands of people mobilize to meet the miraculous Christ to fulfill their orders during this holiday.

The streets of the Inca territory are dressed in the representative color of this Catholic figure: purple. They are filled with smells through incense, flavors (Doña Pepa’s Turrón, picarones or anticuchos) and, above all, a very great spirituality.

History of the Lord of Miracles in Perú

The history of this image of Jesus Christ goes back to the time of the viceroyalty, when evangelization was in full swing, so both indigenous and slaves were allowed to meet for worship purposes.

In 1651, an Angolan slave painted the image of a crucified Christ on one of the adobe walls of the farm where he worked, in Pachacamilla, without having notions of painting or art.

The painting was gaining popularity among the slaves when small miracles were attributed to it, thus promoting the first religious brotherhood.

In 1655 the image showed its power. After a strong earthquake that shook Lima and Callao, a good part of the infrastructure of the time (temples, mansions, houses) collapsed, including the farm where the painting was located.

To everyone’s surprise, the only structure that remained standing was the wall that had the Christ. Since then, this image attracts devotees, who gather around it until late at night.

The authorities of the time decided that the image should disappear and, in 1671, they sent a committee to erase the painting.

However, each of the characters who tried to do so was repulsed or was the protagonist of some miraculous event; so the viceroy decided to build a hermitage around the image.

In 1687, another seismic phenomenon was felt in Peru, collapsing the hermitage around the Lord of Miracles, but his figure remained standing. This is why it was ordered to make a copy of the oil image and take it out in a procession through the streets of Pachacamilla.

This event happened in October, so this month was chosen to celebrate Cristo Moreno.

Festival of the Lord of Miracles in Perú

Participating in this festival, either within one of the many brotherhoods that show their devotion or as a parishioner, is an indescribable experience.

The figure comes out four times in October, and the fixed dates are October 18, 19 and 28, as well as November 1.

The Christ of Pachacamilla leaves in procession from the first Saturday in October, where he leaves his permanent residence, the Monastery of the Nazarenas, and spends a day in the Cathedral of Lima.

From there, he returns to his place of origin until October 18, where he leaves on a litter and is received with tributes by different State agencies (the Municipality of Lima and the Government Palace), while visiting several churches in the capital city center.

On Monday, October 28, he will make his usual tour of the center to visit, as is tradition, the patients of the Arzobispo Loayza Hospital and the San Bartolomé Hospital. Later, the figure will return to the Las Nazarenas Monastery after midnight.

The final tour, which ends the purple month, takes place on November 1.

During this day, the Lord of Miracles leaves the church in procession through the block and a night mass is celebrated to put the canvas back inside the Sanctuary of the Nazarenas until the following year.

Curiosities about the Lord of Miracles in Perú

Some historians emphasize that this devotion derives from the cult of the god Pachacámac, who was also associated with tremors. Pachacamilla is the place where the indigenous people of Pachacámac arrived under the Spanish yoke and, living in this area, they still paid tribute to this God.

“Christ of wonders”, “Lord of Miracles”, “Cristo Moreno”, “Christ of Pachacamilla” and “Lord of tremors”; are some of the names given to the figure of Jesus Christ on the cross.

The oil that comes out in procession has been restored several times. In 1671, to the original painting, which was a copy of the one made in stone, two other figures were added: a Virgin and Saint John. Then the Holy Spirit and God the Father are added, thus creating a Holy Trinity.

This celebration has been declared Intangible Heritage of Peru by the Ministry of Culture in 2005, since it brings together the integration of various cultures (Afro-Peruvian, Andean and Spanish-Creole), becoming an unprecedented national tradition.

The purple habit is due to his relationship with the Nazarene Mothers (devoted to Jesus Nazareno) and, by mysterious ways, the blessed ended up taking care of the effigy of this Christ in Pachacamilla.

The Virgin of the Cloud is the faithful companion of the Lord of Miracles. Her representative canvas comes out and accompanies Christ in her procession since October 20, 1747.

During the month of October, the purple habits, the incense, the candles, the nougat of Doña Pepa and other elements; they become part of Lima’s commercial life, representing an increase in the local economy.

Festival of the Lord of Miracles: Main Cities of Perú to Visit

This festival is based in Lima, because the first manifestation of the cult arose there. In addition, he has been the patron saint of the city since 1715.

In other places in the interior of the country such as Cusco, Arequipa, Trujillo, Huancayo, Ayacucho, Piura, Lambayeque, among many other locations, the celebration is very relevant.

Next, we will show you three cities where Cristo Moreno is honored in style:

This is the main venue for the celebration of this tradition. Many devotees travel from the interior of the country to Lima and accompany the original image during its procession.

Everything that this holiday implies begins much earlier than the regular congregation knows. There are hundreds of people working in the brotherhoods, crews and brotherhoods to accompany the image during the days of celebration.

Among the honorary brothers, the singers and the incense women; The more than 5000 members of the Brotherhood of the Lord of Miracles of Nazarenas are in charge of adorning the litters of Christ of Pachacamilla and of Our Lady of the Cloud.

The litters carry jewelry, lights and flowers that adorn the entire structure, which weighs approximately 1,400 kilos and is carried by 32 people, guided by the honorary brothers.

In front of her go the incense sticks, who clear the path and leave the perfumed path for the Lord of Miracles.

The singers surround the image and accompany the procession with their liturgical intonations. During the festivity there are typical dances, songs and even fireworks.

In Cusco City there is also a replica of the Señor de los Milagros, created in 1945.

Although the city’s “Sworn Patron” is the Lord of the Earthquakes (a Christ dating from 1620), in October they also celebrate the procession of the figure of Christ of Pachacamilla. This image is in the Temple of San Francisco de Asís, in the center of the city.

During his second departure, on October 18, the Christ is received in the Cathedral of Cusco and, during his journey, he is the protagonist of multiple tributes. He also visits various hospitals, such as the Regional Hospital.

One of the most striking aspects of this celebration are the songs in Quechua that accompany the procession. Also, on one of his outings, he visits two markets that are blessed with his presence, reminding a little of the blessing of the land by the ancient gods.

In Arequipa, the celebration of the Señor de los Milagros begins in September, because its first procession is on October 1st. The image travels the streets of downtown Arequipa six times.

This cult began in 1950, when a canvas painted in Lima was presented to the faithful of Arequipa at the request of some notable ladies who already professed the cult of Cristo Moreno.

From that moment, the image rests throughout the year in the Temple of San Agustín, accompanied by the canvas of Our Lady of the Cloud.

Unlike Lima or Cusco, this painting is not adorned with jewels or quirky items.

The main tribute focuses on the handmade carpets, made of flowers or colored sawdust, that the faithful devotees, from institutions to business owners, perform throughout the processions.