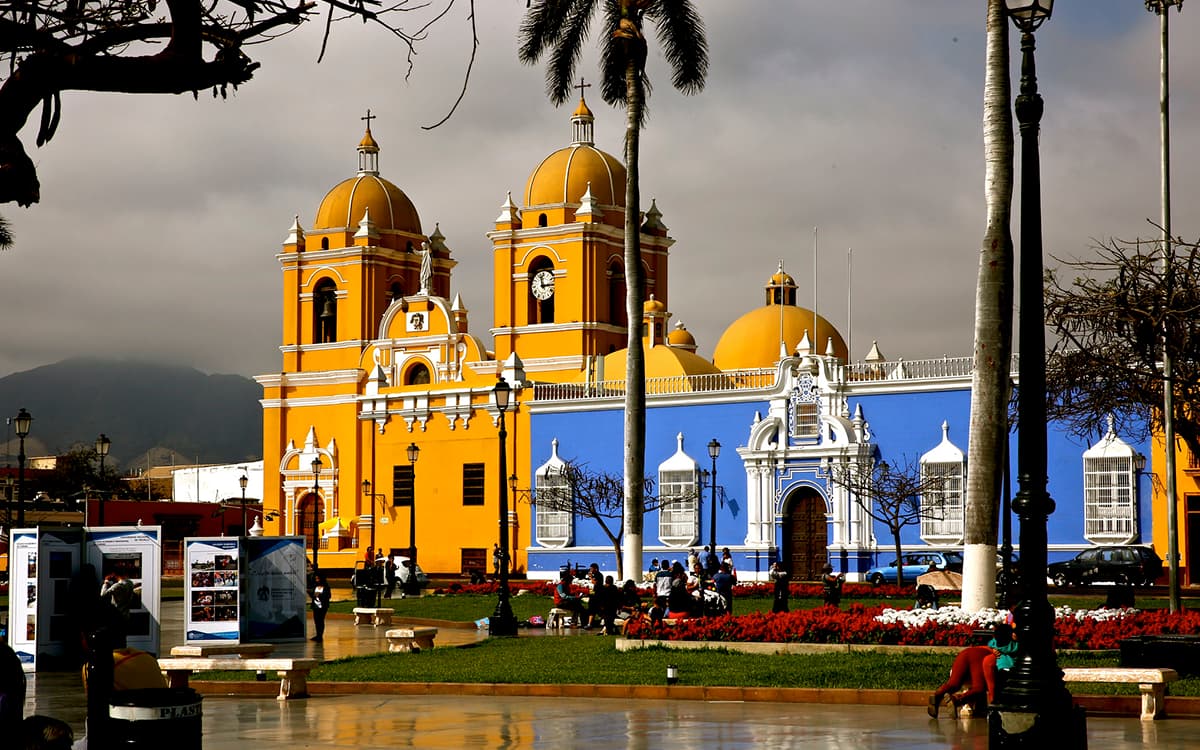 Trujillo in Perú is, the Capital of the Department of Liberty, “Capital of Eternal Spring” and, it is the third most important city in Peru, due to its great economic and cultural importance; It has the most productive valleys in the country, which has allowed it to develop economically. The agricultural industry is the most important activity in this part of the country, standing out in the production of sugar cane, asparagus, and the shoe factory. It is the first producer of sugar cane and second in rice production in the country.

From its past it still preserves very important archaeological remains. It was the seat of two important Cultures; Mochica and Chimú, each one standing out for the fineness in their work in gold, silver and ceramics. Among many testimonies there are those of Chanchán and Huaca de la Luna y el Sol, located in the city of Trujillo, the cemeteries of Cupisnique and the el brujo complex in the province of Ascope, among other sites of importance.

On December 6, 1,534 it was founded by the conqueror Diego de Almagro, on behalf of the governor Dn. Francisco Pizarro, thus becoming one of the most important cities of the viceroyalty. Emperor Carlos “V” granted it the title of city by means of a royal decree of November 23, 1,537, and on December 7 of the same year, he granted it his coat of arms with the title of “Nobilísima” city of Trujillo. And in 1,678, the city of Trujillo was surrounded by a gigantic wall, by Viceroy Melchor de Navarro, in order to protect this city from pirates and corsairs.

Colonial and republican convents, houses and mansions are still preserved from the Spanish past. Among its main attractions are the citadel of Chanchán, the Plaza Mayor de Trujillo, the archaeological remains of the huacas of the sun and the moon, and colonial houses, convents and churches. Trujillo has the privilege of having magnificent beaches such as Las Delicias, Salaverry, Buenos Aires, and Huanchaco respectively, ideal for practicing the Hawaiian board.

Since the discovery of the Lord of Sipán there has not been an archaeological find as important as the one we have today, the first ruler of ancient Peru, La Señora de Cao.

A bale weighing just over a hundred kilos, buried about 1,700 years ago, concealed one of the most exciting chapters in Moche history.

The tomb of the Lady of Cao has been found in the huaca of Cao Viejo, located in the Archaeological Complex of El Brujo, which rises in the Magdalena de Cao district, in the department of La Libertad.

The funerary bundle weighed about 100 kilos and measured 1.80 meters high, so it was originally thought that it was a male ruler.

The Lady of Cao, as the discovered mummy has been baptized, has magical-religious tattoos of snakes and spiders; both on her hands and on her legs and face.

The ruler’s trousseau is made up of necklaces, diadems, crowns, two scepters and 31 beautiful nose rings that reinforce the idea of ​​her power.

Among the cultural heritage of the city of Trujillo, the following stand out:

The church of the Company, of the XVII century; The Cathedral of Trujillo, built between 1647 and 1666 and the church and / or monastery of El Carmen, a valuable architectural-artistic ensemble of viceregal art.

Also in Trujillo Perú we will find the ruins of the pre-Inca city of Chanchán, located west of Trujillo, the huaca of the Sun and the Moon among some more.

On the orders of Diego de Almagro, Martín de Astete drew this square as the center of the city. In the main part of the Plaza Mayor you can see the Freedom Monument, a baroque marble sculpture, the work of the German Edmundo Muller.

Main Square of Trujillo in Perú

Built in 1666, it preserves valuable works of art. Especially paintings from the Cuzco and sculptural school.

The only temple with gem towers that preserves the portrait of the Virgin of the Rosary.

Intersection of Almagro and Ayacucho streets.

Its construction began in 1680 and ended in 1708. It was built with adobe, brick and quincha. The front of the façade is marked by two towers with three-angle pilasters. Inside, the arches, pilasters and pillars respond to the Trujillo tradition of the seventeenth century.

This old square marks with its imposing doorway the way to the mountains. It was restored in 1986 and there is the old pool that originally stood in the Plaza Mayor. There you can see the water box that fed the lots in colonial times.

Built in 1759, it is one of the best architectural complexes in the city. It is made up of a temple and a convent with two cloisters.

The gallery houses an important collection of approximately 150 canvases, most of them from the 17th and 18th centuries; Especially noteworthy are canvases from the Quito and Flamenco schools.

It dates from the 17th century. The main altar is made of gold leaf and the pulpit is baroque.

It dates from the 18th century. In Baroque style, the main altar, the polychrome altarpieces and the pulpit stand out. Characters from the Holy Scriptures and passages from the lives of some saints stand out in the decoration. At present, the Colñon Theater works in what was the convent.

Originally built in 1536, it was destroyed by an earthquake in 1619 and rebuilt in 1634. The architectural complex, unlike its similar ones in the city of Trujillo, was built in the central part of a block and not in a corner as is common in this type of monuments.

Its main façade is in the Baroque style and instead of bell towers it has a pair of cattails. It has works of great value such as the main altarpiece (which originally belonged to the Church of the Company), and the side altarpieces with paintings from the 17th century.

Built in the 19th century, it is an example of neoclassical civil architecture. The columns, the window bars and the Italian marble statues stand out. It is currently the headquarters of the Central Club.

It has a large main patio and an ancient water well. From the outside you can see its corner balcony in the Mudejar style. In this house a valuable numismatic collection is preserved.

It represents two periods, since it combines viceregal elements from the 18th century and republican elements from the 19th. The façade is characterized by a large wooden doorway and the traditional windows with carefully worked iron bars. Inside you can see cozy patios.

For many specialists it is the most representative of the architectural style of the city of Trujillo. The façade, in a baroque style, is characterized by the use of various shades of colors, its pediment two lions (which is why it is also known as the “House of the Lions Facade”). The style of the house is complemented by Mannerist murals, empire windows and a neo-baroque balcony.

House of the Marshal of Orbegoso

This house preserves the traditional viceregal character, marked by the paved floors, the worked doors and the rooms arranged on a high embankment. In its rooms important collections of furniture, silverware, canvases and mirrors are exhibited. Also, temporary exhibitions are presented.

House of Emancipation or Madalengoitia

In this place the Marquis of Torre Tagle prepared Trujillo’s declaration of independence in 1820.

It was the seat of the First Constituent Congress and later the house from which President Riva Agüero ruled. This house is also called the Civic Sanctuary of Trujillo. Exhibitions are held.

Headquarters of the Central Reserve Bank. It is a neoclassical style house adapted as a museum, where gold ornaments from the Chimú culture, the desk of the Liberator Simón Bolívar and furniture from the viceregal and republican times are exhibited.

According to legend, 800 years ago Prince Tacaynamo landed in Huanchaco with his entourage, founding the first Chimú dynasty.

In its waters still navigate “caballitos de totora”, traditional rafts used by fishermen on the Peruvian north coast since pre-Columbian times. It is one of the favorite beaches on the coast of Peru for lovers of the Hawaiian board.