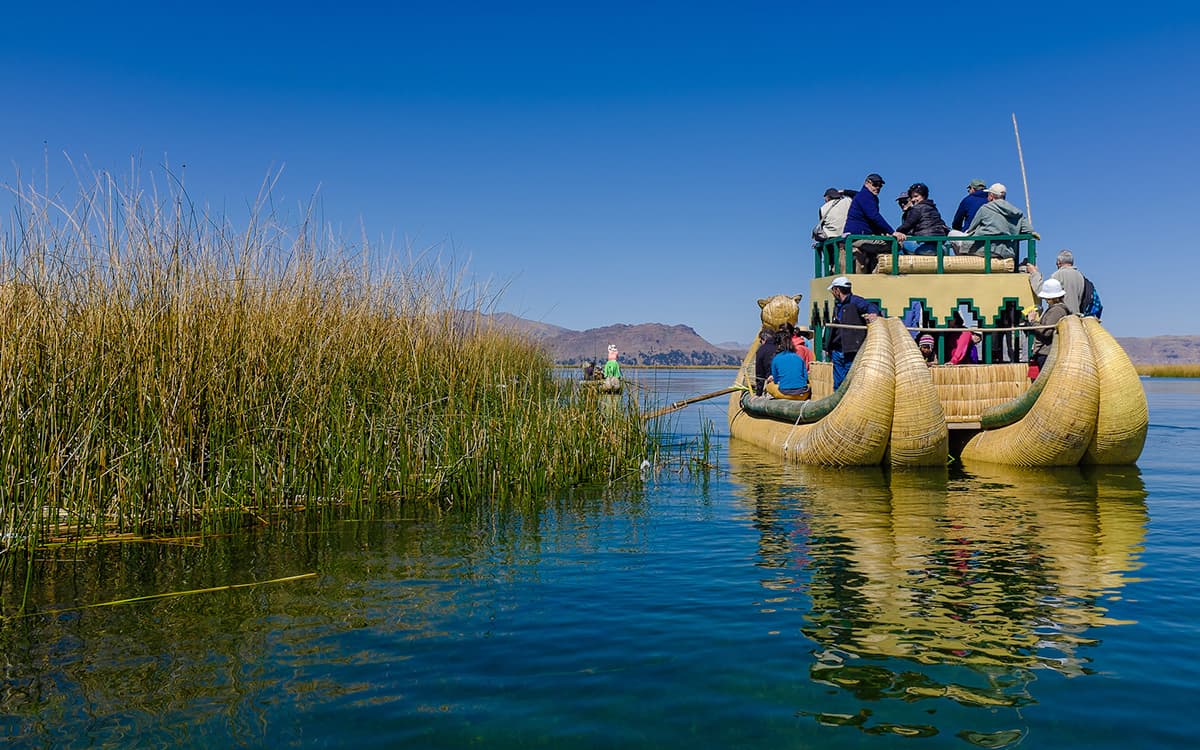 This island is located approximately at 3800 m a.s.l., and is built with reeds, a plant that grows under these cold waters. On the island of Uros, you can see houses, schools and churches also built with totora.

The inhabitants of these almost 40 islands are the Aymara, considered one of the oldest Andean civilizations in Peru, which were forged long before the Incas.

The economy of these settlers is sustained by fishing, the sale of handicrafts and barter.

The distance it takes to get to the floating island of Uros is 30 minutes from the shores of Lake Titicaca.

The floating islands of the Uros in Perú are located west of Lake Titicaca, and northeast of Puno, between parallels 15 ° 50 ‘west longitude of the Greenwich meridian, at an altitude of approximately 3810 masl, 7 km from the city of Fist.

«Uri», which means indomitable, chúcaro, brave, so the Uros were uri urus, that is, untamed, clear and wild men, descendants of an ethnic group called «qapi», whose language was Pukina, now extinct. Currently the inhabitants of the Uros speak Aymara.

What are the floating islands of the Uros

The floating islands of the Uros in Perú are a group of artificial islands located in the Peruvian part of Lake Titicaca.

They were built by the Uros, an ethnic group that predates the Incas from Lake Uro-Uro in Bolivia, who fled to Lake Titicaca to escape the Incas.

To do this, they built boats made of reed, a plant that is found in abundance on the shores of Titicaca, and finally they built their own floating islands.

The Uros group in Perú blocks of reed roots that, when decomposed, produce gases that favor flotation. The blocks are subjected to a drying and weaving treatment and form a layer called khili that covers the islands and on which the houses built with the same material are then placed.

Every ten years, despite maintenance, they start the construction of a new island and abandon the old one.

In addition, each island has an anchoring system made with poles that reach the bottom of the lake so that, due to the action of the wind or the movement of the water itself, the islands do not navigate the lake.

The size of the islands varies depending on the number of families that live there. Between 3 and 10 families live per island.

There is a main island that has schools, churches and community venues, where the inhabitants of the islands move with their traditional boats also built with reeds.

This islands are the best destination in your trip to Perú, as long as the inca trail to machu picchu and the tour to rainbow mountain peru.

How did the Uros make the floating islands of Lake Titicaca?

As I mentioned earlier, they use the cattail in addition to the roots. Not only do they use this plant to build the island, but also their houses, roofs, rafts, among many other functions. Totora is also used as a natural fuel and can even be tasted being quite bland from my point of view.

The Totora, an aquatic plant that grows on the surface of Lake Titicaca, is an essential renewable resource for the life of the Uros, as it is their main construction material, it is usually woven, constituting the roofs, walls and doors of their homes. In addition to their homes, the Uros also make their main means of transportation within Lake Titicaca and between their own islands.

Another of the essential uses of the cattail is that when the stalks dry they can be used as firewood for their kitchens, thus making fuel. They also use this material to create beautiful totora handicrafts, which they sell to help their economy.

Interested visitors participate in the daily activities of the Uros Islands community in such a way that they feel part of it. The inhabitants of these islands teach each one of the visitors the way in which they cut the material for their homes, means of transport, cooking, sailing in boats, fishing and other very traditional customs.

The Uros Islands in Perú undoubtedly contain a lot of history and some customs still alive, traveling and visiting this site will be the best way to learn more about the Uros, in punotours we invite you to meet with us this incredible tourist destination in Puno and Lake Titicaca.

The floating islands of the Uros in Perú are located in the bay of Puno, at an approximate altitude of 3810 meters above sea level.

The area of ​​the floating islands of the Uros has a cold and dry climate, with a maximum temperature of 20 ° C. Being a peripheral area, the lake performs a thermoregulatory function, which allows greater agricultural production in the areas that surround it. In summer, rainfall is accompanied by strong winds and waves in the afternoon. Lush vegetation and sporadic heavy rainfall often cause flooding, while in winter the nights are cold and the sunlight is very intense during the day.

The mother tongue of the Uros is Puquina, now extinct. Aymara prevailed over time and is the most widely used language, along with Spanish. Other original languages ​​are also spoken, such as Uruquilla, Chiw Luschi chun or ma uchun (“Our mother tongue”), which very few old people know today, and which is related to the Chipaya language of the Carangas province of the Oruro department. . Between 1931 and 1938 there were a maximum of 100 Uruquilla speakers, belonging to 30 families on the banks of the Desaguadero River, but from 1950 only a few knew the language. Most of the Uros adopted Aymara and Quechua, thus losing their mother tongue. Some argue that the Uros could also speak the Puquina language in addition to their own, which is why today it has been given the same name, “pukina” even though they are two very different languages. How to visit the floating islands of the Uros

Visiting the floating islands of the Uros in Perú is a very typical excursion in Puno. In fact, the vast majority of tourists who come here are for this reason. You have to differentiate between these islands and that of Taquile. They also offer a combination of both places, although the time is much longer.

We simply opt for the Uros islands in Perú, which is the most interesting. The price may vary depending on the agency where we hire it, but it is economical. For us, after haggling (although not much), it cost us 50 soles (€ 12.5) for 3 people. Pick up at the hotel, excursion to the islands and then back to the hotel.

There in the port we saw a sign where it said that the price for foreign tourists is 10 soles and 5 more than the entrance fee. Therefore, the price was more than good, since we only paid 1.6 more soles per head but we received transfer and we must bear in mind that it was through an agency.

Therefore, visiting the floating islands of the Uros costs from 15 soles per head. If it is done by agency it will always be a little more, but in principle paying more than 25 soles would not be a good price. It is also true that we went in low season and it was not that there were too many tourists. I checked online before traveling and the price was 25 soles.

There are several scheduled tours. They offered us one at 7:30 in the morning, another at 12 and then there was at least one more at around 2:00 p.m. We opted for the 12 o’clock one. The whole excursion lasts just under 3 hours. If we had chosen to also go to the island of Taquile, it would have been about 8 hours, since it is much further away and there is also a stop to eat.