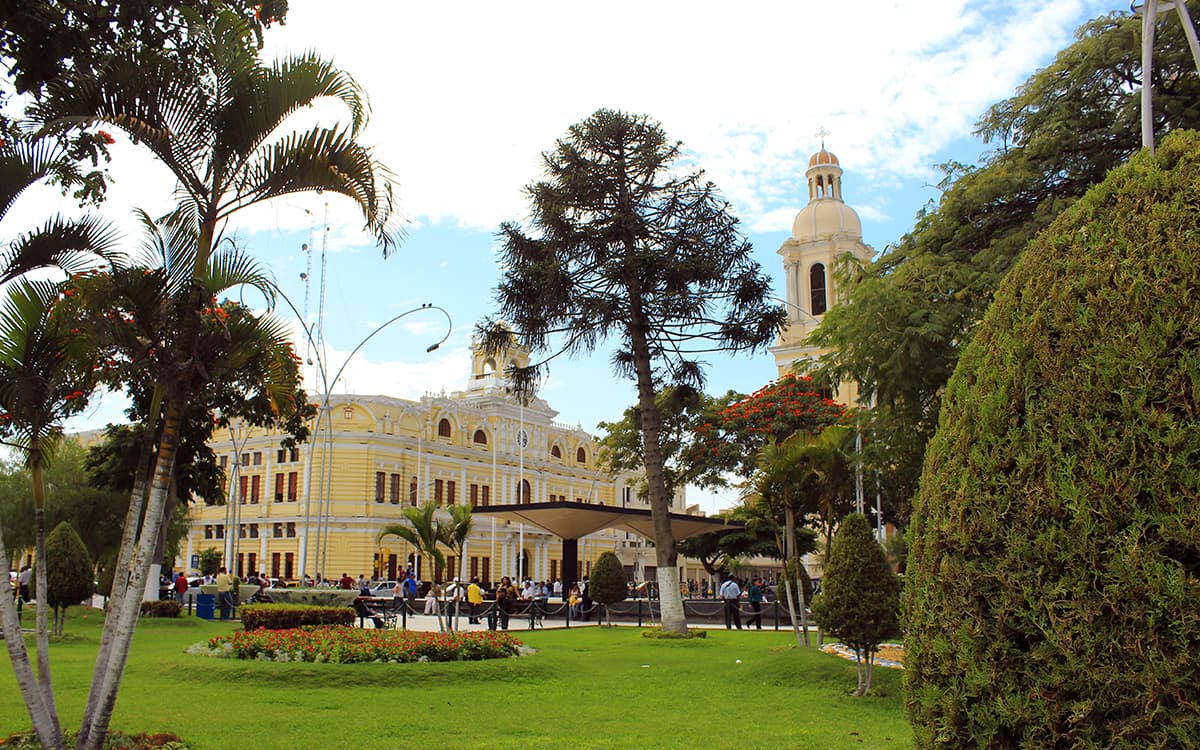 The Peruvian coast has the shape of an extensive desert lying in the mountains. And it is precisely the presence of the Andes to the east, together with the cold Humboldt current that reaches its beaches, which gives the area that arid and dry characteristic, from the Sechura desert to the Nasca pampas and the desert of Atacama that is sporadically interrupted by valleys in which a dense layer of clouds covers the skies and light drizzles are frequent in winter.

Due to the humidity prevailing in these areas, there is a slight sensation of cold, although the temperature rarely drops below 12 ° C. During the summer, on the other hand, the sun shines brightly and the temperature frequently reaches 30 ° C.

The central region and the southern region of the Peruvian coast have two well-marked seasons: one winter, between April and October; and a summer one, between November and March. The maximum monthly temperatures usually occur in February, between 24 and 33 ° C; the minimum between 15 and 18 ° C, in July. Rainfall varies from 132 millimeters per year to almost nothing.

The northern region of the coast, for its part, does not suffer the effect of cold waters, which translates into almost 300 days of sunshine and warm temperatures throughout the year (up to 35 ° C in the summer). The rainy period occurs between November and March and rainfall in the summer, without the presence of the El Niño phenomenon, is less than 100 millimeters.

Another characteristic of the literal climate is the low temperatures of the surface of the sea and the air; the absolute lack of rainfall or small precipitations, with its drizzle in the winter months and the marked aridity of the coastline in contrast to the abundance of fish, presents a climatic complex that bears a lot of resemblance to that of the west coast of Africa or Baja California.

Due to the low temperatures of the sea, a layer of cold air is formed that extends from the surface until reaching 900 meters in height, preventing the normal temperature that corresponds to our geographical latitude and that exists above the mentioned atmospheric layer from reaching up to the surface.

Another of the most outstanding characteristics of the weather in Perú coast is its roof of clouds that covers it with gray stratus clouds, which despite not having openings, can pass the sun’s rays. The weather in Perú coast is usually cloudy, since it remains without sun for weeks on end, covered by that dense layer of clouds that extends from the coastline and penetrates between 100 and 200 miles out to sea. This is due to the hot air carried by the SE trade winds. Towards the coast, when passing through maritime zones with low temperatures, they condense the humidity it contains in the form of clouds. When flying over the coast, at heights greater than a thousand meters these cloud covers are perceived.

The clouds that cover our coastline are suspended between 200 and 800 meters. of height where they dissolve, above the last altitude the blue and clear sky appears; these clouds reach their maximum thickness in the winter months.

The thick mists that arise over the sea, at low altitude, make it difficult for ships that lack radar to navigate and have often caused collisions. These fogs are caused by the hot air that comes into contact with the cold surface waters of the sea in the outcrops produced by the Peruvian Current, giving rise to denser and more frequent fogs in the summer months.

Both the formation of clouds and mist are manifestations of a high percentage of humidity, which on the coastline reaches values ​​of the order of 90% to 95%. This humidity that can be perceived in the environment has its visual expression in the sunsets, where the sky is dyed in a varied range of colors with splendorous tones that start from purple gold to light green.

This iridescence and the intense red color of the sun in the twilight hours, are classic manifestations of the humidity that is in suspension in the air.

The prevailing wind on our coast is the trade wind, which usually has a S., SE direction. and SSE., whose origin is attributed to the effects that occur in the high-pressure zone of the South Pacific. Our coast is also exposed to local winds known as the “virazón” and the “terral”, which are actually breezes of significant values ​​that periodically change direction.

During the day the breeze flows from the sea to the land, that is, from the coldest to the hottest areas, that is, from the highest to the lowest pressure; it is the virazón that is felt from 11 in the morning and declines at sunset. In these evenings the temperature differences are reversed and the sea is colder than the earth’s crust of the coast, giving rise to the terral or night breeze that blows from the land towards the sea.

The “paraca” is a local wind of strong intensity that originates in the vicinity of the Paracas Peninsula, Pisco, which begins to make its effects felt a little before noon. It reaches its greatest strength, more or less, at 5 in the afternoon and is caused by the effects of the atmospheric pressure differences from the heating of the sandy deserts located between Lomas and Ica.

On the north coast, between Puerto Chicama and Cabo Blanco, a very similar wind blows. On the other hand, in the central and southern coastal zone of our coast there are only winds of little significant value, considered as mild.

Weather in Lima Perú by month

When to go to Lima?

For the visit of Lima and the entire Peruvian coast, the best period is the months of October to April. Among these, the months between December and April are excellent, which are the sunniest months and those in which the city is often free of the cold fog that covers it for the rest of the year.