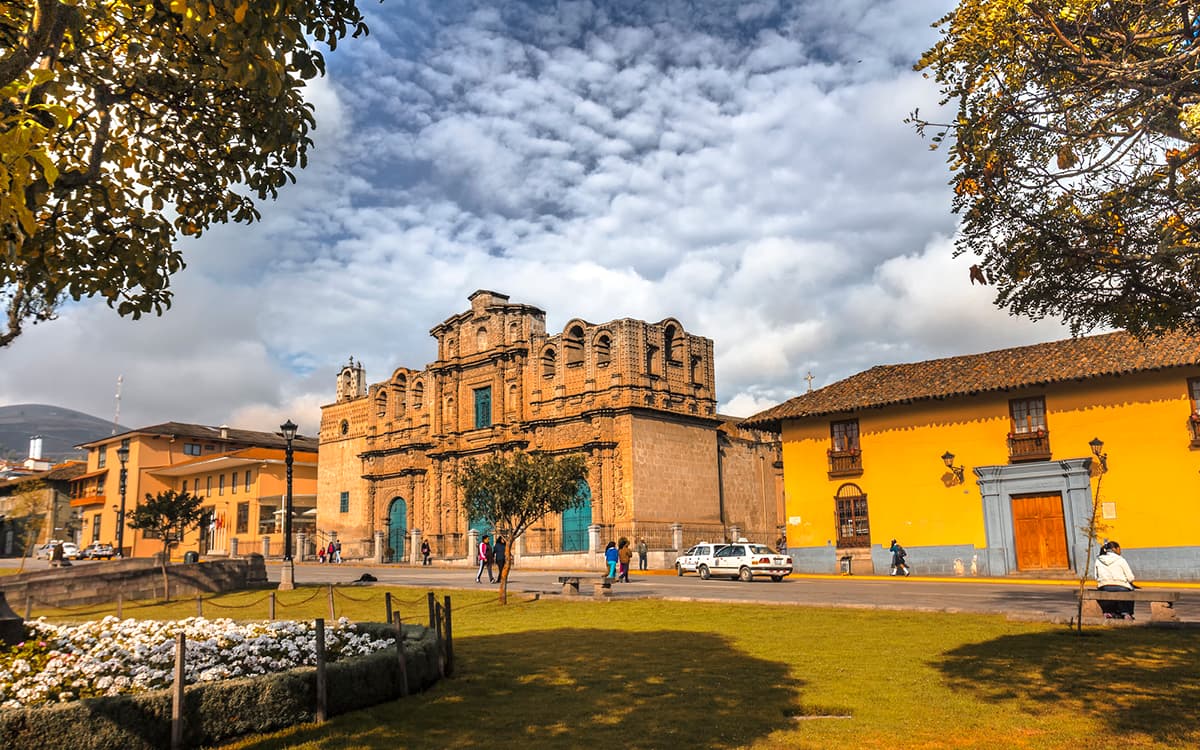 Cajamarca region was the scene of the capture of Atahualpa in 1532, during the conquest of Peru. In the colonial years it maintained the category of town until December 19, 1802, the date on which it was established as a city and received its coat of arms. It is said that it is the most Spanish city in Peru due to its aristocratic colonial buildings.

Located at 2,750 meters above sea level, Cajamarca region is the lowest area of ​​the Andes and the most eroded of the mountain range. His fertile lands have allowed him to use the landscape as a canvas to capture an admirable painting.

It has more cultivated soils than other cities, which is why it has the valley with the largest planted area in the country.

The churches of Cajamarca are among the beautiful in America, many of them do not have towers or show them truncated. Another must-see attraction is the Rescue Room, a place where the Inca Atahualpa was a prisoner and where he left the mark that he offered to fill once with gold and twice with silver in exchange for his life.

A few kilometers from the city are the Inca Baths. These springs of thermo-medicinal waters are ideal to relax and take a good rest.

You can also visit the Cutervo National Park, located in the Cutervo province, in the eastern part of the Tarros mountain range. It was created to protect the caves of San Andrés and their guácharos (nocturnal birds). Another of its objectives is to preserve its varied flora of unique species, such as orchids.

Cajamarca was marked in history as the city of rescue. In it, the Spanish captured the last Inca, Atahualpa, who offered a room full of gold and two full of silver for their liberation. The promise was kept and still the Spanish executed it, officially beginning the conquest of the Inca empire.

Cajamarca region keeps, in addition to the weight of history, unique attractions: can you imagine a stable where cows are called by name to be milked … and they respond? Or a carnival party full of color and joy, celebrated for 4 consecutive days.

The department of Cajamarca is located to the north of the Peruvian territory, in the western chain of the Andes and covers areas of the mountains and jungle.

Cajamarca has the largest gold mine in South America. The area around the region contains ruins of several ancient civilizations. Few of them are well known, but they date from the time of the Early Horizon (1000 – 300 BC), while others belong to the Cajamarca culture (500 – 1000 AD).

Since the Incas took over the land in 1460, the city has evolved very slowly, so visitors can get a sense of what life was like all those years ago.

Unfortunately, in 1532 the capture of the Inca Atahualpa occurred here during the conquest of Peru and many of the original Inca structures were demolished by the Spanish.

Acoording the history of Cajamarca, the Spanish used the resources to build their own houses and churches. Still, a number of beautiful historic buildings populate the city.

The climate in Cajamarca is varied since due to its location there can be a lot of sun during the day but intense cold at night. The temperature is 15.8 ° C. Temperatures range from 21 ° C to 6 ° C.

The rainy season is from December to March, so it is the low season for tourists, even if you are encouraged to travel on these dates, it is recommended to bring warm clothes and rain gear.

In the months of April to November it is the dry season due to the absence of rain, a climate with clear skies, sun during the day, and low temperature at night.

Cajamarca is one of the most important colonial cities in Peru. The small city founded as San Antonio de Cajamarca, is located at a height of 2750 meters above sea level.

It has a population of around 228,775 inhabitants, its pleasant climate makes it the most suitable place for the production of cheeses and crops since it is surrounded by a fertile valley.

This region is one of the richest in culture and history in the entire country. The Andean highlands contain some of the most authentic remains of Peru’s bygone eras, from the time of the mighty Inca Empire of the 16th century and earlier civilizations.

The city’s Plaza de Armas is considered one of the most beautiful and spacious in Peru. A place known for being the scene where the fall of the Inca Empire was marked since in this square the Inca Atahualpa was executed.

The Cathedral of Cajamarca is one of the old buildings that can be visited, built in 1682. Among the characteristics of this cathedral it can be mentioned that it is considered one of the greatest architectural jewels of the American Continent.

In the Historic Center of Cajamarca you can also visit the largest church in the region; the church of San Francisco. Temple that began to be built in 1699, taking about 80 years to complete.

One of the tourist attractions of Cajamarca that can be visited in its Historic Center. The Rescue Room is an ancient Inca building, which was used to offer silver and gold to the Spanish in exchange for the freedom of the Inca Atahualpa. It is considered one of the most important historical places of Inca origin in this department and that can be found in the middle of the city. Inside this room you can see a horizontal red mark, which represents how far the Inca reached to raise his hand to fill the room with jewels.

A tourist trip in Cajamarca should take us to visit the Thermal Inca Baths in Cajamarca, 15 minutes from the capital city. According to historians, this place was used by the Inca Atahualpa in order to regain his strength. Currently, the Inca Baths in Cajamarca offer tourists the possibility of bathing in their hot springs, which can exceed 70 degrees. Being rich in minerals, important medicinal properties are attributed to it.

A necropolis made by the Cajamarca culture. It is characterized by having niches in the form of small windows. This funerary site is located in the town of Otuzco, within the district of Baños del Inca, 8 km from the city of Cajamarca. The niches of this archaeological site were made in the volcanic rock and are located in an area of ​​4 thousand meters.

A trip to Cajamarca gives us the chance to get to know the province of San Pablo, the shelter of the Kuntur Wasi Archaeological Complex, a place where various pieces of gold from ancient civilizations were found. The name of Kuntur Wasi means “House of the Condor”, a common animal to see in the stone sculptures of this place. Inside this complex the tombs of seven people were found.

The archaeological site of Cumbemayo is located 19 km from the city of Cajamarca. It stands out for being the ruins of an ancient pre-Inca aqueduct. The length of this construction is approximately 8 km and it was used to collect rainwater and transport it to the Pacific Ocean. Along this aqueduct, and in the caverns near this place, you can see some interesting petroglyphs.

Near this complex, is the Bosque De Piedras De Cumbemayo, whose rock formations were originated by volcanic erosions. Also known as Los Monjes de Roca or Los Frailones.

Porcón is one of the largest tracts of land that can be found in the Peruvian highlands. The main attraction of this place is the Porcón Farm, where a mini zoo is offered, which includes animals such as Otorongos, Spectacled Bears, Buffaloes, Pumas, Lions, monkeys and others. In addition, some of its inhabitants are dedicated to raising llamas and vicuñas.

Polloc town and the Sanctuary of the Virgen del Rosario

This place has gained a lot of popularity in recent years, since a beautiful architectural and religious work of art has been built in the middle of the city. This construction is known as the Sanctuary of the Virgen del Rosario. The main characteristic of this sanctuary is the great beauty of its decoration and its wood carvings.

This cemetery is more than 3,500 years old and is located in the community of Combayo, in the district of Encañada. This is considered one of the oldest necropolises in Peru and is part of the Capac Ñan or “Great Inca Trail”. The niches of this necropolis were made on the volcanic slopes of Cerro San Cristóbal. Most of the niches that you can see in this cemetery were made in rows and are rectangular in shape.