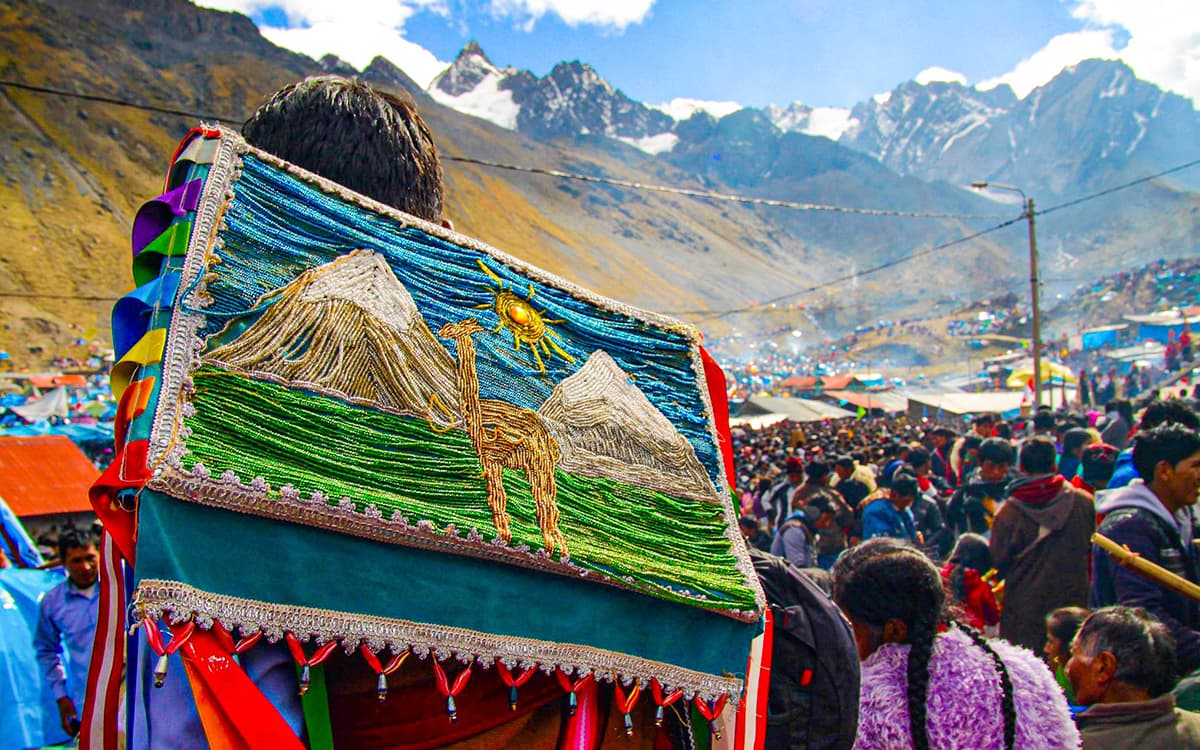 The Festival of the Lord of Qoyllur Rit’i Religion takes place in the province of Quispicanchis, district of Ocongate. It is made at the foundations of the Sinakara Valley in Perú.

The main ceremony takes place at the foot of Mount Ausangate, at 4,700 meters above sea level and at temperatures below 0 ° C.

They are accompanied by different dancers (chauchos, qollas, pabluchas or ukukus) who symbolize various mythical characters. The ukukus (bears) are the watchers of the Lord, as well as Apus and apachetas (mounds of stones placed by pilgrims, as expiated sins), and those who maintain discipline during liturgical acts. A group of strong Queros, residents of what is perhaps the purest Quechua community in Peru, disguised as “pabluchas”, leaves for the summits of the snowy mountain (6,362 meters above sea level) in search of the Snow Star that is enclosed in their bowels. Back in their communities, these strong settlers carry large blocks of ice on their backs to symbolically irrigate their lands with the sacred water of Ausangate.

The inhabitants of the district of Ocongate (Quispicanchis), in the department of Cusco, perform a rite whose external symbol is the image of Christ, but its underlying object is the integration of man with nature.

The ritual, associated with the fertility of the land and with the worship of the Apus (hills, tutelary gods), is part of one of the largest indigenous nations festivals in America. The main ceremony takes place at the foot of the snow-capped Ausangate, the ritual consists of a pilgrimage of shepherds, merchants, and onlookers who gather at the sanctuary in Sinakara Valley in Perú. According to belief, the Child Jesus, disguised as a little shepherd, appeared to an indigenous boy, Marianito Mayta, and the two became friends. When the parents found them dressed in rich attire, they notified the local parish priest, Pedro de Landa, who tried to capture him but without success, because a stone appeared in the place of the Child. Marianito died immediately and the image of the Lord of Qoyllur Ri’ti was fixed on the rock.

The pilgrimage to the Lord of Qoyllur Rit’i Religion takes place between the months of May and June, the date is movable.

The festival begins on the day of the Holy Trinity, when more than 10,000 pilgrims ascend to the limit of perpetual snow. Minimum temperatures are reached (-4 ° C). The road is accompanied by a procession, fireworks and the symbolic market of “las Alacitas” (miniature handicraft fair).

At more than 4000 meters above sea level, the Qulqipunku glacier looms over the Sinakara Valley in Perú. The icy tower and the mountain on which it rests are the center of a sacred annual event, the Qoyllur Riti. This holiday brings together thousands of pilgrims who gather to celebrate the Lord of Shining Snow.

Qoyllur Rit’i is a Quechua word that means “snow star” or “shining snow”. During the three-day festival, dancers in multi-colored skirts along with musicians with drums and flutes perform in a celebration that combines Catholic and indigenous beliefs.

Pilgrimage to the Christ of the Snow Star

The local people of the Andes know the festival of Qoyllur Rit’i Religion as a celebration of the stars. In particular, they celebrate the reappearance of the Pleiades constellation, known in Quechua as Qullqa, and associated with the beginning of the harvest and the New Year. For their ancestors, the Incas, the Pleiades were the source of life. They disappear from view in April and reappear in June.

For its part, the New Year is marked by the Andean peoples of the southern hemisphere at the winter solstice in June, and it is also a Catholic festival. The Andean people have celebrated this holiday for hundreds, if not thousands of years.

Every year in late May or early June, the Sinakara Valley in Perú fills with travelers who make a long pilgrimage to the snowy Qulqipunku, carrying tents and food. Recently, local pilgrims have been joined by foreign tourists who wish to witness the spectacle. Everyone must fight the frigid temperatures and the suffocating height in order to reach the sanctuary.

Qoyllur Riti attracts a large number of people from nearby towns, divided into two sectors: Paucartambo groups Quechua inhabitants from the agricultural sectors to the northwest of Sinakara Valley in Perú, and Quispicanchi includes Aymara from pastoral communities to the southeast. Every year, these small towns send a delegation of colorful dancers to the Qoyllur Riti Chapel, in the Mawayani district of Quispicanchi. Dressed in bright alpaca fiber clothing, they form a procession divided into four groups with different musical styles.

Christians take care of the crosses and carry the statues of the Lord of Qoyllur Riti and the Virgin up and down the snow-capped peaks. Devotees cut blocks of ice from the glacier and bring large amounts of ice from the top to share with the community. Villagers believe that melted water has healing powers. On the other hand, pilgrims with pagan beliefs wait until morning. The sun illuminates the Andes at first light, so they kneel to greet the sunrise.

The Lord of Shining Snow

The image of the Lord of Qoyllur Rit’i Religion appears engraved on the rock of the Qulqipunku mountain, and is venerated as a Christian-Andean divinity. According to Catholic legend, it is the representation of an image of Christ, painted by the locals in the exact place of the death of a child, and people go there every year to honor his memory and dedicate offerings to the sanctuary built around him.

The myth behind the festival claims that an indigenous boy named Mariano Mayta, who herded llamas, met a white boy named Manuel, with whom he became friends. In the course of their friendship, the herd of flames experienced miraculous growth and the white boy finally turned into a bright light that made visible the image of a crucified Christ on a tree. When Mariano died, he was buried in front of a large rock on which the image of Christ was painted.

Despite the sanctuary’s Catholic themes, it also reflects many of the Andean mythologies, including the close association with rocks and mountains depicting legendary characters. In addition to worshiping the figure of Christ, the Andeans worship the apus, or mountain gods, and the Pachamama, Mother Earth. There is no tension in the apparent contradictions between worshiping Christ and the environment. Jesuit priests contribute to the maintenance of the sanctuary.

Members of small towns and villages in the Peruvian Andes travel from near and far in groups called “nations,” bringing their own miniature icon of Christ or Mary to place next to the sanctuary. Many of them carry musical instruments or wear colorful costumes. They perform choreographed dances and sing their own songs throughout the celebration.

The most notable aspect of the festival is the dance. The Qoyllur Riti pilgrims bring with them large groups of dancers and musicians divided into four main styles: ch’unchu, qulla, ukuku and machula.

Each of these nations has its own ritual dress and dance routine. The Ch’unchu, who represent the indigenous inhabitants of the Amazon rainforest, wear headdresses crowned with feathers and a wooden staff. The Qullas represent the Aymara settlers of the Altiplano, and they wear masks with large noses and wide smiles, a woven sling and llama skin; while the machula wear full body condor suits.

Finally, the famous ukukus are the ones that stand out the most among dancers. They dress in a dark coat and a woolen mask. They also carry whips, intended to symbolize half man, half bear creatures. They play the role of tricksters; they speak in high-pitched voices, play jokes, and maintain order among the pilgrims. In Quechua mythology, the ukukus are descendants of a woman and a bear, feared by all for their supernatural strength.

The descent in the morning involves a waterfall of bright colors. The noise and the bodies are disorganized, all following the path of their own nations. But instead of turning into a chaotic hubbub, the dancers, musicians and pilgrims give way to a harmonious celebration worth observing.

What is the best season to visit the Sanctuary of the Lord of Qoyllur Rit’i Religion?

Although the sanctuary of the Lord of Qoyllur Rit’i Religion is open during the year, the best seasons are in the months of May or June, depending on the date of your pilgrimage because there you will see and experience syncretism, and the important activities.

In addition, it is a dry season where there is not much rain, but it looks snowy and the snowy mountains are loaded.

How to get the Sanctuary of the Lord of Qoyllur Rit’i Religion?

Being from the city of Cusco, we go to the bus stops or simply take a private taxi that takes us from Cusco to Mahuayani with an average amount of 80 soles or a collective taxi that will cost us 30 soles per person.

If we want something cheap, we must go to the stops that are near the Regional hospital or the Closed Coliseum, from where the buses leave for Mahuayani every certain hour depending on how quickly it fills, the cost ranges from 10 soles to 15 soles, for a time of more than three hours by the interoceanic road (Cusco – Madre de Dios), until we reach the Mahuayani town, from where we will ascend almost 9 kilometers until we reach the sanctuary of the Lord of Qoyllur Rit’i.

In this walk we will find 9 crosses along the way where the pilgrims pray to each one of them; by the way, the road is slightly narrow and steep, at least for the first two kilometers and for the last three kilometers, for the rest it is somewhat flat.

Another option that may be, is to hire the services of a travel agency, for this you must use the Pilgrimage service of the Lord of Qoyllur Rit’i.

How much is the cost?

To enter the Sanctuary of the Lord of Qoyllur Rit’i, no type of payment is required, except the entrance to the toilet services

What to Bring to the Pilgrimage?