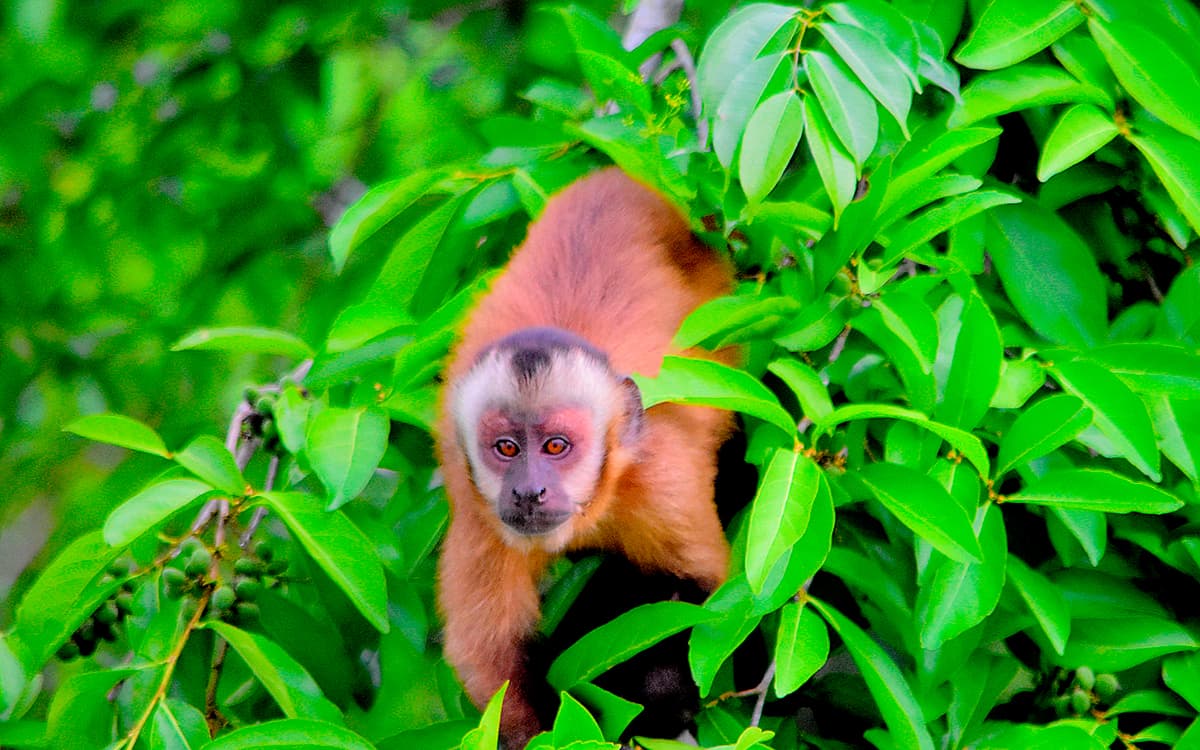 The Tambopata National Reserve is located south of the Madre de Dios River in the Tambopata and Inambari districts of the Tambopata province, Madre de Dios department; and its extension is 274 690.00 hectares. The presence of this important protected natural area seeks to conserve the flora, fauna and ecological processes of a sample of the tropical rainforest. Likewise, the RNT generates conservation processes that ensure the sustainable use of natural resources and the landscape.

The Tambopata river basin has one of the highest rates of biological diversity in the world. The Tambopata National Reserve is located in the middle and lower area of ​​this basin, neighboring the city of Puerto Maldonado. Among its most common ecosystems are aguajales, swamps, pacales and riverine forests, whose physical characteristics allow local people to take advantage of natural resources.

It is also located contiguously with the Bahuaja Sonene National Park that entirely surrounds it to the south, forming with it a highly important protection unit for the country. The existing connectivity with the protected natural areas of the department (the Amarakaeri Communal Reserve and the Alto Purús and Manu national parks) and those of neighboring Bolivia, supports the existence of the proposed Vilcabamba – Amboró biological corridor.

The Tambopata National Reserve houses mainly aquatic habitats that are used as stopovers for more than 40 species of transcontinental migratory birds. The national reserve protects important species considered in danger of extinction and offers tourism a privileged destination for observing the diversity of flora and wild fauna.

Officially created in 1990, as a Tambopata – Candamo Reserved Zone, it is located to the East and South of Puerto Maldonado. It is made up of 1.5 million hectares (3.5 million acres) in the Madre de Dios and Puno regions.

The Tambopata National Reserve has been the subject of numerous television documentaries. We invite you to visit one of the largest macaw and mammal clay licks in the world. You can also visit the pristine Sandoval Lake. In this region, a person can walk a mile through the jungle and never find two trees of the same species. Much of this diversity is due to flora, millions of species of insects and animals, heat, and humid climate.

Like the Manu National Park, the Tambopata National Reserve protects a great diversity of landscapes and wildlife, including lakes with herons, kingfishers, alligators and giant otters, spectacular waterfalls, incredible clay licks visited by hundreds of macaws. , monkeys and tapirs; swamps full of palm trees where different birds nest, rivers with white sand beaches for camping. All of these wonders attract tourists, scientists, and wildlife photographers.

The Tambopata – Candamo region holds several world records for flora and fauna in the region: 545 species of birds in only 5,500 ha. 1,122 species of butterflies, 151 species of dragonflies, and 29 species of tiger beetles.

In 1996, part of the Tambopata Reserved area was declared Bahuaja-Sonene National Park. This new protected area that borders the Madidi National Park of Bolivia constitutes the largest binational park in the world.

The “Collpa” is a Quechua name for the places where many species of animals congregate to eat mineral salts from the soil. Scientists believe that this behavior complements the diet of these animals. However, others believe that ingestion of soil reduces the toxic effects of some wild fruits and seeds.

The spectacular clay licks of the upper Tambopata river have made the Tambopata National Reserve famous. Hundreds of individuals of various species of parrots and macaws gather in this place. There are also smaller macaw clay licks in the Heath River

Some of the common species seen in these places are the blue and gold, scarlet, red and green macaw as well as blue-headed parrots and parakeets. Monkeys, tapirs, deer and capybaras are also frequently seen,

The Chuncho clay lick is a low cliff located along a tributary of the Tambopata, 5 hours upriver from Puerto Maldonado (40 minutes from WASAÍ Lodge).

The Colorado clay lick is located one hour upriver from the Chuncho clay lick, it is a cliff of higher altitude.

They are located near the Bolivian border and contain large areas of grasslands of more than 100,000 ha. There is no forest, only bushes. The fauna is very rich and two endemic species are found here, a type of fox known as a maned wolf and a type of deer from the wetlands. This is the only area that shows these unique characteristics within the Peruvian jungle and, therefore, it was not initially considered a National Sanctuary and, more recently, it was included as part of the Bahuaja Sonene National Park.

The climate corresponds to that of a subtropical forest, humid or very humid, with an average annual temperature of 26ºC, fluctuating between 10ºC and 38ºC (Rasanen, 1993, cited in CI-Peru, 1999). Low temperatures are associated with the presence of cold winds that come from the Antarctic through the Andes. The presence of cold winds determines the occurrence of what is called in Madre de Dios as “friaje” which is the drop in temperature with days of overcast skies associated with persistent drizzles, the cold lasts from two to three days although occasionally These events occur with greater intensity – frequency – in the months of June and July (Shenck, 1999). Maximum temperatures reach 38ºC and occur regularly in the months of September to October. Annual precipitation ranges from 1600 to 2400 mm (Rasanen, 1993, cited in CI-Peru, 1999) marking two seasons for the frequency and amount of precipitation: a dry season between April and December and a rainy season in January. to March, although the time limits are variable.

Here it is possible to observe groups of rare animals such as the Giant Otter or River Wolf, Sajíno, Sachavaca, Anaconda, Jaguar, Ocelote, Paujil, etc. who still lead a quiet existence. The avifauna of the Tambopata National Reserve is incredibly rich with approximately 590 species; that is, more species than can be found in the entire United States.

The studies report 103 species of amphibians, 632 species of birds, 169 of mammals, 103 of reptiles and 205 species of fish, and important numbers for invertebrates, among which the elidoptera (112 species of diurnal butterflies) and Odonates (151 species)

The great richness of species present in the reserve makes this area especially attractive for tourism. In it you can see the clay licks in which you can see a number of macaws and other areas that allow the observation of mammals such as the sajino, the huangana, the sachavaca and the majaz or picuro. Other striking species are the pink spoonbill, the jungle condor, the harpy eagle, and at least 14 species of herons that can be seen in the course of the river or in the forest.

There is a list of 1,255 plants identified at the product species level. However, the Reserve is not only characterized by its richness of species, but also by hosting economically important species whose populations support or endured use pressures exposing them to some degree of threat, such as chestnut, mahogany and shiringa.

According to the map of forest types in the Tambopata National Reserve and its buffer zone there are eight types of forest, distributed as follows:

The most visited tourist destination is Lake Sandoval, located in the Madre de Dios River basin. This 127-hectare body of water is surrounded by palm trees full of macaws and is only half an hour by river from Puerto Maldonado. In its waters, which can be traveled in tour boats rented by local people and shelters, there is a large family of river wolves that can be seen hunting and preening on the logs. There is also an observatory tower for a panoramic view.

Lake Sandoval is one of the most visited attractions in the Tambopata National Reserve.

Crossing the Tambopata river is the El Gato creek with its waterfall. Very close to there are the Baltimorillo rapids. The characteristic attractions of Tambopata are the clay licks that are found on the banks of the rivers, gathering hundreds of birds (macaws, hawks and parrots) offering a spectacular show of color and sound (all this especially between 5:30 and 9: 00 hours).

The boats that transport tourists and residents must have authorization from the National Service of Natural Areas Protected by the State (Sernanp) to be able to navigate in the area.

The Amazonian clay licks are one of the main attractions for travelers arriving in Tambopata, especially for bird watchers who travel the world.

To facilitate the presence of visitors, the National Service of Natural Areas Protected by the State (Sernanp) has implemented, together with the communities in the area, shelters along the channels of the Tambopata and Madre de Dios rivers. Most have amenities for visitors and the use of natural resources is respected.

Tambopata is one of the privileged places for bird watching.

Along the way there are towers over 30 meters high that will help to better observe the landscape and understand the role of forests on the planet.

Some other touristics routes in Cusco are the salkantay trek tour, considered a National Reserve and the most fmaous is the classic inca trail 4 days 3 nights.

How to get to from Cusco to Tambopata?

The city of Puerto Maldonado is the starting point for jungle explorations in the Tambopata area.

The traditional way to get from Cusco to Tambopata Puerto Maldonado is by air with flights of 90 and 30 minutes respectively. From Cuzco it can be reached through the Interoceanic Highway (30C), which also connects it with Iñapari, the border point with Brazil.

The arrival and departure of flights in Puerto Maldonado is fully coordinated by the tour operators in the area and the lodges and lodges, who move their boats to receive passengers on time upon arrival, and be on time at the port for the transfer. of passengers to the airport for outbound flights. Tourists traveling to Tambopata with tours do not require taxi services at the airport.

The city of Puerto Maldonado is connected through the Interoceanic highway with the main cities of southern Peru, such as Cuzco, Puno and Arequipa, from where it connects with the Pan-American highway. Along this same highway to the north it also connects it with Iñapari, the border point with Brazil and continues towards Rio Branco.

The main river, the Madre de Dios, does not have extensive fluvial traffic, because in the area of ​​Brazil there are waterfalls that prevent navigation in all its extension and its connection with the Amazon River and exit to the Atlantic.

River transport is carried out in smaller boats, regionally. In the rivers they are traditional the “small small” a motorized canoe, the “pecamari” boat, a medium and roofed boat, the “slider” boats with powerful outboard motors, some dedicated to transporting people and others exclusively for cargo, with regular itineraries or they can be taken for private service.